Yet another setback for PG&E wildfire victims 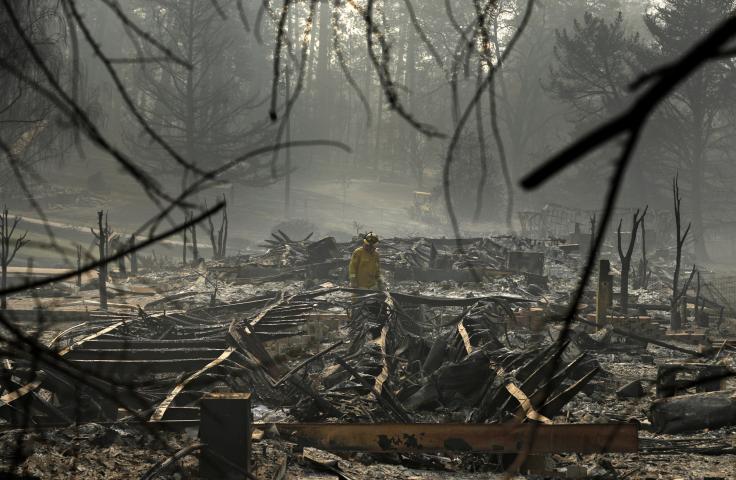 A firefighter searches for human remains in a trailer park destroyed in 2018's Camp Fire.
photo credit: John Locher/AP Photo
All roads lead to Sacramento.
That's one takeaway from the convoluted series of events that led to tens of thousands of PG&E wildfire victims losing one of their top advocates in the state Capitol this week -- just one day after veteran lobbyist Patrick McCallum pitched Gov. Gavin Newsom's staff on the idea of a $1.5 billion loan to ensure survivors are fully compensated.
The PG&E Fire Victim Trust announced Wednesday that it and McCallum had "agreed to part ways, effective immediately, in light of certain recent publicly disclosed developments."
Those developments could pose problems not only for the already beleaguered Fire Victim Trust -- which a KQED investigation found has been slow to pay victims and quick to rack up big bills for lawyers and consultants -- but also for the California State University system.
McCallum, who is married to Sonoma State University President Judy Sakaki, allegedly sexually harassed several women at a party at his house. The women reported the incidents to then-provost Lisa Vollendorf, who in turn reported them to CSU officials, prompting retaliation from Sakaki, according to a claim Vollendorf lodged against CSU and which the system paid $600,000 this year to settle, according to investigations from the Santa Rosa Press Democrat and the Los Angeles Times. McCallum denies the allegations.
Sakaki, who denies retaliating against Vollendorf, initially defended her husband but announced Monday that she is separating from McCallum. She's now facing challenges of her own: The executive committee of Sonoma State's academic senate voted Thursday to advance a vote of no confidence in her leadership, and Democratic state Sen. Bill Dodd of Napa said her response "deserves close scrutiny by the CSU chancellor and board of trustees as to how the interests of students and employees can be best served going forward."
It's the latest scandal to embroil CSU, whose chancellor resigned in February amid accusations that he mishandled sexual harassment complaints against a high-ranking colleague while president of Fresno State. The system has since launched multiple independent investigations into its own policies.