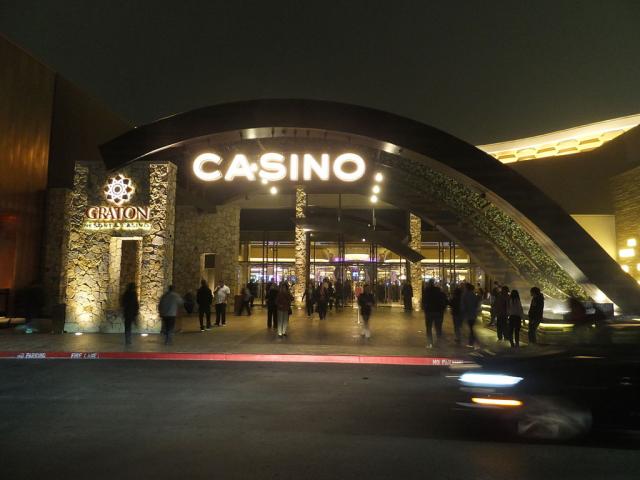 The entrance to the Graton Resort & Casino in 2013.
photo credit: Wikimedia Commons/Kaaaaal
The Federated Indians of Graton Rancheria in Sonoma County are seeking to expand the Graton Resort & Casino by as much as 50 percent, according to a notice of preparation filed by the tribe earlier this month.
In addition, Sonoma County is seeking input from the community regarding the proposed project.
The tribe plans to submit a tribal environmental impact report in preparation for the possible expansion. Approval of the expansion would come from the federal government, not local officials, though the county board of supervisors can submit an opinion on the project to the feds.
Last week the supervisors issued a formal opposition to the Koi Nation of Sonoma County, which seeks to build a casino southeast of Windsor. The board's reason for the opposition, however, is that the county claims that the Koi do not have a sovereign ancestral claim over the land, unlike the Graton Rancheria tribe.
Just as with the proposed Graton expansion, the ultimate decision rests with the federal government.
The upwards of 300,000-square-foot Graton Resort opened in 2013 west of Rohnert Park on federal trust land. Currently, the site consists of a gaming area, 200-room hotel and banquet facility, a spa and parking. The tribe is proposing an expansion of the casino floor by 144,000 square feet; a new, five-level hotel wing with 221 rooms with associated parking, a 3,500 seat theater, a rooftop restaurant, and an expansion of the pool area.
The environmental impact report will address several potential impacts, including noise, traffic, water resources, biological resources and greenhouse gas emissions. The tribe says that the additions could cause "changes to the visual character of the area," according to the notice of preparation.
Any expansion would be built on paved or "already disturbed areas," having no impact on agricultural areas and minimal impact on sensitive habitats, the tribe says.
Sonoma County is encouraging residents to review the Notice of Preparation of the project and give feedback to the county by May 4, so as to "inform" the county's own official response to the proposal.
To view the NOP, go to https://www.gratonteir.com/wp-content/uploads/2022/04/nop-casino-expansion.pdf.
Residents can send in their comments and concerns about the NOP to This email address is being protected from spambots. You need JavaScript enabled to view it..