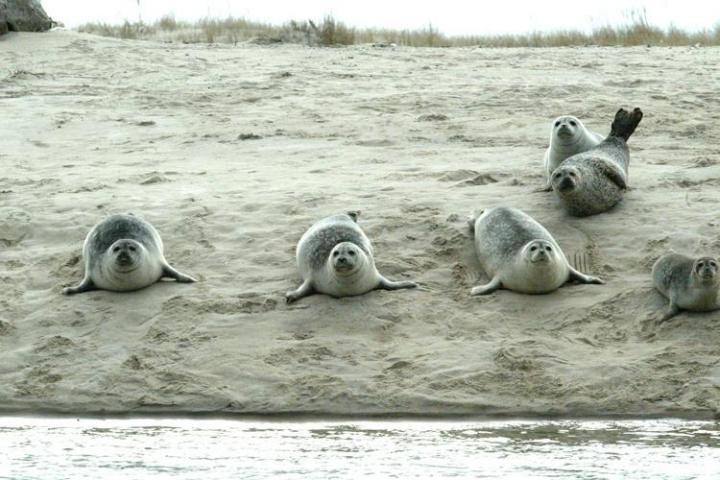 Harbor seals along the California coast.
photo credit: National Oceanic and Atmospheric Administration
In a natural, annual spectacle tens of thousands of harbor seals are ashore, nursing newborns in small groups and giant colonies.
Federal scientists charged with protecting the speckled marine mammals say beachgoers fairly frequently misinterpret what they're seeing.
Sarah Codde is a marine ecologist with the National Park Service at Point Reyes.
"People will pick up harbor seal pups because they think they're abandoned," Codde said. "They might find them by themselves on a beach and they'll pick them up and actually hike them back to a place where they can call either park service rangers or the Marine Mammal Center; they've hiked miles away from the beach with a harbor seal pup."
In the vast majority of cases however, that pup is no orphan.
"Really what happens more often is that a mother leaves her pup on the beach while she goes to feed and is going to come back to her pup," Codde said.
Even observing a seemingly orphaned pup---from what would seem a safe distance, can have severe consequences. The pup's mom may very well interpret interlopers as a threat.
"She's going to be too afraid to come back on the beach with a bunch of people standing around a pup," Codde said.
While they've sprung back from 19th century hunting and aren't considered endangered or threatened, Pacific harbor seals are protected by the federal Marine Mammal Act. Less gregarious than California sea lions, harbor seals are generally quieter and more skittish--prone to ungracefully flopping across the sand into the ocean at the approach of the unexpected. A flush---essentially a stampede of seals---atop the disruption to the colony, can easily separate seals from their offspring. That's why officials recommend staying at least 300 feet away from seals--the length of a football field.
"That really does give that female kind of the comfort level to return to the beach to get her pup," Codde said
Pupping season along the California coast runs from mid-to-late March through the end of May.
(Editor's note: Audio of young harbor seals courtesy of the Marine Mammal Center in Sausalito.)