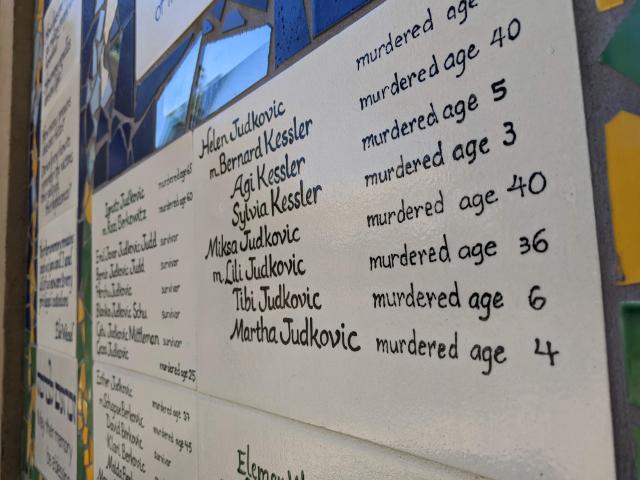 Most of Judd's extended family were executed by the Nazis
photo credit: Marc Albert/KRCB
A simple, four-sided pedestal with four faucets for ritual handwashing was recently re-installed at Santa Rosa Memorial Park after being damaged a second time in two years. Intended as a place of reflection to honor victims of the Nazis, repeated vandalism has left a feeling of unease among some in the local Jewish community, and also brought shows of unity and support.
It doesn't much stand out from Franklin Avenue, but up a gentle rise, a beige edifice has stood for about six years, listing by name members of Dennis Judd's extended family; aged three to fifty, lost to an ideology that culminated in slaughter on an industrial scale across Europe.
Judd commissioned the wall, and a year or two later, a small fountain, replacing a simple faucet for ritual hand-washing. Meant to honor his parents and their dedication to sharing stories of the privations, torture and inhumanity they endured during the holocaust, in hopes of preventing the intolerance, discrimination and hatred that grew into a furious campaign to eradicate people designated sub-human at places like Auschwitz, Majdanek and Treblinka.
Reached on a recent Monday, Dennis Judd says in the re-telling of history, stories get simplified, sanitized. That there are so many more facets and complexity.
"These were families. It wasn't just a group of six million people who get lost in the number. They were individual kids and different people who had names, that had lives that were killed. During the holocaust there were no cemeteries, there were no graveyards, there was no way to remember, no place to really remember people because they were gassed, they were incinerated, it was just ashes, or they were machine gunned down into pits. So this became a place to put the names together of their family members."
When the fountain was toppled and broken two years ago, there wasn't much time to grieve. As word spread, individuals and groups rushed forward, Judd said.
"Though it was busted up, and we don't know who did it, when we got the word out. The community came together at the time and helped with the funding and we were able to get it repaired and we were able to start transferring funds over to different educational programs that teach about the Holocaust and genocide."
Rather than replace, Judd sought repairs. Rather than hide the cracks, Judd had them filled with blue mortar--showing resilience and resistance to intimidation.
For those considered lucky enough to be sent to a work camp---most, the elderly, the young, the sick and infirm, were immediately gassed---the end could still come at any time. Judd relayed that his mother Lillian, and other women, did busy work at gunpoint--carrying large rocks up a hill, only to then haul them back down.
"And, it wasn't just the Jews, it was the Roma, Gypsies, it was political prisoners, Seventh-Day Adventists, and if it was anybody with a physical ailment or a mental ailment, they were slaughtered too."
Toppled and cracked a second time in January---Santa Rosa Police say they have no leads---Judd said he again opted for repairs.
"This time we're going to use the color red to show where the cracks are to show where it was repaired and sealed back together and my thinking is, that the community came together to help support what we're doing here and showed that the, basically the distaste for anybody who would think to do damage to a holocaust memorial like this and hatred and so forth that comes with it. The community united itself. In my mind its the blue community came together and the red community it didn't matter. The people that have given support have been liberal, they've been conservative, they've been all different religions, all different colors its just everybody has come together and people of all different walks of life do not approve of what just happened."
As distasteful and fear inducing as the intentional destruction of a piece of symbolism is, Judd has mostly turned the page. Rather than concern about who or what lurks in the shadows, Judd is basking in the positivity that a hateful incident is apparently breeding unity, not division, in the community.