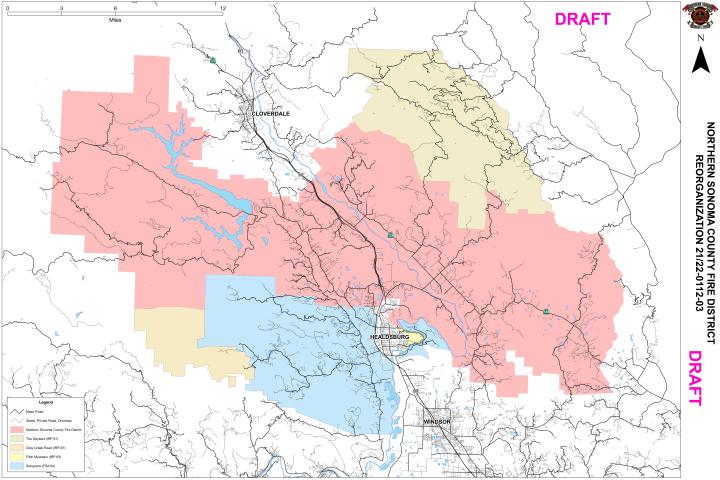 Courtesy of Sonoma County
photo credit: Under the agreement, the NSCFD will now include the Geysers geothermal field.

Sonoma County officials recently approved tax and revenue sharing agreements with the Northern Sonoma County Fire District (NSCFD), which will annex areas like the Geysers, Sotoyome, Fitch Mountain and Red Slide/Mill Creek Road. This increases the Northern District’s footprint from 273 square miles to just under 400 square miles; approximately a quarter of Sonoma County. It will receive $1.2 million annually, with most of the funds coming from property taxes, and the county board of supervisors approved a total of $9 million in funding.

There are plans for most of the district's annual $1.2 million budget already. District Chief Marshall Turbeville said approximately $275,000 will go towards having a second firefighter staffed 24/7 for the Northern District. The Healdsburg Fire Department currently responds to the Sotoyome, Fitch Mountain, and Red Slide/Mill Creek areas, and another $200,000 will go to Healdsburg to continue servicing those areas. Since for several years the county has been providing the Cloverdale Fire Department $275,000 a year, Turbeville plans on that amount coming from his budget as well. Turbeville said the remainder of the funds will be invested in local community services.

“We're big into what's called 'Communities Organized to Prepare for Emergencies,' or COPE," Turbeville said. "It's essentially based on neighbor helping neighbor. If somebody's choking, it's more highly likely that your neighbor's going to help you before the fire department gets there, we just have really lengthy response times, we cannot deliver city-level type services.”

Turbeville also said some of the funds will go towards fire preventative measures, even more crucial in the western portion of Sonoma County

“It's not grass, it's not brush and it's not high-density housing either, so it's gonna be a forest burning," Turbeville said about any future wildfires in the area. "The Tubbs fire, I was there, it took about five hours to go from Calistoga to Santa Rosa. When you think about that distance from Forestville to the ocean, it could easily happen in 12, 10 hours.”

Roughly 40% of the Northern Sonoma County Fire District burned in the 2020 Walbridge, 2019 Kincade and 2017 Pocket Fires. The areas under the Northern District’s jurisdiction aren’t highly populated, but they do pose a much higher fire risk, said Turbeville.