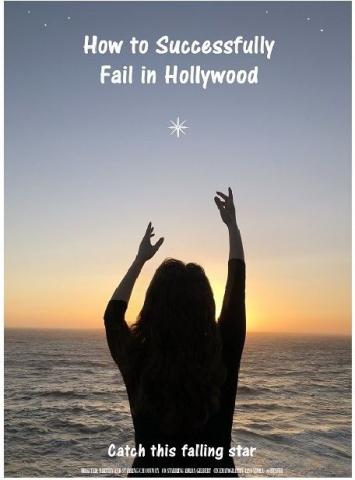 Actress and writer C.M. Conway, who lives in Occidental, decided her book idea could be a fit for the big screen. So she recruited film industry friends and acquaintances from around the state to help her shoot the film at the end of 2019.

For so many who make their way  to Los Angeles in hopes of a star turn - those dreams often go unfulfilled.  Conway, who spent time on screen and stage in LA, realized that in failure her own and that of other striving actors a film was there to be made.  Enter: How to Successfully Fail in Hollywood. Conway said her film comedically flips the script on what success in Hollywood looks like.

"The film follows Ellie. That's played by myself and her LatinX friend, Ben, who is played by Adrian Gilbert." Conway said. "And Ellie's a bottom feeder actress in Tinseltown who has a life changing event happen with her LatinX friend, Ben, and a surreal twist on with comedic results where she unwittingly becomes the key to a new take on Tinseltown where failure is the star."

Conway, who said the film was very much inspired by her personal experiences, hopes the film can help de-stigmatize failure for those in the industry, and in general.

"Failure has a societal stench, and I just believe we need to look it in the eye and laugh." Conway said. "And in the industry, no one wants to admit failure. No one wants to film that isn't gonna be doing well. You know, everyone wants to, to be doing great the opening week when no one wants to talk about failure."

Conway said the film is ultimately for the many actors who experienced Hollywood like her.

"So it's really an ode to the struggling artists that really comprise about 90% of any entertainment industry at any given time." Conway said.

More information on the film can be found online by searching: How to Successfully Fail in Hollywood.