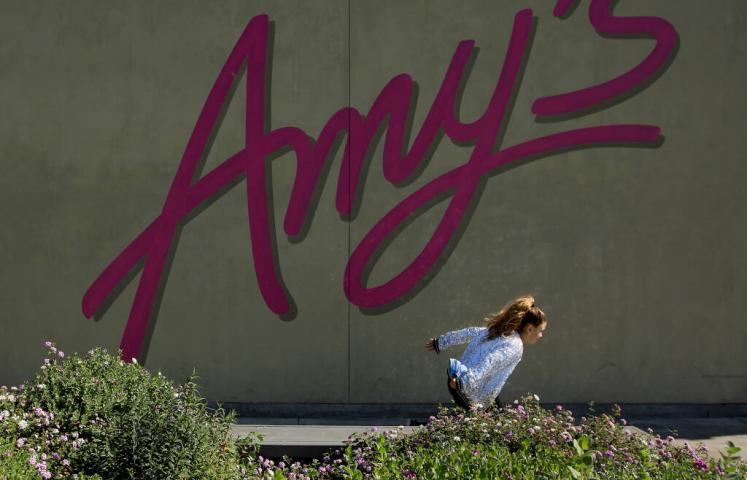 photo credit: Courtesy Kent Porter/The Press Democrat
Petaluma-based food company Amy’s Kitchen has come under increased scrutiny in recent months following a controversial NBC News report on working conditions in its Santa Rosa factory. Last week KRCB spoke with local union organizers, who alleged unsafe working conditions. To hear the company's viewpoint, on Wednesday, KRCB spoke with Amy's Kitchen executives about the allegations.
Tony Delorio, a member of the Local 665 Teamsters Union, helped draft the CalOSHA complaint filed against the facility in January. He's also helping with efforts to unionize the facility. When asked about working conditions at Amy’s Kitchen’s Santa Rosa production facility, Delorio alleged workers had lost fingers in workplace accidents and injured workers had been rushed back to work.
"Employees basically have told us that the staff there has come out and said, well, they want you back to work. So we need to send you back to work. You know, they're getting sent right back with arm slings saying, get back on the production line. Or if you're you're too slow in the production line, then we need you to wipe down these tables with one hand while your arm sitting in a sling. I mean, so they're controlling of, of, of medical facility where they send, you know, their, their workers when they're injured. I mean, it's so they're acting like they're doing this great deed, but really it's just another controlling factor." Delorio alleged.
But when asked about Delorio’s allegations, Paul Scheifer, Amy’s Senior Director of Sustainability, pointed to the facility’s sterling safety record.
"We have one of the best safety records in our industry, twice as good as the standard that we follow." Schiefer said.
Scheifer, the nephew of Amy’s Kitchen founders Andy and Rachel Berliner, said the company’s focus has always been on caring for employees.
"They always have, and always will have a really deep respect for workers and, and creating a great place of work. And they've made so many choices over the years, be it, you know, one of the very first companies to ever put high quality onsite healthcare and make that available in two languages for all employees to, you know, 1400 scholarships given to the children of, of our workers, some of the absolute best in class healthcare benefits." Schiefer said.
Regarding Delorio’s allegation that injured workers are being pushed back to work by healthcare practitioners at the Amy’s Family Health Center at the Santa Rosa facility, Scheifer said workers injured on the job are treated off site at appropriate urgent care facilities.
"First of all, I want to make crystal clear is that any workplace injury would never go to our onsite healthcare. This is a primary healthcare center that's for routine healthcare needs. There's never been a situation or would be a situation where a workplace injury would go to our own healthcare clinics." Schiefer said.
Scheifer also acknowledged the potential conflict of Amy’s directly managing the health clinic, an issue he says is addressed through an outside provider.
"It is managed by a third party called Vera, which we do because there needs to be an arms length between a healthcare situation and an employee and work. So we don't actively manage it." Schiefer said.
Scheifer said the recent controversy has come as a surprise to Amy’s, but that they are committed to being transparent.
"We've all been a little surprised and maybe saddened by what we believe is somewhat of an aggressive campaign to demean our business that this union has sort of launched recently, but I think we're, you know, we're here to be as absolutely transparent as we can, you know, speak to the record, speak to the truth of who we are and how we operate. I think we recognize we're we're not perfect. No company is, uh, but we certainly are trying as hard as we can, as hard as we know how to that become the best company we can."