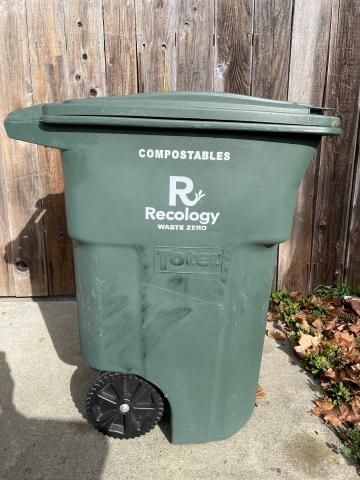 photo credit: Courtesy Noah Abrams/KRCB
When State Senate Bill 1383’s organic waste and food diversion regulations took effect at the beginning of this year, municipalities up and down the state found themselves needing to develop new capacity for composting. As well as new oversight for diverting unused edible food to recovery services for redistribution to food insecure Californians.
While many Sonoma County municipalities, like Cloverdale, already have residential and commercial compost programs in place, the new regulations require stricter compliance.
Celia Furber from Recology Sonoma Marin, the waste collection company that serves most of Sonoma County, including Cloverdale, said the city is already well positioned to meet commercial composting requirements.
"In 2017 compliance was only 22%. And, by the end of 2021, we were able to grow that compliance number to 89 per percent." Furber said.
That’s in addition to increasing diversion of waste bound for landfills.
"We've actually had great progress in Cloverdale in 2018. The landfill diversion rate for the city was 39%. And in 2021, it grew to 45% in 2017." Furber said.
Despite Cloverdale's efforts, local businesses, and Recology; residents still face a rate increase for waste collection. That's thanks in part to increased costs from SB1383 compliance and from regular operations. As Furber explained, the rate increase, which is needed for Recology’s Cloverdale operations to remain viable, could follow two different paths.
"Option one is a stepped rate increase plan over the course of four years. If you stagger it over time, it's, it's not such a big increase all at once versus option two. It's a one time extraordinary rate increase of 51%. That's the rate increase needed at the point where we are actually covering our expenses." Furber said.
While the Cloverdale City Council ultimately voted to conduct a review of Recology’s services, instead of signing a new contract, compliance with new state regulations will still have to be met.