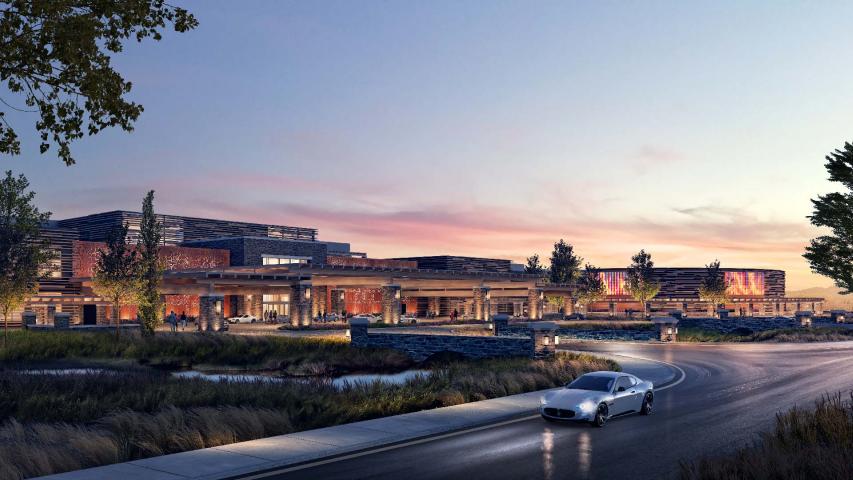 A conceptual image of the proposed casino resort.
photo credit: Courtesy of the Koi Nation
A proposed Native American-owned casino just south of Windsor is running into official opposition.
Sonoma County supervisors are being asked Tuesday to consider officially opposing a planned multibillion dollar gaming operation on what's now a vineyard off Shiloh Road south of Windsor.
Leadership of the Koi Nation, a band with roughly 70 enrolled members, say they are being blindsided. Sam Singer is a Koi Nation spokesman.
"We are surprised and troubled that this resolution was placed by Supervisor Gore on the Board’s agenda without any notice to us," Singer said.
The item though, isn't a maverick initiative by the board's chair. There is community opposition. Anti-casino signs have gone up in the area. Letters and resolutions strongly opposing the project have also been submitted by four local tribal governments: the Dry Creek Band of Pomo Indians, the Federated Indians of Graton Rancheria, the Lytton Rancheria of California and the Kashia Band of Pomo Indians of the Stewarts Point Rancheria.
The Kashia Band's resolution describes the Koi Nation as "reservation shopping," noting the group tried and failed in efforts to construct a casino near Oakland Airport and on Mare Island. Three of the four tribes say they would support a Koi casino in Lake County.
The four tribes and Sonoma County officials have cast doubt on the Koi's connections to Sonoma County, arguing the band's ancestral lands are in the vicinity of Lower Lake in Lake County.
A resolution of the issue is complex and could be drawn out, including federal adjudication.
Meanwhile, tribal spokesperson Singer says the Koi Nation, which recently partnered with the Chickasaw Nation of Oklahoma to develop and operate the casino, has been entirely up front.
“The Koi Nation has been, and will continue to be, open and transparent throughout the process of taking our land into trust for the benefit our members and the entire Sonoma community,” Singer said.