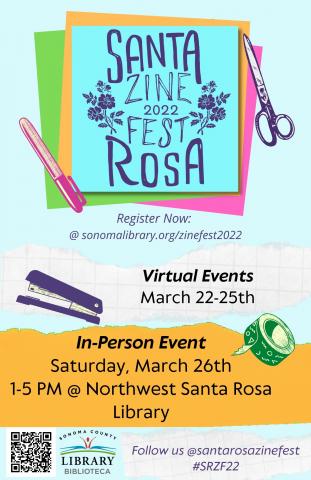 photo credit: Courtesy Santa Rosa Zine Fest
The Santa Rosa Zine Fest, a celebration of the DIY publication style, returns this week for its second annual event after a hiatus in 2021. The festival includes a series of webinars on topics like “liberation through art,” demonstrations on printing and binding methods, and a Spanish language workshop on lithography.
Mer Morgan is one of the Zine Fest organizers. Morgan said a conversation with co-organizer Melissa Andrade sparked its launch.
"Wow. We know so many great artists, so many great creators in Sonoma county." Morgan said. "They're making art, we should have something for all of those people to meet each other."
And a festival is the perfect medium for including diverse artistic voices.
"We wanted to bring the energy of zines, which is punk and DIY and putting your artwork out there. Even if everybody's told you that it's, you know, not palatable or not acceptable." Morgan said.
Amanda Ayala, who identifies herself as a Xicana-Indigenous artist from Santa Rosa, hosts the Festival’s “Binding, Printing and Connecting” webinar. Ayala said zine making has introduced her to different book-binding methods.
"The influence of like indigenous peoples from Mexico, where my ancestors are from how, they like did book binding in a different way, you can lay them out in a way so that you can like pull the book apart, like in accordion." Ayala said. "And then you can see all the pages and set it on a table."
Andrew Mecum from the Northbay Letterpress Arts presents a webinar on letterpress printing. Mecum said at Northbay Letterpress,
"You’re taking something that’s 600 years old and then trying to adopt it to some more contemporary concepts and ideas." Mecum said.
It’s also a method which he said has a long history with independent zine-style publications.
"There's a tradition in letterpress printing, which is called a chap book. And that was essentially a realization about a month ago that, that is the zine. That's the first form of a cheaply made quickly produced independently created tool to share messaging." Mecum said.
The Santa Rosa Zine Fest concludes with an outdoor festival at the Northwest Santa Rosa Library.