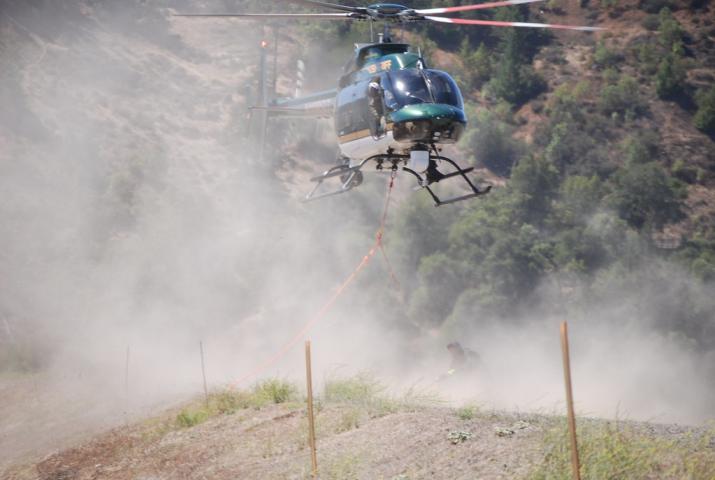 Sonoma County Sheriff's "Henry-1" helicopter.
photo credit: Credit: Sonoma County Sheriff's Office
Facing a financial conundrum, Sonoma County supervisors Tuesday punted a decision on the future of the sheriff's department's helicopter.
In the end, one-time money will keep the whirlybird in the air another year, but a day of reckoning lies ahead for a county helicopter mainly used for law enforcement.
The chopper wound up on the block due to a financial shortfall two years ago, but officials found enough cash, and gave themselves what was thought to be enough time to find a creative solution. That didn't happen, said Supervisor Lynda Hopkins. "Between pandemic, drought, vaccination efforts, I think that unfortunately that conversation, that robust conversation, did not occur."
Sonoma County Sheriff Mark Essick noted the county isn't mandated to operate a chopper, but supervisors were reluctant to surrender any search and rescue ability. A search for alternatives resulted in a report founding drawbacks with partnering with other jurisdictions, including CHP, the Coast Guard or other counties, although the idea was floated as a lower-cost option.
Supervisor Chris Coursey said Tuesday he was ready to postpone a wider decision, again. "We're talking about one time money over the next year. I'm going to support that and support looking at providing these services in other ways."
Susan Gorin told colleagues that while the topline issue is money, there are broader concerns. "This issue has arisen for financial reasons, certainly. Can we afford to keep a helicopter running and employ the great pilots that operate it, and also, oops, we have a couple of media challenges, with you sheriff, about landing at a Super Bowl game, however you want to categorize it, we need to really be serious about exactly why we have a helicopter, what it's use is, legitimately."
While no decision was made, it was clear the board was ready to reauthorize for another year.  "Every time it has come up I have voted for it, and I will vote for it again, every time, until we find an option that is better than what we have on the ground," said Supervisor David Rabbitt.