"Safe parking" sites for homeless roll out amid hope and trepidation 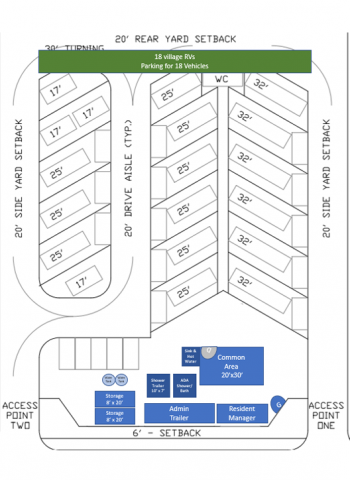 Conceptual layout of Sebastopol's safe parking site
photo credit: Credit: Sonoma Applied Village Services
The first of fifty families living out of their cars and RVs rolled into a Santa Rosa parking lot this month. That's as an experimental 'safe parking' program, long pushed by advocates, finally launched in Santa Rosa.
Meanwhile, public pressure forced city leaders to torpedo a similar program in the Central Coast city of Morro Bay. Viewed by some as a partial, temporary salve for some aspects of homelessness---a way to get people off the street and provide some level of safety---the designated spots also make delivering services, from food to counseling, more efficient.
In Sebastopol, a similar 'safe lot,' envisioned as place to relocate dozens of people living out of vehicles next to the trendy shops and eateries of The Barlow Market, recently received some new tenants. There are still reservations and a bit worry about how it will all shake out.
There was something of an uneasy peace along Morris Street. Many of those living out of vehicles said they were trying their best to be discreet and respectful. Mike Wood, a former steel fabricator and fisherman sidelined by injury, said to ordinary passers-by, that might not have been evident.  "If I was a kind of a normal, a 'normie,' whatever you want to call it, I might be a little intimidated by this area, regardless of what the nature of the people really are. I mean if it's not something you've seen, it looks like a bunch of Gypsies or something, you know? It might bug me too if I was a long term homeowner or something here. I don't know how I'd feel about it. I've been on the streets before, so I get it."
The Sebastopol lot comes with a number of rules and backers say they can safely manage it without impacting neighbors---something not universally believed. Meanwhile, the city also moved to prohibit daytime parking of RVs. Among neighbors of the lot, support is far from universal. Brett Palm, who has lived adjacent to the site for 14 years, filed a lawsuit to block the parking lot. He said officials raced through approvals without conducting outreach. "This was just shoved down my throat. Here we are, take it or leave it, and I don't appreciate that."
Nevertheless, he said, his mind is open. "Maybe this is a good solution, I don't know. I would just have liked to have been able to be in on the discussion, how do these things work? Show me some studies. Where's the traffic report? Is this a good thing? Is this a waste of money? Is this one year, two years? I haven't been included in the conversation or educated about it. I might come around and say, 'this is a fabulous idea' I just don't know."
John Henry Hull, who lived on Morris Street for six months before relocating to the lot, says it will be interesting to watch what happens. "Everybody is kind of skeptical about it because there are some rules, but I think anything that would be a service like 'SAVS' has been, any shelter or anything like that is going to have some set of rules and it's been interesting to see what they've come up with and it will be interesting to see how it works with the people because a lot of people that are out here are kind of against authority and shy away from rules and all this stuff."
Hull and others contend random dumping by outsiders is unfairly blamed on the vehicular homeless. Others say transient tent dwellers along the nearby Laguna de Santa Rosa add to problems.
Local homeowner Scott Ames says visible disorder hardens hearts and generates opposition. "When they took this over, and no one said anything, the sidewalk couldn't be used anymore, the bike path couldn't be used anymore, you look at the trash, we give a Dumpster over there for people to use, there's trash everywhere, that's why people don't want this, in their neighborhood."
Ames however, acknowledged that multiple issues are at play, and there's no easy solution. "I'm appalled. Again, I understand that they need a place but whenever they, excuse me, I don't want to say 'they,' I don't want to group them all together. They are individual people with different needs and wants, I understand that, but we all have a responsibility in society to keep it clean for others, for ourselves, take a picture down that sidewalk, I've seen human feces down here, try to talk with some people, have a conversation, it doesn't go over well at all. It's a conundrum that I think we all know exists throughout our country, especially with the prices here in California, and I don't have a quick fix, but individuals have to be responsible for their own place in a society."
Mike Wood, the former steel fabricator has yet to apply for a spot in the new community, he faces a conundrum of his own: whether he'd be taking a slot that should go to someone perhaps more deserving. "I'm not sure if I am going to go up there, because, if I'm capable of getting my stuff somewhere else, then I don't want to take a spot up there that could go to somebody who has kids or needs it more than I do, but it wouldn't suck to have a minute to gather and then take that step."
Additional reporting by Adam Grossberg and Chelsea Wood.
A more in depth look at the Morris Street vehicular homeless and the new safe parking site will be included in the April episode of Bay Area Bountiful on KRCB-TV.