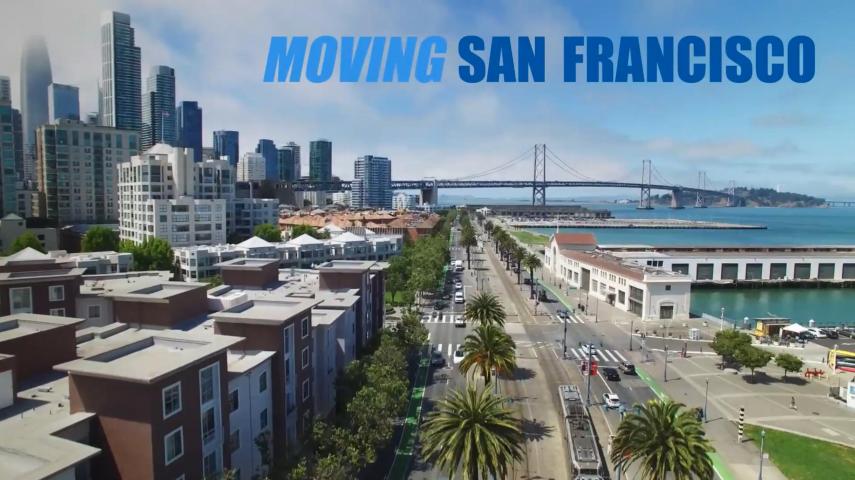 San Francisco is known for its cable cars, ferries and bridges. The history of transit in the 'City by the Bay' tells a story of innovation and perseverance, and the city grew hand in hand with its ever-changing transit system. "Moving San Francisco" is a new documentary from filmmakers Jim Yager and Peter Stein.

Yager said, "One of the things that Peter and I learned in making the documentary was that it really was the topography that led how we went about moving people from place to place. In other words,” he said, “transit was what allowed the city to grow. Sometimes, you think, well, transit goes to where the people are. Well, in this case, the city was designed around once the transit lines went in, that's where the city was able to grow,” he said.

One of the most innovative transit features of the city came about from the necessity of having to merge two different street grids that were offset to each other. The answer: Market Street.

"Anybody who's driven down Market Street and tried to make a left or a right turn can tell you how challenging that can be,” Yager explained. “But the way they stitched the two grids together with Market Street not only created the main boulevard for the city, but provided a transit avenue it's at a grade that not only is perfect for electric street cars, but it also the perfect grade for riding a bicycle," he said.

Market Street has been closed to cars since January of 2020, which, while offering more pedestrian access, presents a new challenge.

"Today,” Yager said, “the challenge is  trying to now recreate it as a corridor for transit, bicyclists and pedestrians, as really a way of reinventing the city's core. Which has been somewhat controversial, but at the same time is very exciting,” he said.

San Francisco is no stranger to controversy. In the 1950s, as the nation was vastly expanding its network of freeways, the documentary shows how the people of San Francisco were able to halt construction of a few of them during the so-called "freeway wars."

Yager explained, "In the mid-20th century, cities built freeways as a means of getting people around. And often times, those freeways cut through neighborhoods and divided neighborhoods - as it has in Oakland and what it had threatened to do in San Francisco when the freeway wars were going on in the 1950s and 60s. And it was left up to communities to really fight that. And in many ways,” he continues, “San Francisco was saved by those people that prevented the freeways from going in back then. And Oakland is still struggling with that today and finding ways to bring people back together and neighborhoods back together," Yager said.

With some 42 hills contained within the 47 square miles that is San Francisco, having innovative means of transit has always been a part of the city's DNA.

"The cable cars, what Andrew Hallidie invented back in the 1860s, was unique in the world at the time and many other cities kind of copied it,” Yager said. “And for the time cable cars were electric street cars came in in the early 1900s, it was quite an innovation for helping cities with steep topography, like San Francisco, with helping people get around. Since then,” he continues, “we were the leader in the nation in developing a municipal transit system that was owned by the people of the city. I didn't really know this before either, but back in the day in the early 1900s, most of the transit systems across the country were privately owned. And San Francisco was the first city to actually make It a municipal utility," Yager said.

"Moving San Francisco" presents a lot of transit history and turmoil, but it also speaks to issues and struggles any city, large or small, must deal with today.

"One of the things that we struggled with in the documentary,” Yager explained, “was keeping it timely and, as you know, so much has changed in just the last two years. And transit is sort of in a state of struggle right now. And I think the takeaway from the film is to remind people of the importance of not only being able to get into our cars and go where we want to go, but the value of public transit to us as a community. And I do think that at this time, where we're all thinking about how can we come together again as a community, transit is one of those things that we should really think about, making sure we invest in, as a city and as a state," Yager said.

"Moving San Francisco" airs Tuesday, March 15th at 9:00 PM, and again Friday, March 18th at noon and Saturday, March 19th at 11:00 AM on KRCB TV. You can also watch it anytime with your PBS Passport subscription.