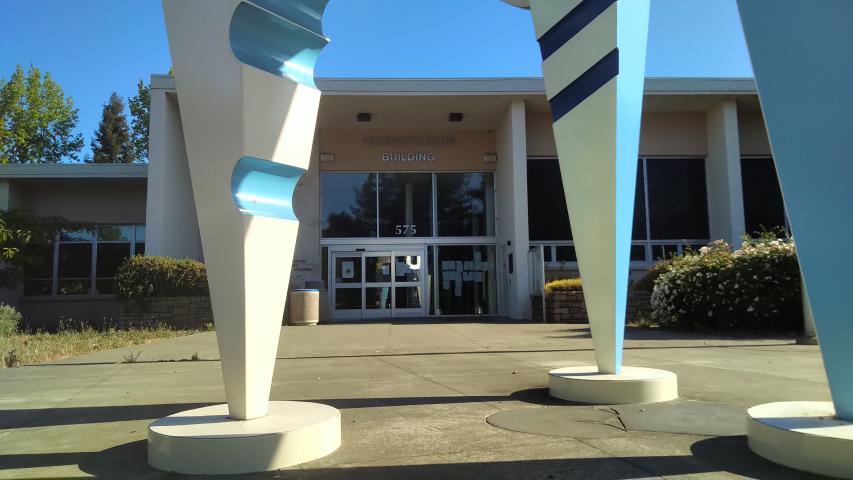 Sonoma County Administration building
photo credit: (Credit: Marc Albert/KRCB)
Sonoma County supervisors violated the state's open meeting laws twice last year as they worked to redraw political boundaries. That's according to a determination by Sonoma County District Attorney Jill Ravitch.
The findings are unlikely to force any changes to recently-approved district maps, as the violations of California's Brown Act were deemed not to have impacted the final results.
The board was accused of five different violations. Two were cast out and one remains under investigation. In a letter to Santa Rosa activist Sonia Taylor, who alerted Ravitch of the board's alleged misconduct, Ravitch wrote the board of supervisors could address the remaining issues by making two documents public.
One summarizes lawsuit threats from county residents over the process, used as a pretext for the board meeting in closed session. Ravitch wrote that because no decision was taken at that meeting in question, no further action is required.
The second involves comments on draft maps from individual supervisors, sent to county staff and then shared with the whole board, but not the public. Sharing documents among a majority of members outside of a public meeting is considered a serious violation. But again, Ravitch determined that no action was taken secretly, and that the public had subsequent opportunities to quote 'weigh in on the subject.'
Ravitch, in her letter, wrote the board could cure both issues by posting the documents to the county's redistricting website. An email to Ravitch spokesman Brandon Gilbert was referred to Chief Deputy District Attorney Brian Staebell, who declined an interview request.