Guerneville turns out to support Ukraine 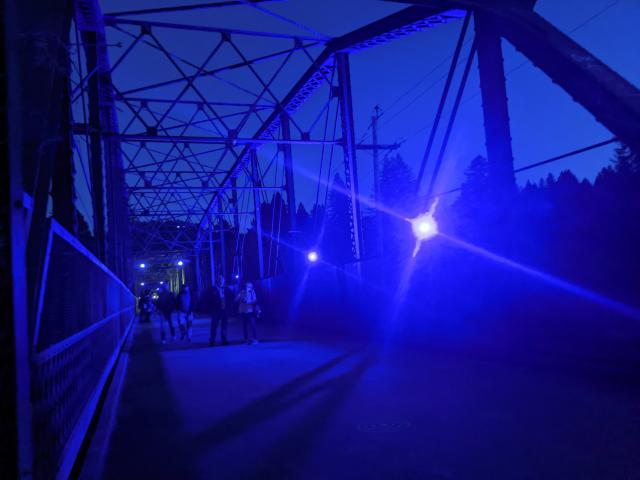 The old Guerneville bridge takes on a Ukrainian hue in solidarity.
photo credit: (Credit: Marc Albert/KRCB)
Locals from Guerneville and elsewhere gathered Friday evening to show support and solidarity with Ukraine, as the Russian invasion of the east European nation enters its third week. About 100 people turned out around sunset, some wearing yellow and blue stickers, the colors of the Ukrainian flag.
A handful of people briefly spoke, including Supervisor Lynda Hopkins, who suggested the assembled donate cash to help. Some of those gathered urged stronger action against Russia, regardless of the potential consequences. Several praised President Biden's actions against his Russian counterpart, Vladimir Putin, saying he's standing up to a bully and skillfully avoiding escalating a potentially apocalyptic conflict. A handful shared their thoughts with KRCB's Marc Albert.
The voices there of Barbara Link, Sunny Santos, Alona Shkurkin, John Lovell, Berlin Fischer, and Eric Jorgensen.