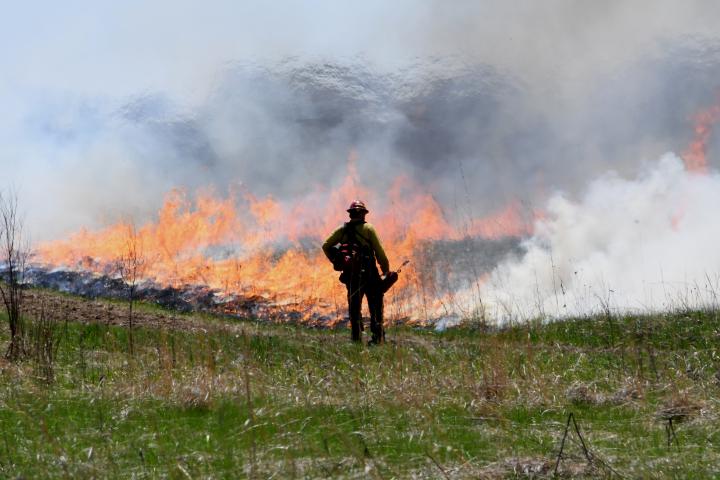 photo credit: Wikimedia Commons
On a recent cold morning in the steep hills outside Healdsburg, a team of volunteers with Audubon Canyon Ranch’s Fire Forward program managed a controlled burn.
The program is designed, in the words of its founders, to bring a unique blend of science-based program design and community organizing to fire prevention and management. Fire Forward volunteers receive training for certification on a hand crew officially known as a Type 2 Wildland Firefighter. That allows them to participate in controlled burns, also known as prescriptive fire.
"It's just kind of fun to see how enthusiastic the groups are." Volunteer Chris Arai said. "I get this mailing list and go to sign up on the spread, but by the time I get to it, I'm like way down in the waiting list."
Once used as a land stewardship practice by indigenous tribes across the state, prescriptive fire was aggressively legislated against in California starting around 100 years ago. State policy is returning to the practice, with two bills signed into law last year by Governor Gavin Newsom promoting the use of prescribed fire. One of those laws allows private groups more liability protection to use controlled burns for public benefit. The other calls for the establishment of a controlled burn training center and a cultural burning liaison.
Thea Maria Carlson is a land steward in eastern Sonoma County. A part of the controlled burn outside Healdsburg, she said 2020’s Glass Fire showed her the importance of controlled burning as a form of fire prevention. She spoke about her fellow land steward's effort to conduct a controlled burn.
"[They] brought Fire Forward up to do a prescribed burn on our land in 2019." Carlson said. "And then in 2020, our land burned in the Glass Fire and the area that we'd done the prescribed burn on didn't burn at all. And that's what really got me into it."
Arai, whose property lies above Alexander Valley, said the Kincade Fire was his major motivation to get involved with Fire Forward.
"My property was burned completely in the Kincade Fire." Arai said.
For property owners in fire prone areas like Arai, Fire Forward’s companion organization, the Good Fire Alliance or GFA, helps connect them with organizations, volunteers, and resources to engage in good land stewardship practices.  Covering Sonoma and Marin counties, the GFA is one of over a dozen active such associations in California.
Carlson said prescribed fire is not only about protecting people and property.

"Mitigating wildfire danger is an important part, but it's also stewarding the ecosystems here." Carlson said. "They co-evolved with fire and they really need fire to thrive. As I've learned how important fire is to the health of ecosystems, I appreciate doing that as stewardship and also protecting communities at the same time."