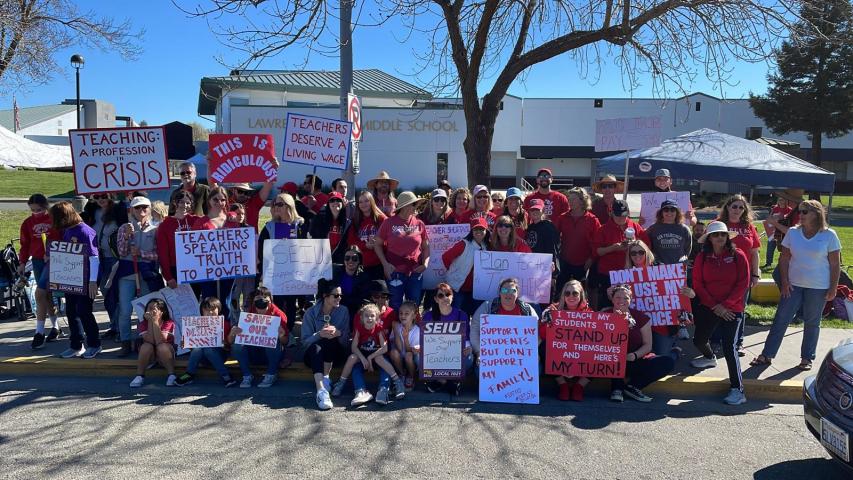 Teachers and staff striking Thursday in Rohnert Park.
photo credit: Courtesy RPCEA/Denise Tranfaglia
Teachers and employees of the Cotati-Rohnert Park Unified School District went on strike Thursday, primarily over wages. That’s after months of negotiations hit a standstill.
Over 90 percent of Rohnert Park Cotati Educators Association, or RPCEA, members voted Monday to authorize a strike if the union’s demands were not met.
"So ultimately we're out here for the students because attracting and retaining quality educators are really about doing what's best for the student," said RPCEA Vice President Lisa Bauman outside Rohnert Park's Rancho Cotate High School on Thursday morning. "And unless we can raise salaries, we're going to lose all of our young and new talented educators."
Bauman spoke over the repeated honks and cheers from passing drivers.
A neutral, state-appointed fact-finding mediator was called in after negotiations broke down towards the end of last year, and the fact-finding report recommends a pay raise of almost 15 percent spread across the next three years. The report also found that teachers in the school district make 20 percent less than the state average.
The district does not dispute the findings, but says it's not an "apples to apples" comparison because other districts have more money.
During negotiations which began in June of 2021, RPCEA asked for a seven percent raise for the 2021-22 school year, then six percent for both the 2022-23 and 2023-24 school years.
In January, the district countered with an offer of a three percent raise, with a bonus offer of $2,000. The district maintains that the union's wage demands would drain its coffers to the tune of a $2.9 million deficit by 2023-24.
In fact-finding, RPCEA pointed to the district’s expenditures, saying they deviate from similar school districts. Like administrator salaries, which are slightly above the statewide average, and teacher salaries which are below the state average as a percentage of outgoing costs.
Liam Keaney, a junior at Rancho Cotate High School, led Thursday’s picketers in chants. He said the student body stands with the teachers.
"We all support the teachers, we all know how hard they work, and how much time they put in and that they deserve better," Keaney said.
Matt Mueller is a Spanish teacher at Rancho Cotate, and he said that without the pay raise RPCEA is demanding, he may have to leave the district.
"With cost of living going up and our salaries not going up to meet it, I'll have to take a good, hard look at going somewhere else," Mueller said,
The school district outlined its reasons for rejecting the union's demands on its webpage, saying that the raises RPCEA is asking for would hamper the district’s quote “ability to provide salary increases for other labor groups," and put the district at risk of being taken over by the state.
For teachers like Anna Leemon, a Stanford grad who teaches chemistry at Rancho Cotate, the pay raise is a matter of survival.
"You know, I can't afford my rent at the end of my expenses, and my list of expenses is very short," Leemon said. "I have $440 left at the end of my paycheck, and that's only for 11 months out of the year. Teachers don't get paid 12 months out of the year."
According to the district, as of Thursday, all schools in the system are open except for Monte Vista Elementary, which is closed due to lack of staffing.
Schools that are still open are largely operating on "minimum days," with the exception of Technology High School, which is on a full-day schedule.