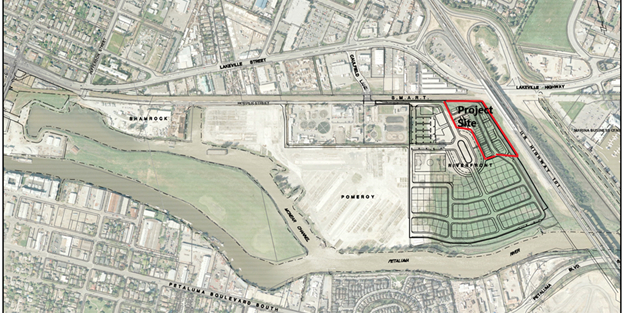 Location of the "Riverscape" project
photo credit: City of Petaluma
Officials advanced a final option outlining new council districts in Petaluma Monday evening, and took a crucial step, approving parts of a major mixed-use development.
Throughout the process, it was no-one on the council's first choice, but after lengthy debate, Petaluma officials chose what they called 'option 2,' carving the city into council districts to avoid potential litigation.
Though there were reservations, draft map 2 came closest to meeting shared goals--using US-101 as a boundary and consolidating 'mid-town' Petaluma in a single district. Councilwoman D'Lynda Fischer said it was a compromise. "I don't really like the fact that the little piece of downtown then is with district D and the rest of it, that doesn't make a whole lot of sense to me, but I do like the way it divides the city," she said.
Councilman Dave King said the time for a decision had arrived. "We have had, I think this is our fifth, not counting the preliminary meetings that we discussed the idea of going to districts and we're under a deadline, so, I kind of want to leave it to getting it done," he said.
The issue will return for a final vote.
The council also agreed to subdivide 36-acres on the north bank of the Petaluma River at 101, planned for 50 homes and townhouse, part of a larger redevelopment. Though traffic remains a concern, council members praised plans calling for solar arrays with battery storage for each unit, making the project electrically self-sufficient, at least in theory. A handful of smaller units were added, along with optional granny flats for some buyers.
Councilman Kevin McDonnell praised the developer's cooperation with the planning commission, which altered earlier plans. "People often ask, well, what does it take to get a good developer to come to town, one that listens to the impact, while this isn't perfect, there's a lot of concern about the overall master plan of this area, this developer did a number of good things and should be recognized for that. They added the live-work area, added to making it a walkable, activated community so, good on them."