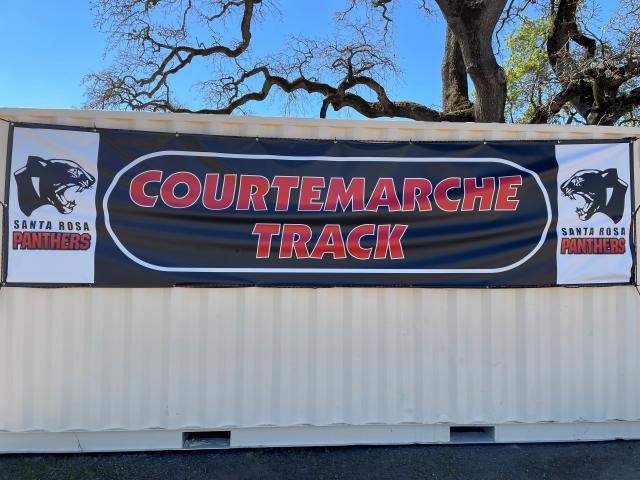 photo credit:
For nearly three decades, track and field athletes at Santa Rosa High were greeted by the familiar face of Coach Doug Courtemarche. He coached track and field for 27 years, from 1992 to 2019. Following his retirement, current head coach Carrie Joseph who served as an assistant and co-coach to Courtemarche for 23 years herself, sent a proposal to the district's school board to dedicate Santa Rosa High Schools’ track in honor of Courtemarche. Courtemarche said the announcement caught him off guard.
"That just came outta nowhere." Courtemarche explained, "and I, I was completely stunned and there's a girl next to me. One of the seniors and I just turned to Caroline and I said, Caroline, aren't you supposed to be dead for this kind of stuff?"

The dedication ceremony is the culmination of a three-year effort, with the pandemic delaying the original proposal in 2019. The ceremony took place Saturday at this year’s Big Cat Invitational, a track meet Coach Courtemarche started in 1994. He said the Big Cat is an important meet for many high school track and field athletes in the Redwood Empire.
"For a lot of kids, their first high school track meet was Big Cat. It's a unique meet in that it's like an all comers meet because there's so many kids that have never been in a high school track meet before." Courtemarche said. "And I wanted it to be an educational thing for the kids where they get introduced to a track meet in a, in a very helpful and positive way."

For Courtemarche, a competitive spirit drove a desire for success for his teams. That translated to 25 and 26 winning seasons for Santa Rosa High’s Boys and Girls track teams respectively. But he said the most important thing was always making sure his athletes enjoyed their time on the track.
"And another thing I always wanted to do is to make sure that the kids went home happy after practice, that they felt that they had accomplished something." Courtemarche said, "and that it was a worthwhile endeavor and they wanted to come back."