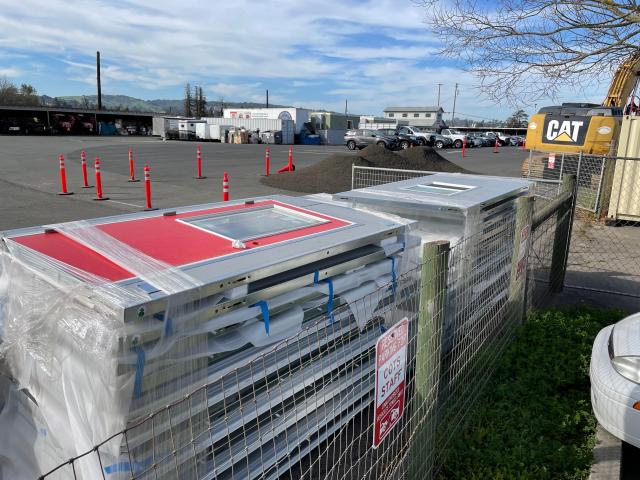 'People's Village' is just the start.
photo credit: City of Petaluma
Five dozen people surviving at encampments in Petaluma, will be re-housed and receive support, thanks to an infusion of state cash announced by Governor Gavin Newsom. Tents and shanties will be removed and impromptu campsites cleared.
Newsom, who spent part of Thursday heaving scrap metal and bicycle tires from an encampment in Redwood City, said his administration is taking action now, not waiting around for federal grants. He says earlier efforts have failed, forcing new strategies. "I can guarantee, if you continue doing what you've done, you get what you got, and that's is the status quo, ante-ism in all of this, in that if you don't create, as we say in psychology a 'pattern interrupt,' and this is a pattern interrupt for every single one of them, then, you're not going to enlighten someone to the opportunity to turn their lives around, quite literally they are going to die. You saw it just today. The death of someone, in a fire, under 280. There's no compassion in any of this, there's nothing just about people living in conditions like this. This is an abomination. This is unacceptable."
Petaluma will receive $1.3 million, which Assistant Petaluma City Manager Brian Cochran says will focus on both restoring land and lives. "We'll be using some of the funding to support additional housing options within the city, such as our people's village, which is the soon to be opened 25 tiny home units. We'll also be using the funding to provide housing locator and navigator services to identify affordable housing options, develop relationships with landlords and rental properties and advocate for those residents to get in to those housing options."
San Rafael and Marin County were also among the 19 jurisdictions awarded similar grants. In all, North Bay governments will receive more than $2.1 million to rehome 112 people and restore places where encampments get dismantled.
Since September, according to Newsom, 431 homeless encampments have been cleared. Just two dozen were removed the prior year due to the pandemic.