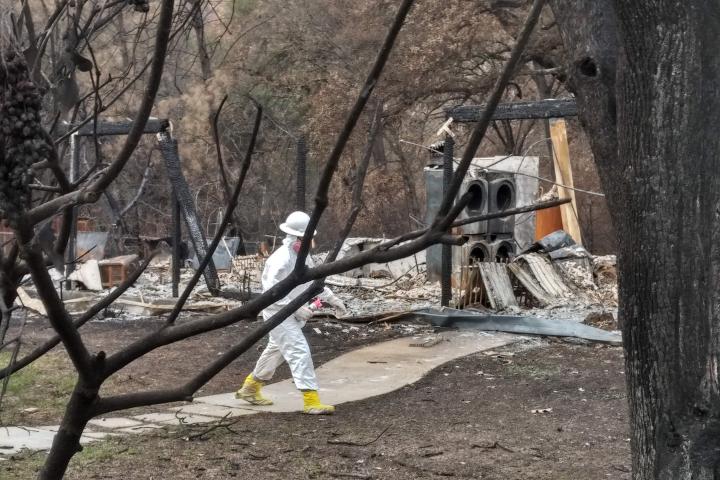 State-contracted crews assess and remove toxic material after a massive wildfire.
photo credit: Marc Albert/KRCB
Long awaited repairs to a half dozen local parks and streets damaged four and a half years ag o when flames raced from Calistoga to U.S. 101 and beyond, will soon be getting underway.
That's the short version of a detailed narrative laid out to the city council this week by Assistant City Manager Jason Nutt. Much of the park work involves replacing irrigation systems---which should help green up parks.
Before road repairs proceed, Nutt says officials will take the community's pulse on the possibilities. "If they are concerned about evacuation routes and they don't want a median, but they want to see reduced speeds, maybe we put bulb-outs on the corners," he said.
Santa Rosa has only been partly successful fighting federal and state agencies and utility Pacific Gas & Electric for disaster aid and reimbursement---getting just under $18 million out of $69 million invoiced.
Nutt said that the city will conduct public outreach to help finalize road design.
"We're looking for community members to give us both sides of the equation. What would they like to see, and what are their concerns? If we're going to put a median, is that a concern for evacuations, is that something they want us to consider? and so we'll definitely have open ears and really be looking for whatever kind of feedback we can gain."
Initially, damage to Santa Rosa left by the Tubbs Fire was estimated as $111 million.