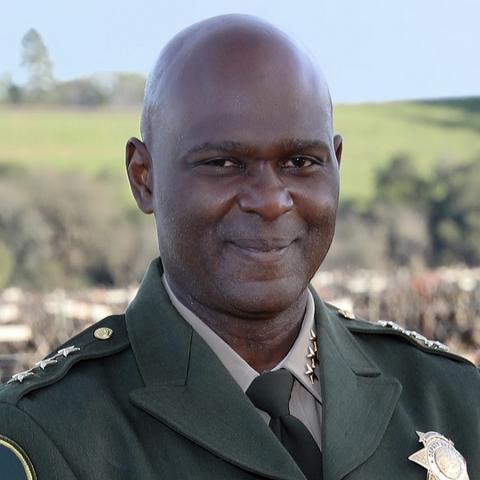 In late January, three of the four candidates running for Sonoma County sheriff participated in a virtual forum organized by the South Park Coalition Neighborhood group. Dave Edmonds, Carl Tennenbaum and Kevin Burke each had thirty minutes to address the assembled community members. One candidate, however, was missing from the virtual dais. Current Assistant Sherriff Eddie Engram.

His thirty minutes came Tuesday night. He pitched his case for becoming sheriff to a modest crowd of residents assembled for the virtual event.

In his initial remarks, Engram says he is no stranger to service and to overcoming adversity and hardship.

"I really come from a family of service,” he said. “My father was an addict. However, from those dark times, come better things. He recovered from homelessness and addiction and went on to work in a career for county government in Florida. And now he is retired, and he writes children's books. My mother, who worked two jobs to support me and my brother, she went on to get a Master of Nursing, and is now an adjunct professor at a community college. And she also works in community health care, specializing in communities that are facing disparities and inequities. Additionally, I also volunteer my time with Verity, helping those survivors from sexual and physical abuse. I am on the board of Verity as their treasurer. So, I really come from a family of service and have been involved with service my entire life. And I want to continue the service to people of Sonoma County," Engram said.

Engram's service with the Sonoma County Sheriff's Office began twenty years ago. He says he wants to be sheriff for a couple of reasons...

"Because I really want to improve on things we do well,” he began, “disaster management being one of those things. But I also see that there are things that we need to improve. So, my focus will be on public safety, improving our detention services, embracing constructive oversight, supporting community-based policing and engagement, and improve out hiring practice to have a more diverse working environment," he said.

Engram was asked how he would work to improve relations between the Sheriff's Office and Sonoma County's diverse population.

"We've actually been working on that and I've been pretty instrumental in doing that at the Sheriff's Office,” he explained. “We've created a community round table called CREED, Community Roundtable for Equity, Engagement, and Diversity. There are eighteen members of that group that represent large swaths of Sonoma County. So, members of the BIPOC community, members from the Sonoma Valley, northern parts of the county, the western parts of the county. So, it's really a group that works with the Sheriff's Office in bringing the community's concerns to us. Additionally, as sheriff, I would pledge to be in the community as well attending community meetings. Not just meetings that we are invited to, but meetings that we know of and attend," said Engram.

He went on to say historically, the department puts on events, or gets invited to events where those representing the Sherriff's Office are not the decision makers, "No lieutenants or Captains, or assistant sheriffs, or even the sheriff. As Sheriff,” he affirmed, “I would make sure that the people who attend these meetings are decision-makers or have the ability to filter the concerns of the people of Sonoma County up to me as Sheriff to where we can address those concerns and work better with the community," he said.

Racism was another topic. Engram was asked if he felt he had the necessary support within the department to address accusations of racism, not just from the community, but from within the rank and file.

"Yes I do,” he said confidently. “I have the support of the members of the Deputy Sheriffs Association, as well as Sonoma County Law Enforcement [Association], which are the union within the jail. So, I have wide support within the agency. Most of the people that work within our organization are good people. And they don't put up with racism, or divisive attitudes either. A lot of people within the office would like to make change. I do believe I would have the support in the organization to make those changes and ensure that we are not a divisive or racist organization," Engram said.

When confronted with concerns about recent high-priced payouts for wrongful death and excessive force lawsuits, Engram said he and everyone in his office should have a concern when it comes to the appearance of excessive force.

"That is something I am really concerned with,” he said. “We have implemented de-escalation training.  we have a new de-escalation training program that will be up in the next couple months. We train quarterly on de-escalation, and I really think that that's the thing that is necessary to reduce those claims of excessive force and the payouts that come from the county," he said.

When asked about how he would work with IOLERO, Sonoma County's Independent Office of Law Enforcement Review and Outreach, Engram says he believes it should be more like a partnership than adversarial.

"IOLERO and the Sheriff’s Office and the community as a whole have the same goal, he explained. “It's for the Sheriff's Office to be responsive to the community, to ensure that we are doing our job in a equitable manner, when we are dealing with members of the community. And another part of IOLERO's job is looking at our policies and seeing if there's a way that we can do our job better. And I think that it's very important to have outside eyes to see if there are thigs that we can do better."

While he may not agree with IOLERO's recommendations, Engram believes it's still a conversation worth having.

When asked what he would like to see for the Sonoma County Sheriff's Office in the next ten years, Engram says he really wants to see more diversity within the entire department.