"The biggest change to our trash" since 1980s recycling started 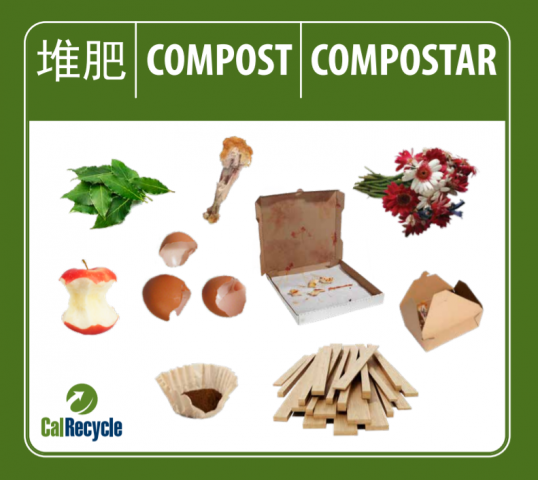 photo credit: CalRecycle
If you live in Sonoma County, chances are you already use a food waste bin. And if you don’t, a California law new in ‘2022 compels everyone in the state to sort their food waste from regular trash.

It’s called the Short-Lived Climate Pollutant Reduction Strategy. Passed in 2016 and effective as of January 1st, it’s a multi-pronged approach to cutting the amount of methane the state as a whole puts into the atmosphere.
Senate Bill 1383, "Directed various state agencies to take action to decrease California's methane emissions, which is really incredibly important in our fight against climate change," said Rachel Machi-Wagoner, director of CalRecycle. "Methane is a climate super pollutant."
According to the state government, reducing what it calls short-lived climate super pollutants like organic waste will have the fastest impact on the climate crisis.
"We can have a major impact on climate change by just changing how we deal with our organic waste ever so slightly, and just changing the way we think about waste overall," Machi-Wagoner said.
A key part of the state approach is insisting that every household stop putting food waste in the garbage.
It's gonna be a change in the kitchen, that's where it starts" said Celia Furber with Recology Sonoma Marin. "When you're making a meal and you're chopping up carrots or tomato, or you have an orange peel or banana peel, as well as coffee filters and paper towels, instead of putting those in your garbage in the kitchen, it means setting them aside in some way. So for many people that looks like having a designated kitchen pail or a designated bowl, and then taking that material out to the green cart instead of the garbage carts."
Recology Sonoma Marin is the company that comes around and picks up all residents and commercial bins in Sonoma County, except for Windsor and the city of Sonoma: they have contracts with other waste haulers. But it’s all the same for Sonoma County residents and businesses, food waste now goes into the green bin.
As the head of CalRecycle says, the new effort is a big deal in the hauling world.
"I want everybody to think back to the 1980s, if you were around, to what happened when we started recycling...this is truly the biggest change to our trash since we started recycling in the 1980s, and it's very similar," Machi-Wagoner said.
Zero Waste Sonoma’s Xinci Tan said most Sonoma county residents already compost in accordance with the new regulations, but businesses will be the ones most affected by the new rules, particularly new food recovery requirements.
All those packaged to-go food items at grocery stores?
"Say, for example, at the end of the week, they haven't sold yet, and it's still perfectly good, perfectly edible, but it's maybe getting a little old," Tan said. "So instead of that going to the garbage, or even going to the compost, that should be donated to the homeless shelter or places like the Salvation Army."