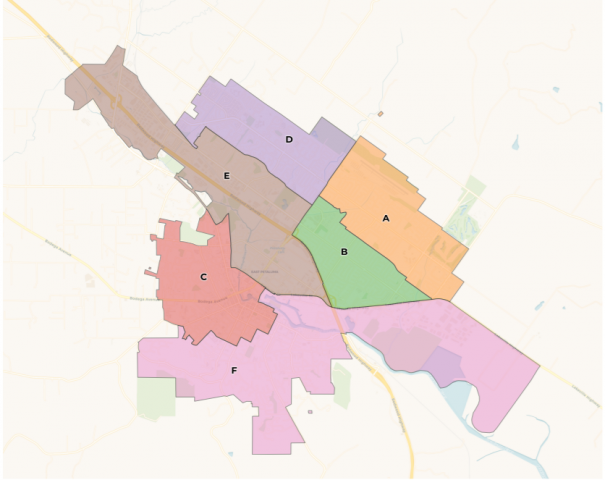 A draft district map reviewed at the city's Feb. 14 public hearing.
photo credit:
Major changes are on the way for local government in Petaluma. Following the threat of litigation, the city is switching to district-based city council election system.
Petaluma is currently developing a new political map made up of six districts, each with their own council seat. The new district-based system is a departure from the city’s current at-large elections and will be in place for the upcoming round of city council elections this November.
This week city officials focused on workshopping potential new district maps with their outside mapping consultant, Redistricting Partners. Redistrict Partner's Chris Chaffee said community input drove the district mapping process.
"The  draft maps started from the numerous community of interest forms and worksheets and emails that were submitted. In addition to the hand drawn maps," Chaffee said.
City Attorney Eric Danly said the new districts will need to be pretty much equal in size, among other criteria.
"They have to be contiguous" Danly said. "They should be connected. They should respect communities of interest. Their districts have to be easily identifiable and understandable and follow natural boundaries. They have to be reasonably compact."
Petaluma formally began the districting process in October 2021. That’s after Kevin Shenkman, a Malibu-based attorney, threatened to file suit against the city for violating the California Voting Rights Act. Shenkman has pushed numerous cities up and down California to change from at-large elections with the threat of litigation or lawsuits outright. Shenkman began his efforts with a lawsuit against the city of Palmdale in 2013. That forced Palmdale to adopt district-based city council elections, and Shenkman was awarded a $4.5 million settlement.
Those interested in submitting a draft map for consideration, can do so by February 23 via the city of Petaluma’s website.