Plenty of choices, even without a presidential election 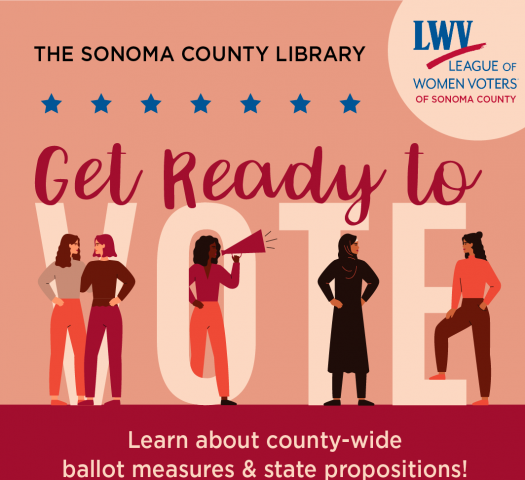 photo credit: Courtesy Sonoma County Library
There's no presidential election, yet some Sonoma County voters will cast as many as three ballots this year.
The first voting is just around the corner in Windsor. That's where, on April 12th, locals will choose from among three hopefuls vying to replace Sam Salmon on the town council. Salmon became mayor when alleged sex scandals drove Dominic Foppoli from office. Stephanie Ahmad, Evan Kubota and Michael Wall are the remaining candidates for the city-wide council seat. A fourth candidate, Jeffrey Leasure, withdrew from the race.
Ballots will be mailed March 14. New rules also change some of the mechanics of voting. Deva Proto, Sonoma County's clerk said there are several options voters can use to return ballots other than mailing them back. "They can also drop it at any of our ballot drop boxes, they can go drop it off at any of our vote center locations. Some of those will open 10 days before the election, some of them four days, our office will be open the full 29 days and then they can also vote in person at any of the locations."
On June 7th, voters county-wide choose candidates to fill four federal and a baker's dozen of state offices, along with judges and a half dozen county offices. Local seats include successors to District Attorney Jill Ravitch and Sheriff Mark Essick; neither are seeking re-election. Carla Rodriguez, a deputy district attorney is so far the only candidate running to replace Ravitch, while Eddie Engram, Dave Edmonds, Carl Tennenbaum and Kevin Burke compete for sheriff. The county clerk/recorder/assessor and auditor/controller/treasurer/tax collector will also be selected. Additionally, Supervisors David Rabbitt and James Gore are up for re-election. Rabbitt faces Petaluma Planning Commissioner Blake Hooper, while Gore is unopposed, at least for now.
While fundraising and endorsement battles are well underway, the official nomination period hasn't started. That means more candidates could emerge. "People are declared candidates, but they can't actually file to be on the ballot until Monday at the earliest." Proto said.
Races not decided in June will be settled, along with a laundry list of statewide propositions and initiatives, November 7th.