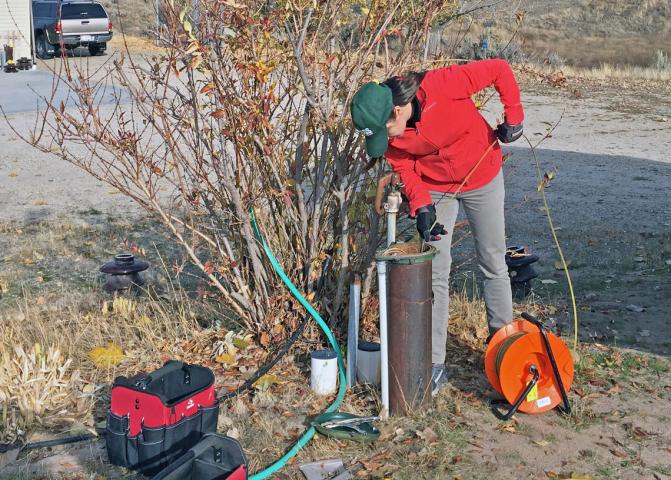 A USGS Hydrologist measures groundwater levels in a 'monitoring well.'
photo credit: United States Geological Survey
Petaluma officials braced for a flood of criticism Monday as city leaders inched closer to charging those drawing from wells for groundwater.
Groundwater supplies, at least as far as anyone knows, are in good shape, officials were told. That's the good news.
But the state law establishing… 'groundwater sustainability agencies' or GSAs….requires them to measure, track and monitor conditions. That’s a work-order locally estimated to cost one point one million dollars annually. Coming up with that kind of cash had officials pondering options.
Councilman Mike Healy, who also serves on the GSA's board, noted a significant omission.
"It probably didn't escape anyone's notice that there were no numbers associated with the presentation tonight. The reason for that is the rate consultants are in a little bit of a shock about how high the numbers could be for Petaluma Valley GSA."
Because more people rely on wells in the adjoining Santa Rosa Plain area, the pain is spread more widely.
SonomaWater's Ann Dubay estimated typical rural residents there would pay $10 a year, while one with a 10-acre vineyard might pay $100 a year.
Healy said there's a big difference in the Petaluma area. "We have many fewer wells, so the expense has to be spread over a much lower number of wells."
Healy added that locals may oppose new fees without glaring benefits. "It's really all additional wells and monitoring and filling in data gaps and report writing. Things like that.So that's a very difficult sell, I think, for the public, in terms of why you should be paying money for that kind of work, as opposed to something that is physically improving the aquifer."
Mayor Teresa Barrett questioned if the process had lost sight of its origin--not over-drawing from aquifers.
"I find it a little difficult to figure out how we are incentivizing pumpers not to use more water, because they're not metered, or many of them are not metered, I don't see where the incentive is to use less." A final decision isn't expected before May.