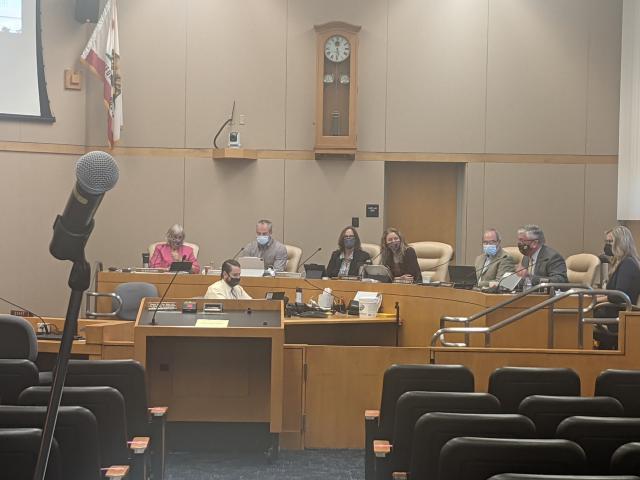 photo credit:
New boundaries for Sonoma County's supervisorial districts inched closer to reality Monday but perhaps not quite as planned.
Rather than small tweaks to a map developed by the county's Advisory Redistricting Committee or ARC, at Monday's special board workshop, the supervisors worked off an entirely new map. That's despite them unanimously saying at the Nov. 16 board meeting they supported ARC's map.
Some members of the public accused the board of looking to consolidate their bases of political support rather than achieve more equitable representation.
Then, the horse trading began. Scores of minor provisions were weighed, as officials attempted to tick off required criteria. But, a minor change to bring equilibrium to population numbers in one place, would throw off another calculation. A typical exchange between the county's consultant, and supervisors David Coursey and Susan Gorin.
"College (Avenue)is probably too many, but I can look at that...So that is 5,227 people. It would almost perfectly balance (district) 3, but (district) 1 would then be over by seven percent, so maybe we have to...
Coursey: "Maybe this map doesn't work"
Gorin: "Well, I think now we're understanding the challenges that our re-districting commission had, truly"
On the table is the issue of perhaps dividing Rohnert Park between two districts. And using Highway 101 or the railroad tracks as a division in Santa Rosa, along with assigning downtown Santa Rosa to a single district.
Supervisor Coursey said he'll oppose the map, and questioned whether the late developments in the process meet requirements for public participation.
"Actually, what I said was I would love to hear what the public thinks about this, but we're not hearing from the public about this map today."
The board must approve new maps December 15th. A near-final map is expected to be unveiled, discussed and possibly undergo final changes when the board meets December 7th.