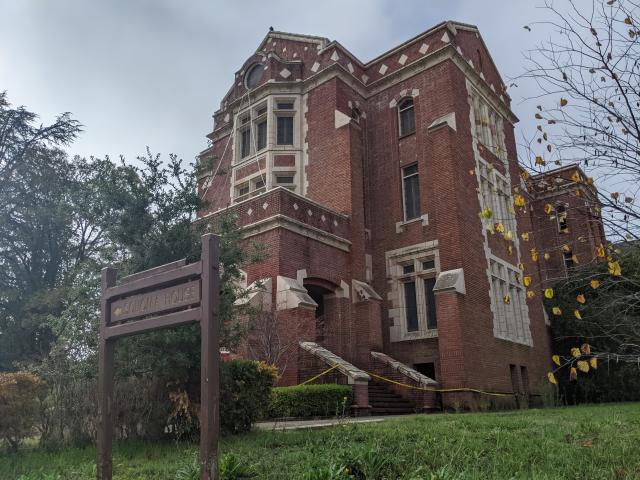 The original building is a National Historic Landmark, but isn't seismically retrofitted.
photo credit: (Credit: Marc Albert/KRCB)
Under clear skies, with rain-fueled emerald grass again pushing skyward, a two hour media tour of the abandoned Gothic facilities lacked any creepy foreboding.
Dozens of buildings, from utilitarian mid-century brutalist, to wooden Victorians to a stately, but unreinforced brick hospital dot the main campus, which still has it's own water and sewer infrastructure and once sported a dairy and fruit orchards.
Surplused by the state, Sonoma County has a lead role in planning the campus' next chapter.
After initial study, three alternatives have emerged, all variations on a theme. Housing, jobs and re-using existing buildings at different intensities.
Bradley Dunn, PermitSonoma's policy manager, said recent years have taken a toll.
"In closing the facility there's obviously (been) a dis-investment in the kind of repair and maintenance on facilities that aren't housing people. The money was spent on taking care of the people rather than taking care of buildings that weren't housing anyone."
Financial viability is one of the main drivers of the alternatives.
"We can potentially have more resources for things like retrofitting and a re-use of historic buildings, we can have more resources for affordable housing, for community benefits. That's a trade-off we will be looking at and we will be asking the public about. Which is more valuable? Having a hotel and having these other benefits---more preservation of the historic sites, more affordable housing or is it better to not have a hotel and not have as many of those things." 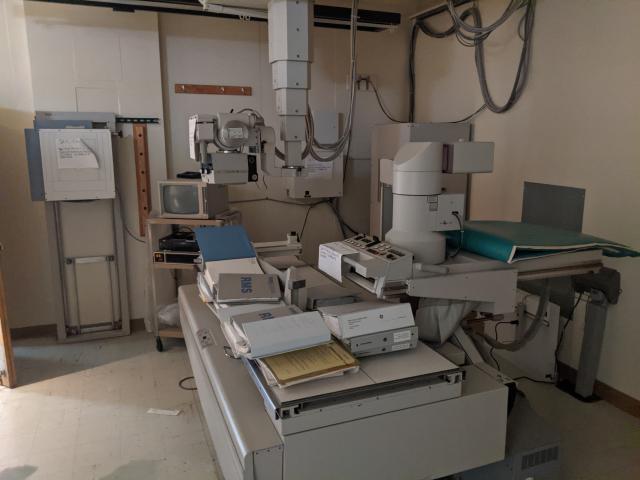 
"It's very clear from the alternatives proposed by the county that our current planning models and processes are just simply inadequate."

He says the plans and process treat nature as an afterthought.

"It's a very cookie-cutter, outdated and outmoded understanding of how natural systems work. Because, where the built environment is, is right at the pinch-point of a regionally important wildlife corridor"

That corridor, he said, on the north side of the property, adjoining a creek is critical for allowing wildlife, including apex predators, to transit from the Mayacamas mountains and Jack London State Park to reach Sonoma Mountain and even Point Reyes. Development in the wrong place would leave wildlife isolated, eventually crushing genetic diversity. 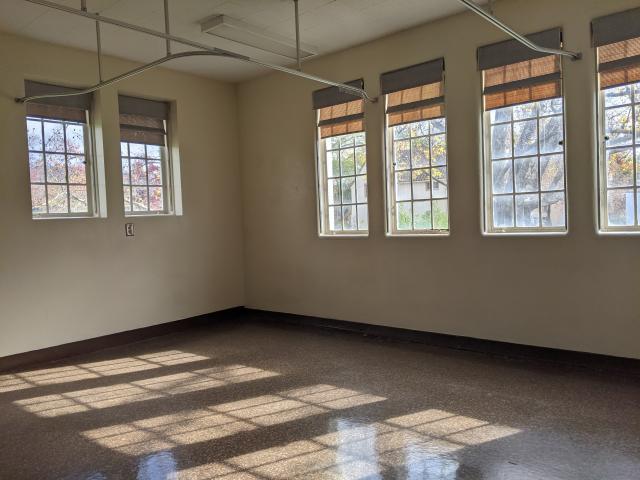 photo credit: (Credit: Marc Albert/KRCB)
Rather than creating a plan, then weighing it's environmental impact, O'Byrne said officials should delineate areas critical to the environment first, then figure out how best to develop what's left. He says the group is planning it's own independent environmental review, ahead of any official environmental impact report.


O'Byrne said the Sonoma Land Trust is nevertheless firmly behind affordable housing planned for the site.


"It is possible to have both a vibrant community there and a healthy, functioning wildlife corridor."


O'Byrne said for now, the element most concerning is a road proposed connecting Arnold Drive with Highway 12.


An hour and a half long online community meeting is scheduled to discuss the campus and alternatives Saturday morning beginning at 10 AM. Information about registering for the meeting is available on the project's website: sdc specific plan dot com.... under "register for community workshops." A survey is also available at the site.

A Spanish Language Town Hall meeting on the alternatives is scheduled for Tuesday at St. Leo’s Catholic Church in Sonoma, CA The meeting gets underway at 5:30.
A broader, on-line, meeting involving local advisory councils is scheduled for Wednesday, starting at 6:30pm. You can join the meeting by following the link below.
https://sonomacounty.zoom.us/j/96931443054?pwd=UFAxc2o1bHRTRW9waWxSR2NCdDZqZz09