Future of hydro-power, diversions from Eel to Russian River uncertain 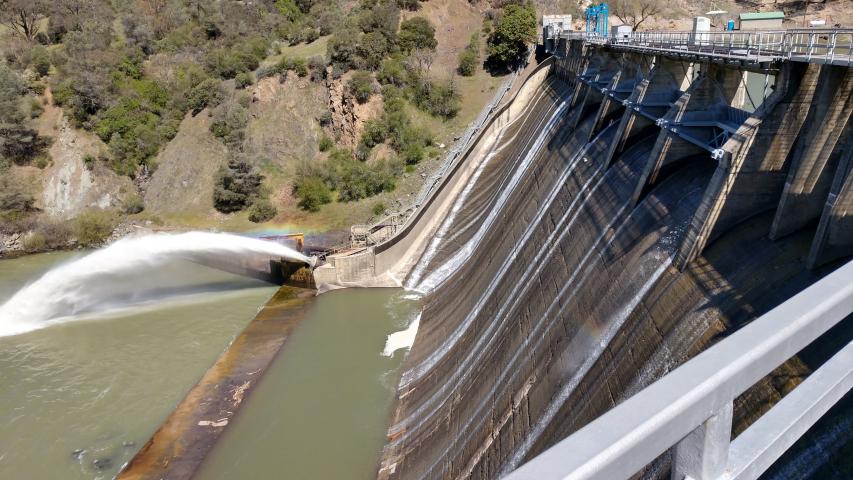 Scott Dam at Lake Pillsbury
photo credit: (Credit: Mendocino County Farm Bureau)
Far upstream of Lake Mendocino there's a century-old relic that's fueled farms and towns with water and power. Two dams, a tunnel and powerhouse are the main elements of The Potter Valley Project, infrastructure its owner, PGE&E wants to abandon.
Spokesman Paul Moreno said the company reached that conclusion as solar and wind energy prices dropped while estimates to maintain Porter Valley soared.
"For many of our small hydro-electric projects, they have become non-economic. Our larger ones are, but several of the smaller projects are not, and PG&E has been divesting itself from a few of those."
For the most part, Moreno says, those higher costs are from complying with whatever changes in operations and physical structures are ordered by federal regulators through license renewal. For example, adding fish ladders to the dam at Lake Pillsbury.
But what was once a byproduct---water being moved from one river to another---is now the main focus.
Everyone wants that water. A consortium of groups want to take over, shut the powerhouse and demolish the Lake Pillsbury dam. The dam's disappearance and better management would vastly improve conditions for salmon. But, it would also drain the lake, and the recreational businesses around it. Business owners and farmers receiving water from the project are wary of change and have vowed to fight.
Federal regulators have denied an extension requested by the consortium to raise $16 million for a study. The project's operating license expires April 14th. It's unclear if water diversions could continue if the powerhouse goes dark.
"If you're a holder of that license, well, of course, you're expected to operate a hydro-electric project." Moreno said it's not typical, but federal regulators have made exceptions. The final outcome is hard to predict.
"Ultimately, FERC will decide what the de-commissioning looks like, but in the meantime, PG&E will continue to operate the project beyond the April 2022 on our annual licenses."
Moreno says the company is still operating another facility it tried to close 15 years ago.