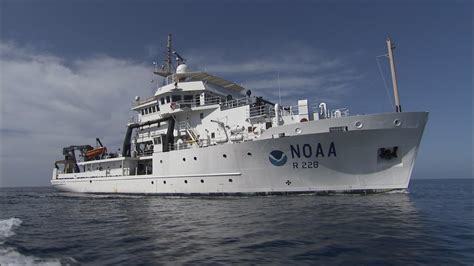 Research vessel "Reuben Lasker"
photo credit: NOAA
Federal marine scientists are halfway through what they are calling their most ambitious and comprehensive fish census off the west coast. Conditions in the Pacific are looking pretty good.
Since early June, the Reuben Lasker, a research ship operated by the National Oceanic and Atmospheric Administration, has been plying west coast waters. It's mission: detect and count the millions of small, schooling fish. Those species: sardines, anchovies, jack mackerel and pacific herring are in a sweet spot of the ocean's food web. They consume tiny krill, and in turn are eaten by bigger fish, and other predators. They're also harvested commercially.
David Demer is senior scientist at the southwest fisheries science center.
"From the standpoint of small pelagic fish, it appears as though a healthy eco-system, and I'm judging that statement primarily by the state of the anchovy population which is very large, over a million metric tons."
Seven years ago, anchovies were rare, but Pacific sardines were abundant. In 2015 and 2016, when sardines vanished impacts rippled up the food chain "and that had observable effects on the higher level predators--seabirds and California Sea Lions and other animals."
This year, six frequency echo sounder sonar is helping the ship hunt as a dolphin would. There's also A-I, "We augmented the survey effort with autonomous sailboats, they're called saildrones, and they're fitted with multi-frequency echo sounders, as well as instrumentation to sample the oceanographic conditions and the meteorological conditions."
The saildrones allow the ship to cover more space. Nets are also put out to improve confidence in findings, and this year, fishing vessels are collaborating with near shore counts.
"The fisheries managers are able to forecast through models...used in the policy formation to decide how much of these species can be harvested."
The ship, surveying an area from off Vancouver Island to Central Baja California, stopped in Bodega Bay in mid-August and is currently in San Diego. It's scheduled to set sail again on the 7th.