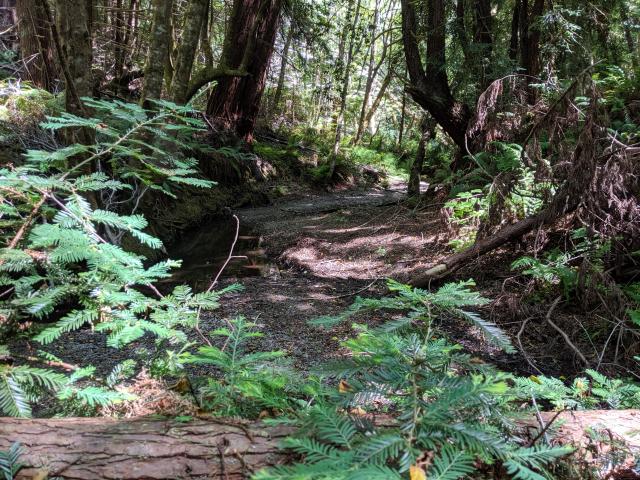 Willow Creek, one of the Russian River's last tributaries was already dry in July
photo credit: (Credit: Marc Albert/KRCB)
Long range weather forecasts don't see drought-busting storms on the horizon, and local water agencies are starting to brace for the worst.
If you've been following the drought intensify for two years, the words of Brad Puig, a meteorologist with the National Weather Service's Climate Prediction Service may haunt you.
"Beyond the end of November, we're favoring below-normal precipitation for the southern two-thirds of California."
That's due to a La-Nina pattern developing, signaling a weak rainy season ahead.
That lack of storms has sent local water agencies into crisis mode. Marin officials, meeting Monday, are set to discuss again laying a pipeline across the Richmond-San Rafael Bridge. That would open an option to buy water from beyond the region, according to Emma Detwiler with Marin Water. This time around the pipe could be permanent. They'll also discuss the possibility and practicality of a temporary or permanent desalination plant.
Here in Sonoma County, conservation remains the byword. Jay Jasperse, chief engineer and director of groundwater management, said it's doubtful Sonoma would follow suit. "We haven't had discussions about partnering with them on a desalination plant."
SonomaWater is taking other steps. Re-activating its three emergency groundwater wells, dug following the epic 1977 drought. "If all three of those wells are operational, they can provide about oh, five to seven percent of our total supply," Jasperse said. Normally, virtually all SonomaWater's water comes from the Russian River system. "Those wells alone, they will be a great help, but there has got to be other things that happen," he said.
Jasperse said the county's past pumping---employed in previous times of shortage---hasn't impacted neighboring wells.
Other changes are in the works. Jasperse said the agency is also studying how to inject excess floodwater into some of its three groundwater wells. Making it a two way street---recharging the aquifer when water is plentiful, and then using groundwater like a savings account.