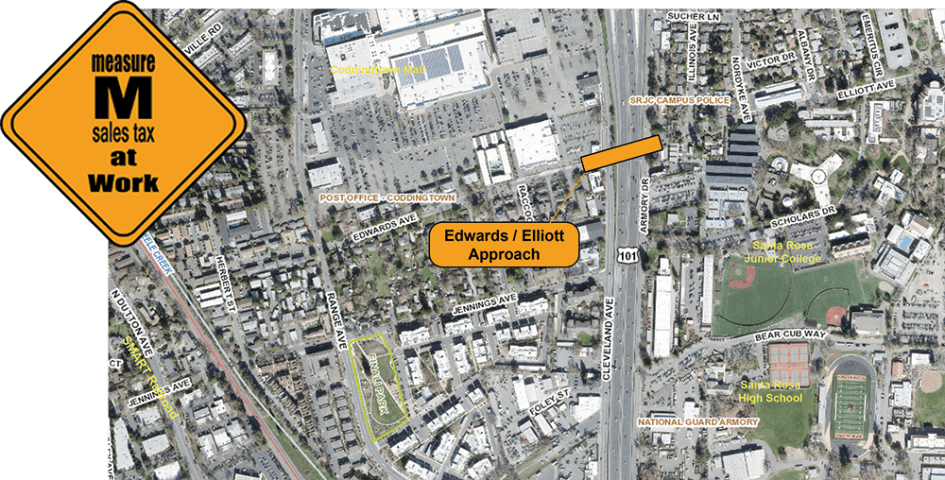 Proposed location south of Guerneville Rd.
photo credit: (Credit: City of Santa Rosa)
With a bit more than half the money assembled for a highway crossing talked about for two decades, Santa Rosa officials are confident they'll quickly find the rest.
If built, cyclists and those on foot wouldn't feel like they're playing chicken with drivers racing towards freeway on-ramps. Instead of dodging cars, those going from Santa Rosa Junior College to---for example---Coddingtown Shopping Center could dodge Guerneville Road entirely when crossing highway 101. They'd do that on a new, $21 million bridge for non-motorized travel, connecting Elliot Avenue and Edwards Avenue.
Assistant City Manager Jason Nutt said construction would start next year or in 2023. He believes officials will cobble together the rest of money through federal and state transportation grants.
The bridge would rise close to Jennings Avenue, a planned bike route chopped in two a few blocks to the west by fences around SMART rail's tracks. The city and rail operator are battling over that fencing. Nutt said Santa Rosa still hopes to restore a level crossing there, but even if SMART prevails legally, the bridge would be no white elephant.
"I don't expect that the access across the Jennings Avenue track is a critical component of the bridge over 101. We have a significant regional shopping center with affordable housing on the west side. We have substantial educational facilities on the east side. Regardless of whether that one particular access point is opened or closed, we expect that the bridge is going to be hugely successful."
Nutt said the bridge could open as soon as December of 2025.