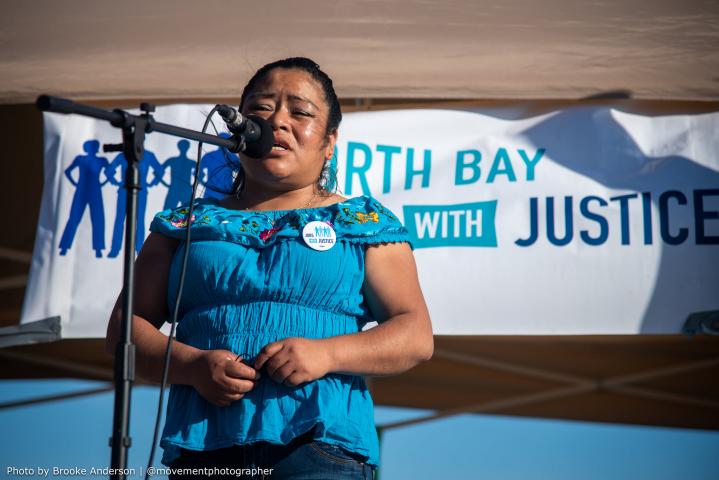 A local coalition called North Bay Jobs with Justice is leading the campaign for farmworker safety and respect during wildfires. And it started with  intensive interviews with farmworkers about their needs.

“As an organization, this work is worker driven, based on the experiences, lived realities and testimonies of farmworkers throughout Sonoma County,” said lead organizer Omar Paz. “We are hoping to start with raising awareness, and building power amongst these workers so that they feel connected to their own community, which they've been sacrificing their own bodies for to no benefit to them.”

“The bathrooms aren’t cleaned frequently, and they don’t want to provide gloves or masks,” Guzman said. “[Employers] say that if you want to protect yourself, you have to wear your own things.”

Guzman's first interview was with her brother-in-law Adrián, who works in Sonoma County vineyards. He underscored the inadequate bathrooms that sit in the hot sun during harvest, part of the petition's fifth demand.

“At the least, they could put up shade to offer protection from the intense heat inside,” he said.

Based on interviews and two years of experience working in the agriculture sector in Sonoma County, Guzman emphasized the need for translation of information to indigenous languages that many workers speak, like Mixteco, that her community speaks in Oaxaca, Mexico. This information is especially important during wildfire season to ensure workers understand evacuation routes and safety information in their native languages.

“More than anything, we are risking our health when we pick during wildfires and in smoke,” Guzman said. “I think if we all fight, things would be better and different.”

The campaign has exceeded a goal of one thousand signatures and Paz said the next step is talking to vineyard owners, managers and elected officials about implementing the demands around discrimination, fair pay and safety during wildfire season.

Guzman said there are farmworkers who remain fearful to speak about their experiences.

“I want them to know they are not alone,” Guzman said.