Drought so severe, even water 'royalty' could run dry within a month. 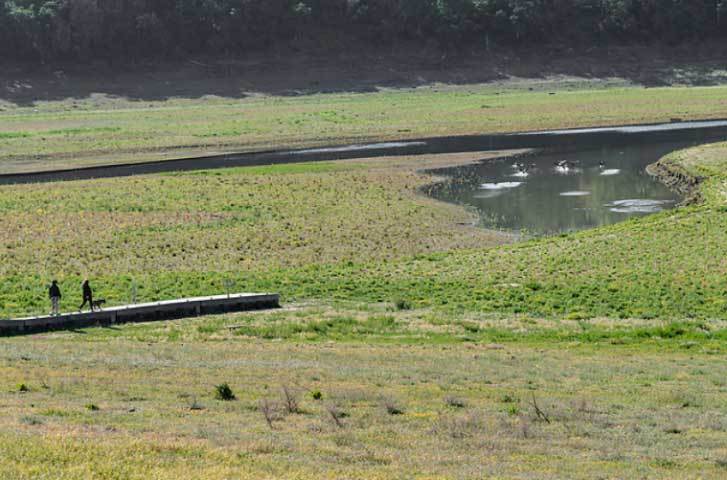 Lake Mendocino had already receded sharply by late April when this file photo was taken
photo credit: (Credit: Andrew Innerarity/California Department of Water Resources)
Holders of the most senior water rights in the upper Russian River drainage, typically spared during shortages, could soon face a new reality.
State water officials meeting Tuesday will get knee deep in a process that could force even those with the most senior rights---mostly farmers and municipalities with claims more than a century old---to stop pulling water from the river, or risk significant fines.
Without drastic action, Lake Mendocino could run dry before the end of the year.
Sam Boland-Brien, a program manager at the State Water Board, SAYS that would be devastating.
"The main stem of the Russian River could become no longer a river, just a series of disconnected pools"
What's being considered Tuesday would apply to areas upstream of Dry Creek. That's where releases from Lake Sonoma partly replenish the river. Downstream, conditions are less dire. At least for now.
An approval sends the issue to the state Office of Administrative Law, which could codify the decision early next month.
Boland-Brien SAYS plans under consideration would also grant temporary authority for enacting more restrictions, including to junior, senior and riparian water rights holders downstream of Dry Creek. It is unclear if that will happen. Reservoir levels would need to plunge further and other criteria met, before curtailment orders are extended further.
It is however possible.
"Lake Mendocino and Lake Sonoma are at the lowest levels ever recorded at this time of the year since they were constructed."
A heat wave expected next week is likely to increase demand for water, while hastening evaporation rates from the reservoirs.