Sonoma County Resiliency: One teacher gets through another abnormal school year 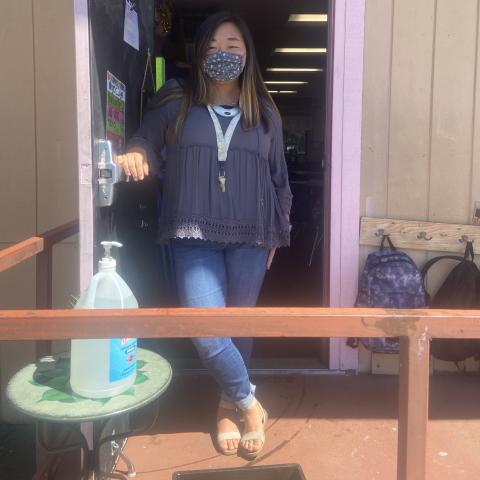 Samantha Kim is 25 and started teaching at Steele Lane Elementary School in Santa Rosa, right after she graduated from Sonoma State in 2017. She now teaches a combination class of fifth and sixth graders.

“These kids are starting to form their own identities a little bit and finding out what they know, what they believe in, and their personal philosophies,” Kim said in a zoom interview in March.

Now in her fourth year as a teacher in Santa Rosa, Kim had lost weeks of school because of wildfires and smoke. So when the pandemic hit last March, it felt familiar at first.

“I hate to say it seems so normal, but I almost feel like when it's announced, it's just like, oh, yep, another year,” Kim said.

When her school was first shut down in 2020, Kim thought it might be similar to wildfire season, missing a few weeks and then back to the classroom.

“I remember it because it was a Friday the 13th, and it was the day they were going to spring break,” Kim said. “And I remember not realizing the severity of what was going to happen. I don't think anybody really did. But they asked us to plan for two days worth of at home learning, which, thinking about it now, like come on, it’s been over a year.”

As the pandemic continued, Kim, just like all teachers throughout the county, had to adapt to an entire year of online teaching.

“The first week, I just sat at my computer and I was like, I I don't even know what to do,” Kim said. “Because I don't know what is expected of us. I don't know what I can even do without any of my classroom materials. The kids had a pencil and a textbook at home.“

Kim transferred her classroom to zoom. To keep her students excited about coming to class she leaned online programs like Pixton, where students can create their own graphic novels. She also organized virtual field trips to the Monterey Bay Aquarium and other places the class wouldn’t be able to visit during normal school hours.

“I would just share my screen with the kids over zoom,” Kim said. “I’d be like, we are getting in the plane, we're going to go to the Great Wall of China!”

And she experienced historical moments with her class online, like when President Biden was inaugurated last January.

“After Kamala Harris was sworn in, one of my students in the chat room said, ‘I feel so happy. I feel like cheering,’” Kim said. “And I was like, ‘you’re totally welcome to cheer. This is a very exciting moment in history.’”

Kim was finding ways to engage and stay connected with her students virtually. But she also really missed being in the classroom all together. Three months ago she was able to bring a small cohort of sixth grade student council members into school under county guidelines. And she noticed how happy both she and the kids were to be back on campus, in person. She talked about that experience at a board meeting of the Santa Rosa city school district, to urge them to re-open at least partially.

“I just have to share how special of a time it was because it made my heart so full during a year where it hasn’t always been," Kim said. "I'm so eager to get back into my classroom so I can be with my kids.”

A few weeks after Kim spoke at that school board meeting, the district agreed to bring elementary-aged kids back into the classroom. 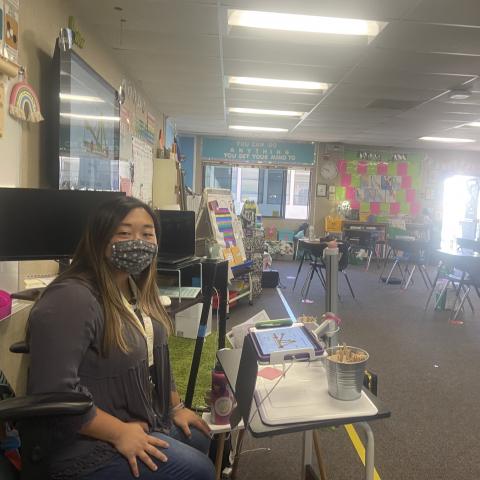 And on April 1, Samantha Kim returned to her classroom at Santa Rosa’s Steele Lane Elementary School in-person, for the first time in over a year.

“It was just nice to see them,” Kim said. “Some of them were really excited to see old friends or to meet people they've talked to on zoom, but never met in person.”

Her class, like most in the district, went from being full-time zoom to a hybrid model, where two groups of fifth and sixth graders come to class twice a week for a half-day and do virtual learning for the rest of the week.

“Once we got through Thursday, I feel like everyone was so tired,” Kim said.

Kim said a lot of this year was readjusting, like she has almost every year in a fire-prone area where missing weeks of school due to smoke is somewhat normal these days. But when she returned to her classroom in-person, there were some first-day jitters.

“The day before, I remember, I was so nervous,” Kim said. “Like, what if I forgot how to teach? But when the kids got there, it was just so good to see them.”

Just like how Kim had to get creative during distance learning, like thinking of virtual field trips to the Great Wall of China and the Monterey Bay aquarium, she also planned how to engage her kids back in the classroom. Because being back was an adjustment for a lot of her students who had gotten used to being at home in front of a computer screen all day long.

“There were some kind of funny, awkward moments the first couple days,” Kim said. “ I think it was learning to communicate again with other kids, for some of them.”

Kim said competition helped keep her students engaged. On a Tuesday afternoon in May, Kim was teaching her kids how to make catapults that launched water balloons across the school yard. The team that launched it the farthest won.

Other shifts Kim saw as a positive. Since the cohorts were smaller, it meant kids could learn in a more intimate environment, which meant there’s less acting out.

“They asked to play on the playground today, which I thought was really sweet,” Kim said. “Usually they're too cool for the playground but they were just having fun on the monkey bars. It was a good time."

Steele Lane Principal Amber Williams assigned every cohort a different color, which dictated when they went to recess and when they got picked-up, to avoid too many kids being in the same space at once.

“My heart is full,” Williams said. “I thought I was going to be a first year principal with no actual students in person.”

Williams started her first principal job during the pandemic and said 90 percent of all kids at Steele Lane returned to the classroom in the hybrid model, higher than the Santa Rosa School District’s overall return rate of seventy-five percent.

“We all worked our hardest and did the best we could do under the circumstances that we have,” Williams said. “We really want this place to be where kids really want to be everyday.”

Kim said she works every day to make her kids feel that way. She said teachers had to reinvent the way they teach to fit into distance learning and then the hybrid model, all while trying to keep kids as safe as possible.

“I definitely learned to be really flexible and learned to try new things," Kim said. "I think we’ve done a lot of fun stuff that I would like to carry over to, air quotes, a normal school year."

This story is part of a KRCB series about resiliency in Sonoma County during the pandemic.