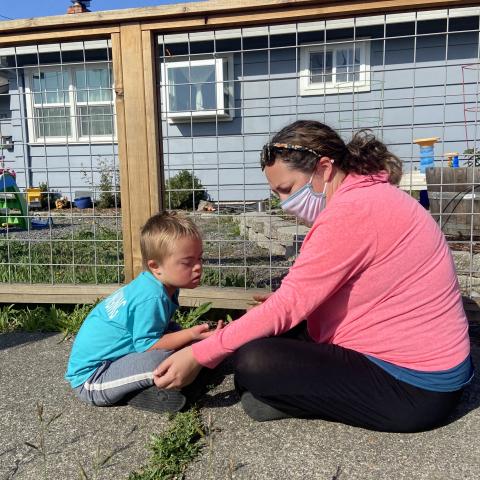 Larkin O'Leary and her son James, 7, playing in their front yard in between zoom therapies.
photo credit: Tessa Paoli

“Everybody knew James and they accepted him,” Larkin O’Leary, a mom and co-founder of the nonprofit Common Ground Society, said in a zoom interview last January.

O’Leary’s  seven-year-old son James started at Madrone Elementary School in 2019.  She said he loved being at school, he was known as the 'Mayor of Madrone,' playful and social. And six months into the school year, the pandemic hit, right before spring break. A few days before his sixth birthday.

“We didn't really get to celebrate his sixth birthday because he is so medically fragile that we were too scared to have people over," O'Leary said. "We did like a zoom thing."

And for a year he learned at home, in front of the computer, along with the majority of the over 9,000 kids with disabilities or individualized education programs designed for special needs across Sonoma County. James was diagnosed with Down Syndrome at birth and has hearing loss. But last year, right before he started kindergarten, he was the healthiest he’d ever been.

“Currently, he is your typical child,” O’Leary said.

But James, unlike most kids his age, has experienced lockdowns since he was born. He’s had 29 procedures and surgeries in his short life that have forced the family into quarantines before and after surgeries, not seeing friends or extended family to ensure he doesn’t get sick. So when COVID-19 hit, O’Leary said her family was used to sheltering in place.

“You know, it's been really stressful for him," O'Leary said. "Because I think that he's relating it to our time that we do our own shelter in place. We used to call it lockdown. We've had to do this forever.”

After a procedure wasn’t the only time the Santa Rosa family had to take extra precautions. Because they didn’t have air conditioning during the 2017 Tubbs fire, O’Leary drove James out of town to escape the smoke and would stay at friends' houses in the Bay Area to protect James’ sensitive lungs.

“I call it my Tour of California, where I would drive until I could find someone who would house us and then I would stay there for a little while with him," O’Leary said. "And then we would move on to our next place."

Like other kids across the county, James has had to miss weeks of school due to wildfire smoke, but this year of online learning in the pandemic was uniquely challenging. O’Leary was a teacher for the past 15 years in Sonoma County, where she’s from, but she said taking on so many roles at the same time, while caring for James’ two-year old sister, has been a lot on the family.

“I'm just exhausted," O'Leary said. "It's like, mentally physically exhausting to be his mom, his caretaker, his medical person, all his therapists now, because they're all on zoom. I say I need a secretary for my son because he just has a lot of appointments.”

For months, the majority of James’ therapies were done on zoom which amounted to a lot of screen time during the day. And O’Leary said his behaviors started to change during distance learning.

“I want him back in school," O'Leary said. "I want him in a different environment where he can understand that this is where we work, and this is where you get to just be James, and you get to come home and you play and we just love each other. Because right now, he's never punched me in the face before. He's never kicked me. That hasn't been been our life. He's always been a very loving kid. But now, the behaviors are just hard.” 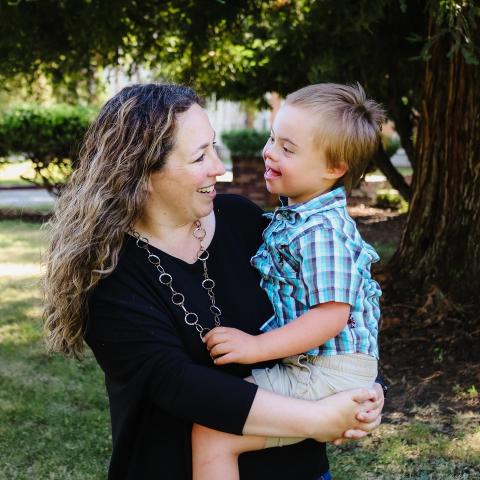 Larkin O'Leary and her son James, 7, who was diagnosed with Down Syndrome at birth.
photo credit: Photo courtesy of Larkin O'Leary's social media.

And on March 29, James stepped foot on Madrone Elementary school’s campus for the first time in over a year to finish kindergarten.

“You could tell the principal was so excited to see him," O'Leary said. "And he was excited to be there."

The first morning she dropped him off since the pandemic started, she saw a change on his face, even with a mask on.

“We pull up to school, and his eyes light up and he signs friends and he is singing and dancing and can't wait to get out of the car," O'Leary said. "And he's been doing really great wearing his mask."

Not only did James get to go back into the classroom this spring, but he was able to celebrate his seventh birthday with other people outside, unlike last year when things were just shutting down in mid-March. And the county’s sheriff department showed up with five cars ringing their sirens as a helicopter hovered over their house in honor of James.

"I just lost it," O'Leary said. "I started bawling, crying. Our community is just incredible.”

For two months, he’s been back in the classroom, at first in a hybrid model and now, just before summer vacation, in person five days a week for half-days.

“It just felt so good to see the mayor back in action,” O’Leary said.

In addition to being James’ mom and one of his primary caretakers, O'Leary also runs a nonprofit, Common Ground Society, to educate the community about people with disabilities. And she’s worked really hard to help people be more compassionate and inclusive.

“I've been concerned this whole time that all of my hard work for inclusion is for not," O'Leary said. "Like, we're gonna go back and people are gonna be like, what's, what's wrong with that kid.”

O’Leary said she fought to get James into a full inclusion school, or one where he’s learning alongside typically developing peers. So when the pandemic hit, she said she was concerned that other kindergarteners would treat James differently when he returned to the classroom, after a whole year apart.  But when she picked him up after school that first day, she saw kids waiting in line to talk to James.

"To show up on that day and have the kids waiting in line to be able to say hi to him, it was just incredible," O'Leary said. "And it made me feel like, you know what, we're moving forward."

But O’Leary said the social distance rules are an adjustment for James, like they are for most kids.

“He used to walk in and it was high fives and  hugs," O'Leary said. "And so now, they have to work on just waving hi or air high fives and things like that. It's a hard transition for him.”

She said the schedule changes from distance to hybrid to in-person and shifts in therapists have been a major adjustment for the entire family. And his teacher is still getting to know him and his learning needs in-person, like the fact that subjects like math are harder for him.

“I wasn't able to be the one to open my arms and have him come in and give hugs when the hard things were happening,” O’Leary said. “I was the one making the hard things happen.”

O’Leary said being home and playing the role of mom, teacher and therapist has been hard, even as a veteran teacher.  But now that James is back in the classroom five days a week, she can focus more on just being his mom.

"Being able to be the one who's comforting and nurturing again, it just feels really good," O'Leary said.

O’Leary said she’s really looking forward to the fall, when James should be able to return to his fully included first-grade classroom, the one she fought so hard to get him in into.

“I am just so incredibly grateful for the work that everybody is putting in," O'Leary said. "I know that this has been hard on everyone. I can't stress enough how hard it's been on on parents of kids with disabilities and special needs. But it's not to negate the fact that others have gone through a lot as well, and people are working towards getting us all back,” O’Leary said.

This two-part story is the first of a KRCB series about resiliency in Sonoma County during the pandemic. You can find out more about O’Leary’s work at  Common Ground Society.