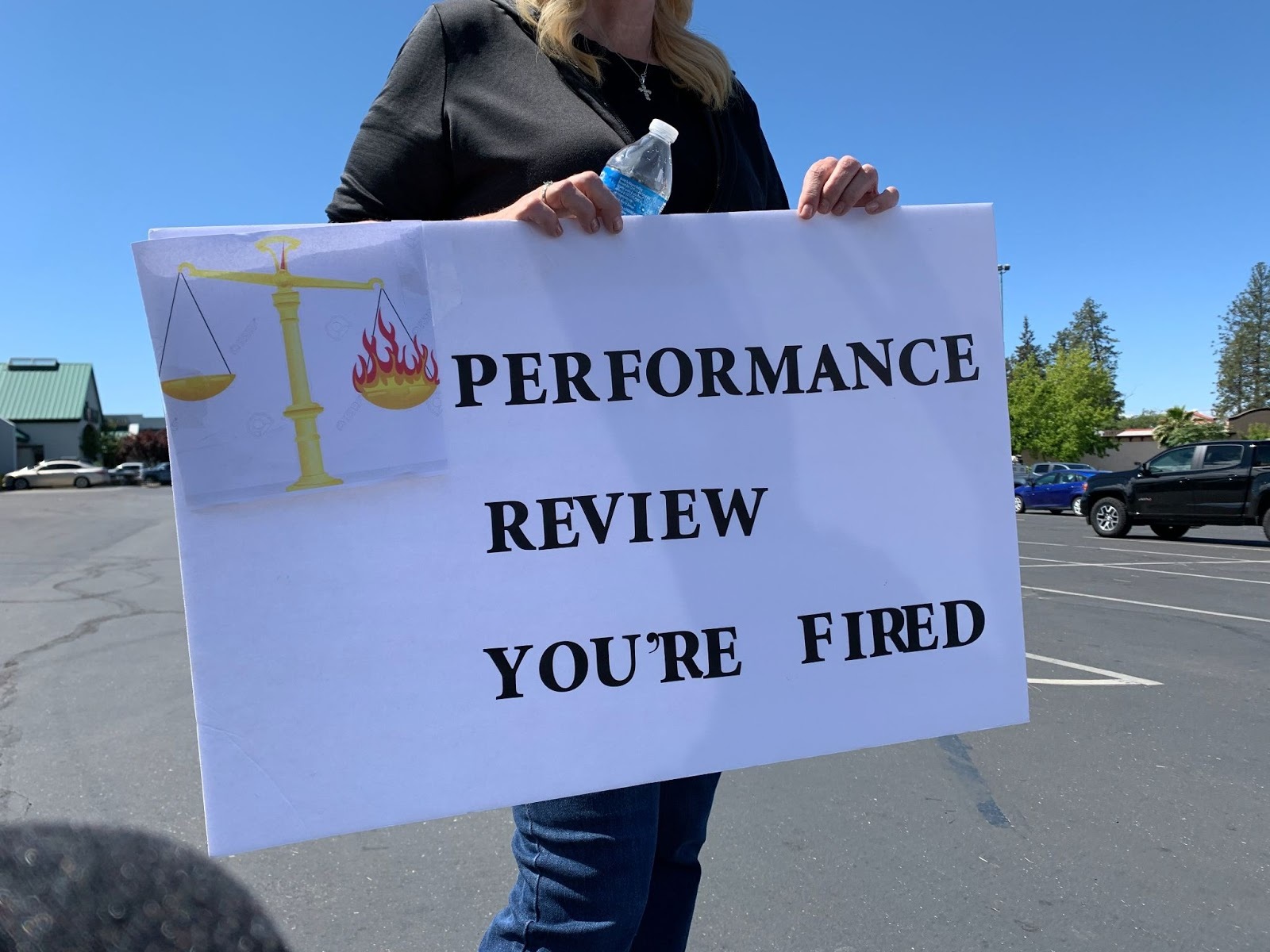 A bipartisan group of state lawmakers has asked for California Attorney General Rob Bonta to probe the spending and administration of the PG&E Fire Victim Trust.
The request comes after a KQED investigation into overhead costs of the Trust, which was established as part of a December 2019 bankruptcy settlement between the utility and nearly 70,000 victims of fires caused by PG&E equipment.
The investigation found the Trust spent nearly 90% of outgoing funds on overhead last year, while the vast majority of fire victims waited for help.
“We urge you to use the full authority of your office to review the fund’s recent expenditures and the fund’s administrators,” said the letter, which was signed by 11 state senators and assemblymembers who represent areas impacted by PG&E fires between 2015 and 2018.
“We hear every week from residents who've been waiting two years for settlement payments that they are due. Their lives are on hold until they receive these dollars,” said state Sen. Mike McGuire, D-Healdsburg, whose district includes parts of Sonoma County.
“It's unacceptable. It's egregious and it has to change, and it's why we're calling on the trustee to expedite payments to fire survivors in Northern California,” he added.
State Assemblymember James Gallagher, a Republican who represents the fire-ravaged town of Paradise, first announced last week on KQED Forum that he and colleagues were preparing a letter calling for more transparency. KQED's investigation "raises a lot of questions and concerns that need answers," Gallagher said. Others who signed on include state Sen. Bill Dodd, D-Napa, Assemblymember Cecilia Aguiar-Curry, D-Winters, and state Sen. Jim Nielsen, R-Tehama, all of whom have constituents harmed by fires caused by PG&E’s equipmentequiptment and are waiting for compensation.
KQED found the Fire Victim Trust racked up $51 million in overhead last year, while $7 million was distributed to fire victims during that period. The investigation was based on an analysis of federal bankruptcy court filings, court transcripts and correspondence between the Fire Victim Trust and fire victims. The largest share of overhead expenses, $16.3 million, went to claims processor fees and expenses, and $12.7 million went to start-up costs. Another $6.8 million went to a line item described as  “insurance, data, and other expenses” — nearly as much as went to the fire victims themselves.
“This is outrageous,” the lawmakers wrote to Bonta, “especially in light of the fact that thousands of fire victims are struggling to rebuild their lives.”
In response to an inquiry from KQED, Bonta’s office said the attorney general would not comment — even to confirm or deny — a potential investigation.
Members of Congress have also expressed outrage at the pace of payments to fire victims. In separate emails, Rep. Mike Thompson, a D-St. Helena, and Rep. Doug LaMalfa, R-Richvale, both called for faster payouts.
The pace of payments has picked up in recent weeks. According to the most recent data available, the Trust had distributed $255.4 million as of May 19. Still, just 565 of nearly 70,000 people have had their claims processed and paid, the data shows. While the Trust collects its fees in full, those families are getting 30% of what they are owed. That’s partly a result of the terms of PG&E’s settlement agreement with fire victims. The company is funding the Trust half with cash and half with PG&E stock. Today, the Fire Victim Trust holds almost a quarter of PG&E shares. 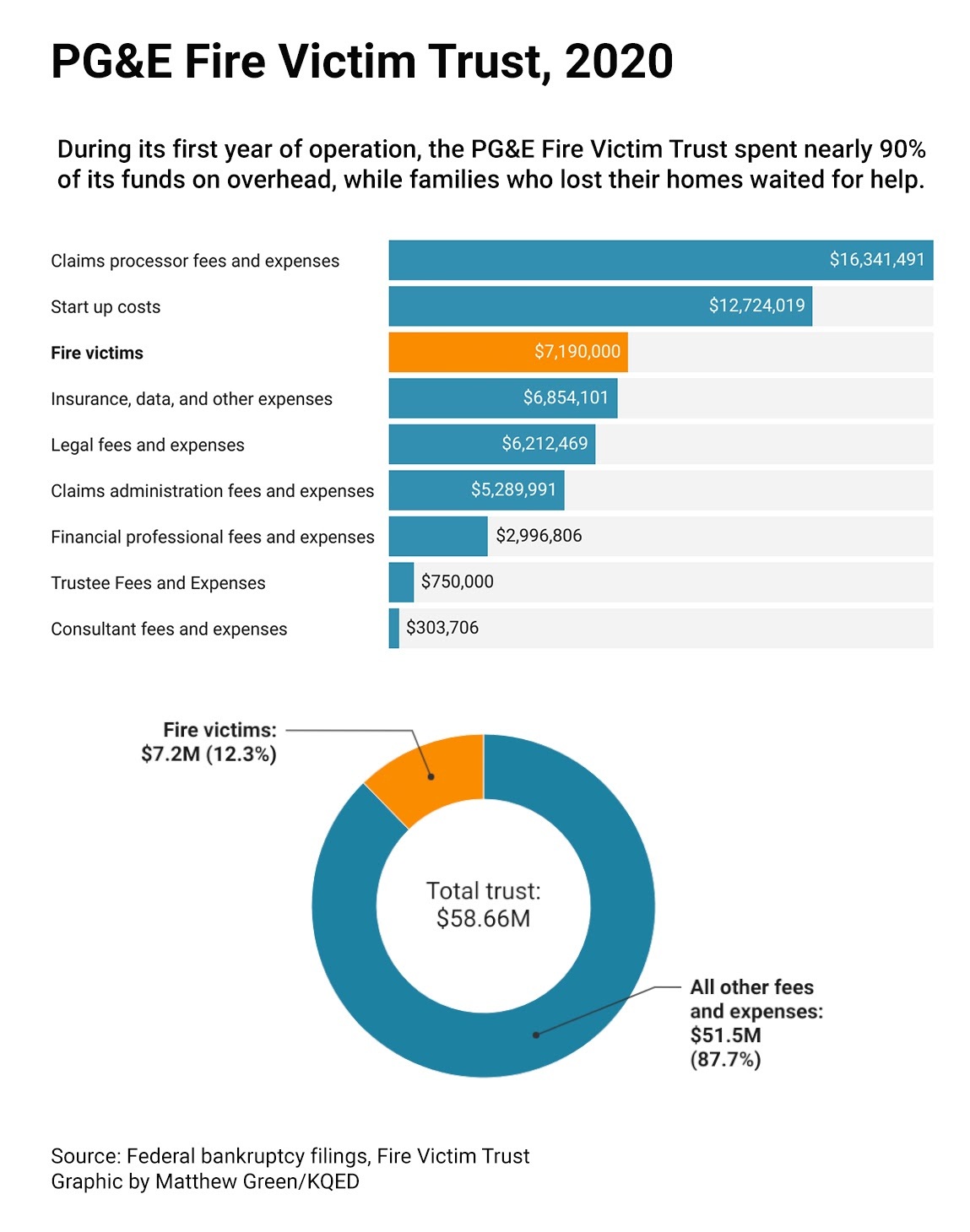 One court filing showed the Fire Victim Trust’s Trustee, retired California Appeals Court Justice John Trotter, charged the Fire Victim Trust $1,500 an hour. In a video released last week, he said he is now on a salary of $150,000 a month. All overhead costs come from funds set aside for fire victims.
ftrThe Trust did not offer comment for this story, and has declined all of KQED’s interview requests over the last month.
In his video message, Trotter acknowledged the frustration of fire victims even as he predicted more delays.
"We're still walking uphill on this,” Trotter said. “We're not near the top yet. We're making progress. We're getting there. When we get to the top and down the other side, it will go much more quickly."
Fire victims say that’s not enough.
Earlier this month, retired police chief Kirk Trostle wrote to U.S. Bankruptcy Judge Dennis Montali asking for more transparency from the Trust.
"Families are still living in cars, travel trailers and FEMA trailers," wrote Trostle, who lost his home in Paradise in 2018, in a letter that cited KQED's reporting.
Last weekend, about 100 Camp Fire survivors staged a rally in Paradise to register their frustration, saying survivors have the right to know exactly where all of the Trust’s administrative dollars are going.
“I thought that I was healing,” said Teri Lindsay, whose daughter, Erika, wiped back tears as she watched. “Until that report came out — it changed my life and took me back to the day. I did not realize how well they’re being paid and we’re living in squalor still.”
Page 1 of Special Victims Trust AG Letter - Legislature - 5.21.2021