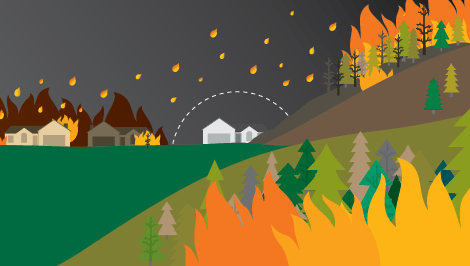 When fire rages out of control, few things survive. But smartly-built homes with fewer vulnerabilities have a fighting chance.

On Thursday, in a pitch to encourage homeowners to go beyond ‘defensible space,’ State Insurance Commissioner Ricardo Lara announced the first fruits of efforts to collaborate with fire officials and home insurers to reduce vulnerabilities to wildfire.

Funded by a local property tax measure, Tyler says his department has hired five inspectors--looking for things like roof eaves and vents with mesh too big to block embers.

The program provides matching funds to help defray costs of what's called ‘home hardening.’ And making sure the work is completed. Tyler says some homeowners, initially contacting the district over concerns about neighboring properties, learn a few uncomfortable truths.

“They are surprised to learn that the type of plants that they’ve had, that is drought resistant, deer resistant, that they haven’t had to do a lot of work on, suddenly is like a gasoline can sitting next to the side of the house.”

Lara is working to convince insurers to become more involved with home hardening efforts, as they’d potentially benefit from covering fewer losses. He says for now he’s gotten eight insurers, along with the state’s FAIR plan, an insurer of last resort, to discount home insurance rates on homes where vulnerabilities have been addressed. Lara said those firms account for 13 percent of California’s home insurance market.