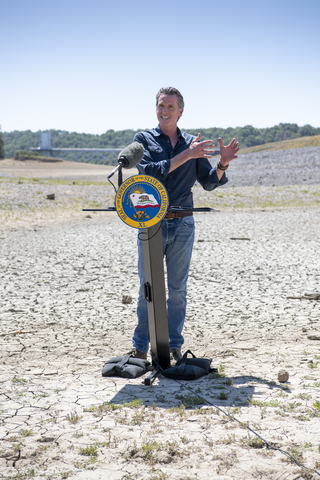 On dry land that should be beneath Lake Mendocino, Gov. Gavin Newsom declared a drought emergency for Mendocino and Sonoma counties in April. Photo courtesy Calif. Department of Water ResourcesComing off back-to-back miserly rainy seasons, indications are growing that California firefighters and residents are staring down a fire season without equal.

Already, CalFire has controlled or extinguished 30 wildfires this year. That’s five more than the previous two years--combined. Reservoirs in Sonoma and Mendocino counties are at levels typical for September, and it’s barely mid-May. Conditions throughout California aren’t much better.

Reservoirs are just one sign. Brent Wachter is a US Forest Service meteorologist assigned to Predictive Services, a federal interagency weather forecasting group. He says trees and shrubs are more than thirsty while dropped branches, twigs and other forest floor debris is extremely dry.

“All along the coast of California, the readings, the dead fuel moisture readings are what we would typically see in July.”

Being more susceptible to ignition this early in the year, is a troubling omen.

“It just opens up, it extends that period of what I would term ‘Flame-On.’ It just really increases the probability of those large, devastating wildfires.”

Medium and long range models suggest typical coastal fog should mitigate that hazard to some degree through early summer, at least where the marine layer regularly intrudes. 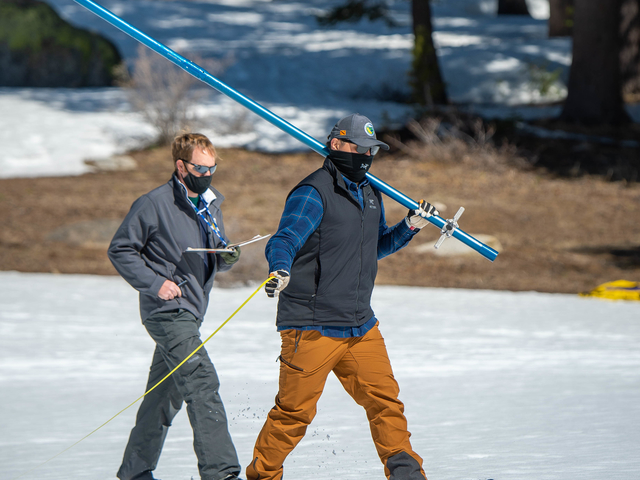 DWR engineers prepare to measure California's snowpack in the Sierra. They found very little at the final survey April 1. Photo courtesy Calif. DWRver, Wachter says flurries of scattered thunderstorms and dry lightning in late July and early August are more likely this year than the recent past. This fairly typical pattern occurs as lingering moisture from the southwestern monsoon, remnants of sub-tropical Pacific storms get pulled northward. One such pulse last year, showered California with 10,000 lightning strikes over 24 hours, sparking fires that burned well over a million acres.

Wachter says it’s too early to know if next winter’s rains will be prodigious or stingy, and also too soon to accurately predict the timing or intensity of dry, north and easterly winds in the fall. That’s when the backside of storms drifting from the Pacific Northwest toward the Rockies can whip up desiccated gales--capable of fanning sparks into a firestorm.

“The last few years we’ve had a pretty robust fall wind event pattern from the north and east. And, it’s possible there are connections to sea ice and the lack thereof across the arctic.”

While that remains under study, if true it could portend a fiery future for California and its residents.