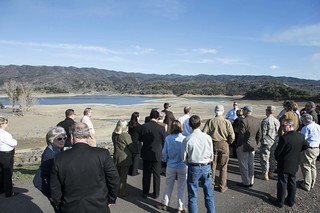 Standing on the dried out bed of what should be Lake Mendocino, Gov. Gavin Newsom declared a drought emergency for Mendocino and Sonoma counties April 21More than half of California has slipped into extreme drought, according to the federal drought monitor. And with summer-like heat arriving sooner and lingering longer, California may be facing a dry season for the record books.

Two years of below-average rainfall have drained California of the deluges of the 2016-2017 winter.

UCLA Climate Scientist Daniel Swain, also associated with the National Center for Atmospheric Research and the Nature Conservancy,  says conditions in Northern California today are nearing where they were at the peak of the drought between 2013 and 2016. And that the state is drying out even faster now.

"Water scarcity, in some respects, is already sort of getting to where we were at the peak of the last drought, but there was quite a long build up to that one."

All of California is considered in drought, with nearly 98 percent of the state in severe, extreme or exceptional drought. That compares with just a fifth of the state a year ago, according to the drought monitor.

While sub-par winters are far from an anomaly in the state, Swain says in recent years summer heat has been arriving earlier, and lingering longer, than historically. That added strain on shrubs and trees could present major challenges to firefighters and those depending on them in the months ahead.

"There's essentially a year or more of missing precipitation over the past two years in Northern California and it's also been much warmer than usual which means there has been more evaporation and that there's even less water available than there would have been with the same precipitation deficit, but with cooler temperatures."

Swain says while the rainfall of the last prodigious winter, in 2016 and 2017, may have filled reservoirs, the rain and snow failed to appreciably recharge groundwater aquifers. Or fully revive stressed trees or aid soil moisture.

A drought emergency has been declared for Mendocino and Sonoma counties. And Swain noted renewed discussion of a temporary pipeline over the Richmond-San Rafael Bridge, enabling the Marin Municipal Water District to draw water from its East Bay counterpart.