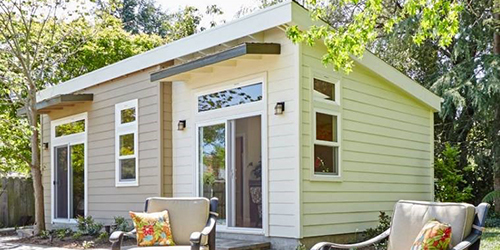 Ordered by Sacramento to encourage more so-called granny flats, Healdsburg has gone a step further in hopes of encouraging a mini building boom.

The Healdsburg city council is revising rules around the construction of small rentals added to a property where a home already sits. They're officially known as Accessory Dwelling Units or A-D-Us.

Written to comply with a mandate from Sacramento, the proposed regulations eliminate development fees for such units---potentially trimming somewhere around 25,000 dollars off the overall cost to build. Units could be built wherever single family homes are allowed.

The concept is one of several strategies aimed at reducing California's chronic housing shortage and astronomical home prices.

Healdsburg's interim community development director Luke Sims says the push should allow some to find housing closer to their jobs or school, "and do so without altering the character of the community."

Sims says he expects about two dozen new projects by the end of next year. He says that's up from an average of about 15 a year.

Real kitchens and bathrooms, though not elaborate, would be required---a hotplate and microwave won't cut it, Sims says. And owners will be banned from using them as vacation rentals.

A final vote is expected next month, with the new regulations potentially taking effect in June.