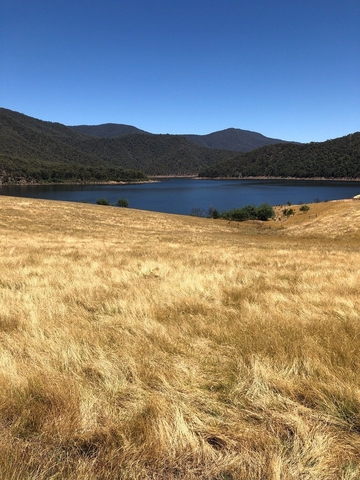 One of the driest winters on record locally, may cause serious water issues this summerBy Marc Albert

The rainy season has hardly been generous. California’s two largest reservoirs are less full than they should be. While the statewide situation is concerning, Sonoma County is in worse shape.

With the month winding down, a ‘Miracle March’ is looking less and less likely. Just 11 inches have fallen at Ukiah this winter. The three reservoirs serving the region: Lake Sonoma, Lake Mendocino and Lake Pillsbury are far from full. The Sonoma County Water Agency, better known as Sonoma Water, says we’re in the third driest year on record.

Pam Jeane, Assistant General Manager of the agency predicted the drought will be felt by all in coming months.

"Every sector, whether it’s residences, agriculture, recreation, the environment, the fish, the wildlife. Everybody is going to be impacted in some way.”

Hoping to assure supplies don’t dwindle, the agency received permission to release less water into the Russian River from Lake Mendocino more than a month ago. The agency also notified it’s few agricultural customers to expect no water this year.

Jeane said she doesn’t expect major impacts to recreation or significant water quality issues in the Russian River that would hinder recreation this summer.
Non-human species may not be as lucky. Dr. Stephen Swales, an expert in Coho salmon recovery with the California Department of Fish and Wildlife said rivers and streams will likely have less water in them, allowing water temperatures to climb. That will add additional stress to an once abundant species now struggling.

“Turn off the water when you’re brushing your teeth. Make sure you don’t have any leaks. Leaks can cause all sorts of wasted water issues.”