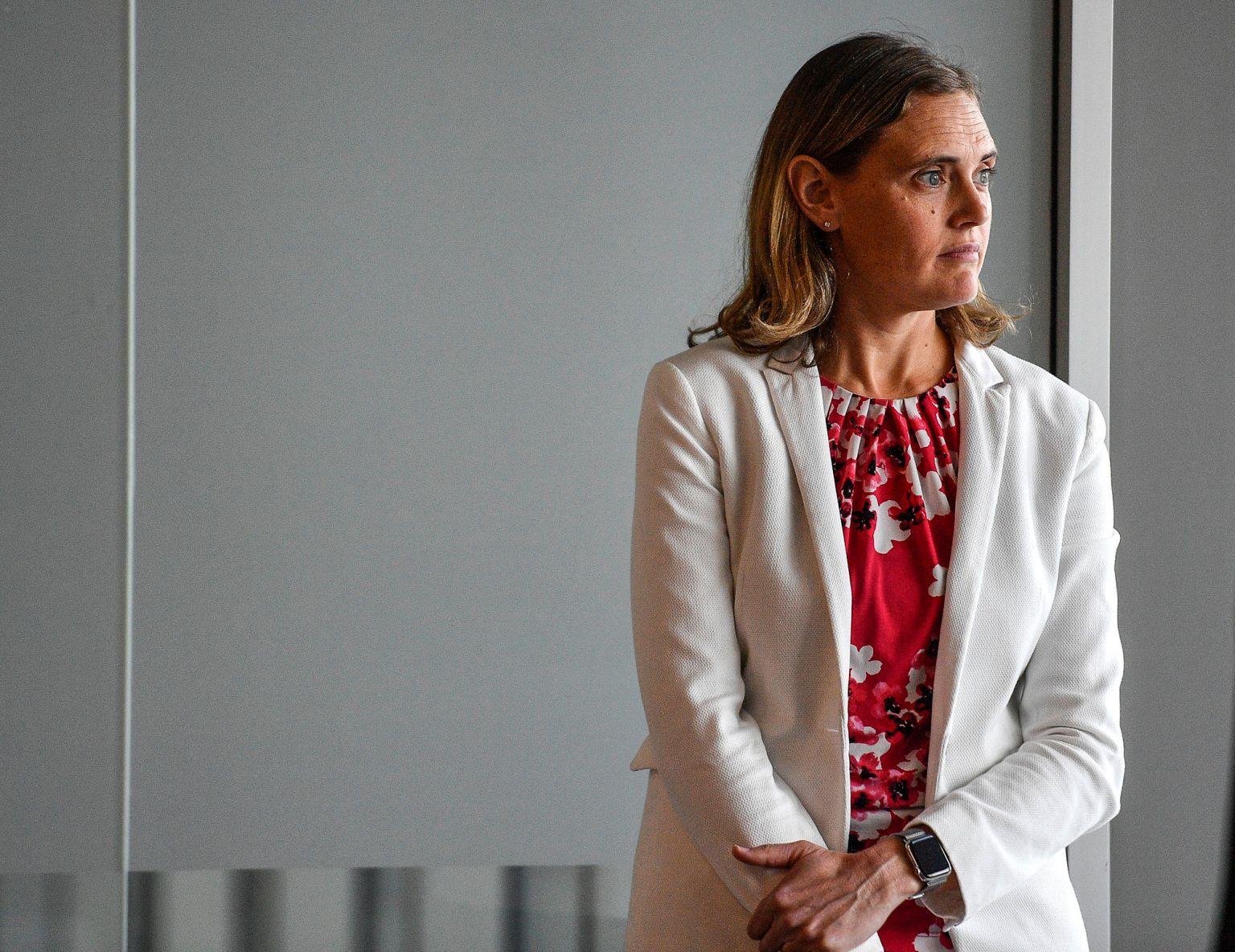 Leigh Dundas angrily wagged her finger at Orange County supervisors at their board meeting last month as she ticked off what she thought were damning details about the professional background of county health officer Nichole Quick. The anti-vaccination attorney named Quick’s boyfriend and disclosed her home address, saying she was going to bring protesters in masks to do calisthenics on her front doorstep until they passed out.
“She needs to be fired,” Dundas declared.
It was a strikingly personal attack on Quick, who had vexed many local officials and residents alike with her recent order requiring that people wear masks when in public to prevent the spread of the novel coronavirus. The county sheriff provided her with a security detail even as he said he would not enforce the mask order. Finally, under pressure from both county supervisors and the public, Quick resigned last week, the third high-level Orange County health official to do so during the pandemic. And Orange County reversed her mask order.
Local public health officers haven’t been this important in a century. They’re also being second-guessed, harassed and threatened by residents, and sometimes local leaders, angry about pandemic shutdowns. Some have simply quit.
Four other health officers in California have resigned or retired in the last two months, in Nevada, San Benito, Yolo and Butte counties, as have two public health department directors in San Bernardino and Orange counties (in addition to Quick). On Monday, the state reported nearly 150,000 confirmed COVID-19 cases and more than 5,000 deaths.
This isn’t just happening in California. Ohio’s state health director, Amy Acton, resigned last week after facing legal challenges to her authority and protests in front of her home. Wisconsin state health director Jeanne Ayers was asked to resign in early May, at a time when COVID-19 cases in the state had surpassed 10,000, and top officials would not say why.
(Orange County Chief Health Officer Dr. Nichole Quick resigned June 8, after receiving threats over her order for residents wear to face masks in public to protect against the coronavirus. Quick is one of several local health officers in California to quit since the pandemic began. Photo by Jeff Gritchen/The Orange County Register via AP)
“Things have gotten ugly,” said one Northern California health officer who asked not to be named over personal safety concerns. “The health officers are kind of in this position where everything that everyone is angry about is the health officer’s fault.”
The official described death threats received by email and on social media as well as protesters showing up to their home. “It … makes you feel that there is nowhere that’s safe.”
California Gov. Gavin Newsom’s reopening strategy, which asks counties to certify that their COVID-19 cases are under control, was a “terrible decision…that deflected all the political pressure to local officers,” the Northern California officer said.
County health officers occupy a unique position in local government. They’re responsible for overseeing the public health response to disease outbreaks, among many other duties. Every county, and a few cities that run their own public health departments, must designate one. They are not elected officials and typically are appointed by county executives.
In emergency situations, health officers have legal authority to shut down businesses, order millions of people to stay at home, isolate or quarantine people, even order mass evacuations. They also can issue orders, such as requiring people to wear masks in public, that are stricter than state mandates.
Their authority can be challenged in court, and health officers are subject to due process, said Kat DeBurgh, executive director of the Health Officers Association of California.
But that power comes with a price as the worst pandemic in a century unfolds in a politically polarized nation.
“Health officers are always there working in the background to protect communities from communicable disease. This is the first time I’ve seen this level of animosity,” DeBurgh said, noting that one health officer she would not name has a sheriff’s security detail posted outside her home.
Californians emboldened by a president who initially played down the pandemic and now refuses to wear a mask, feel freer to vent their frustrations on health officers placed front-and-center at press conferences and government meetings, said Dr. Jonathan Fielding, who served as Los Angeles County’s health officer for 16 years and now is a professor at the UCLA school of public health that bears his name.

“None of us has the unfettered right to do what we want,” Fielding said. “People are saying, ‘Our president’s not doing this, why do I have to?’ That’s one of the roots of this problem — the radicalization of views on individual rights.”

A full-page ad published in the San Jose Mercury News blasted Santa Clara County health officer Dr. Sara Cody, who ordered the nation’s first local shelter-in-place lockdown. It accused Cody of “cratering our economy” and asked her to permanently donate her salary and pension to “those you are impoverishing.”

On social media, people circulated a doctored photo of Los Angeles county health officer Dr. Barbara Ferrer that made her appear very ill, with pale skin and deep circles under her eyes. A tweet calling Ferrer “the most unhealthy looking person I’ve ever seen” was retweeted 29,000 times and “liked” by more than 89,000 people.

In a sign of just how tense things have become, Santa Cruz County supervisors in late May briefly shut down a public meeting about reopening when a pizzeria owner approaching a microphone veered away and started walking toward the county’s health officer. He told the supervisors he was just trying to read her name, the Santa Cruz Sentinel reported, but they weren’t taking chances.

We are deeply concerned that politics may be trumping public interest in some of these cases, and that the public’s health may be compromised as a result,” California Medical Association president Dr. Peter Bretan Jr. said in a statement.

Former Santa Barbara County health officer Dr. Charity Dean, who had become second-in-command at the state Department of Public Health, submitted her resignation June 4, as first reported by CNBC. A few days later, she tweeted her encouragement to other health officers: 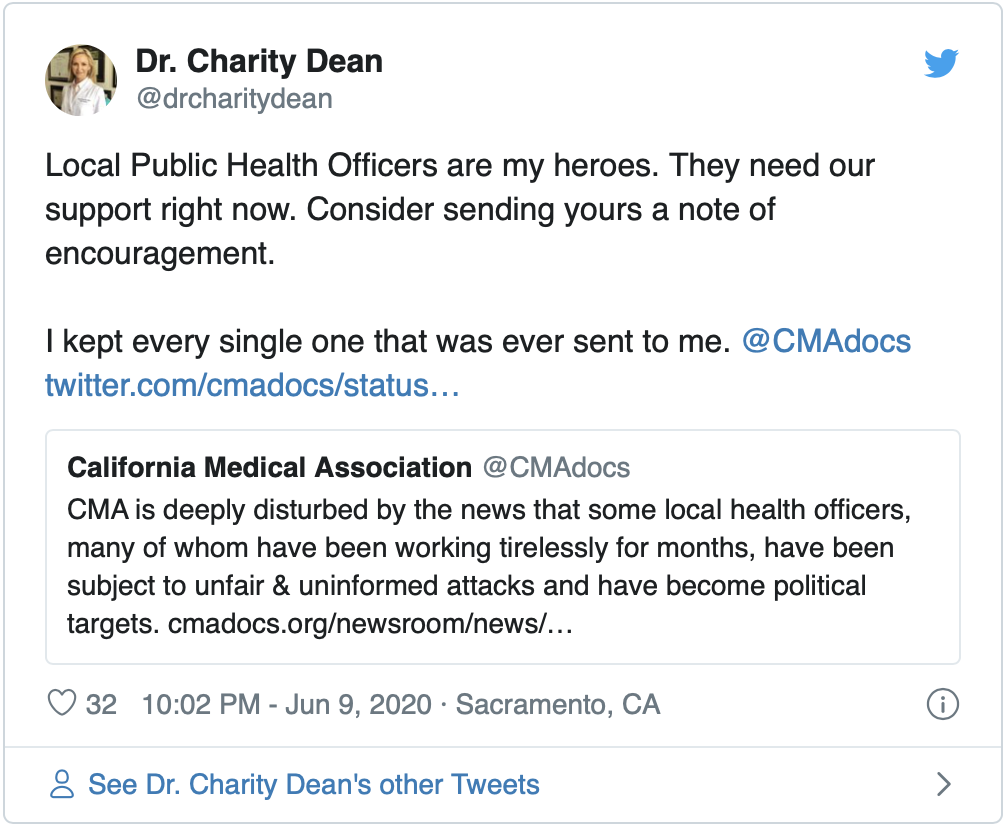 State Sen. Richard Pan, a pediatrician who has received death threats and been shoved by an activist over his childhood immunization lawmaking, described the statewide harassment of public health officers as “shameful.”
“Our public health officers are given the responsibility to act in the best interest of the public – they certainly should not be personally attacked and bullied and intimidated,” Pan said. “The job’s already challenging enough.”