Written by Kacey Sycamore
Published: 08 May 2020 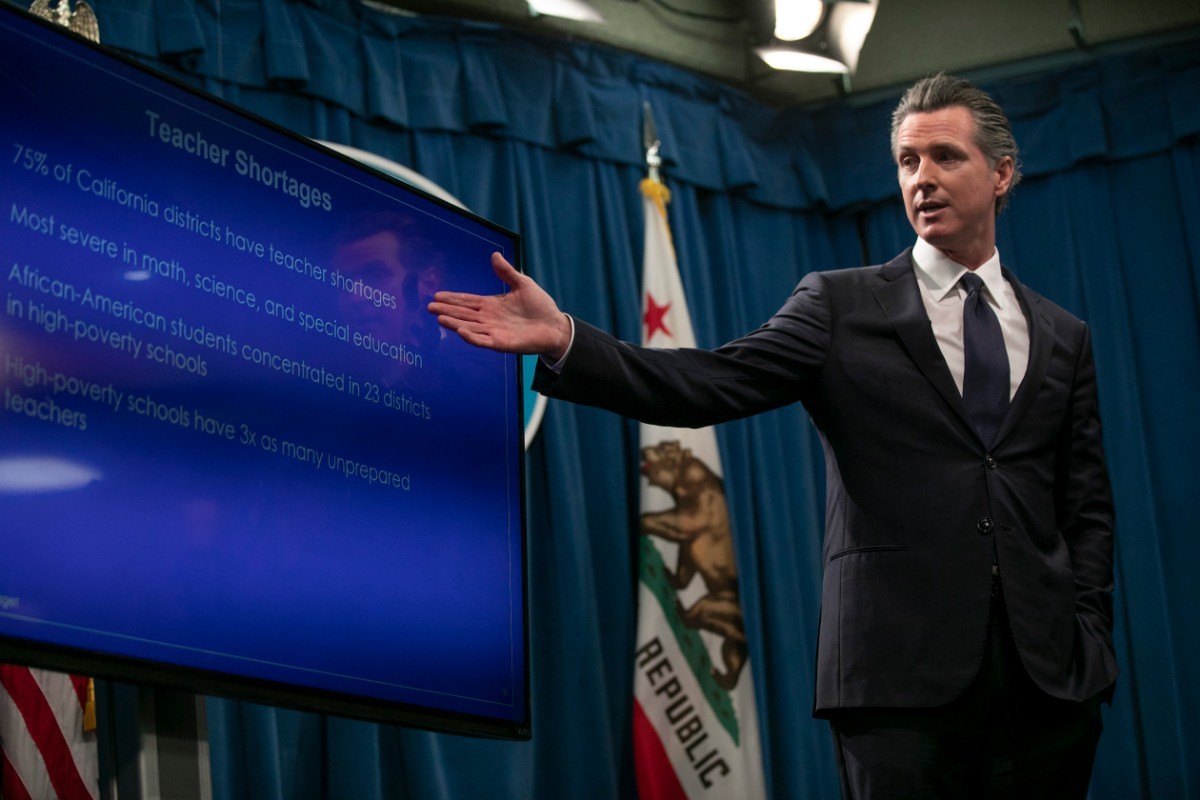 California finance officials revealed a $54.3 billion deficit Thursday in the first economic assessment of the coronavirus pandemic’s devastating blow to the fifth-largest economy in the world.

That figure is higher than the deficit during the Great Recession and obliterates the state’s once-healthy reserves.

(Image: In this file photo, Gov. Gavin Newsom presents the 2020-21 state budget at a press conference at the California Capitol on Jan. 10, 2020. Photo by Anne Wernikoff for CalMatters)

The California numbers signal a financial tsunami and cuts to schools, health care and safety-net programs, as state and local governments turn to the federal government for additional stimulus support. In one example, California’s public school system, including K-12 and community colleges, will lose $18 billion in the state’s minimum-funding guarantee, setting back years of striving to reach adequate education funding.

Newsom Thursday stressed once again that California had balanced its budget and headed into this year with a huge surplus — all undone by the pandemic. He said the state is resilient and can rebound, with a caveat.

Lawmakers began to prioritize the programs they hope to protect. The Legislature will take up the budget after Newsom releases his proposal on May 14. Lawmakers will then have until June 15 to pass a balanced spending plan.

“I want to keep education as whole as possible,” Sen. Jerry Hill, a Democrat from San Mateo. Referring to deep cuts made during the last recession, he added, “we cannot abandon another generation of children.”

The governor had warned that the budget figures would be “jaw-dropping” and sought to brace the public for a prolonged recovery. Newsom struck a positive note: The state was in a better position to withstand the crisis because it paid down debt and built up reserves in good years.

Still, the deficit is three and a half times the state’s $16 billion rainy day fund and nearly 37% of the state’s general fund.

“I urge strongly everyone to endorse this measure because, again, we’re going to need revenue,” said Stockton Mayor Michael Tubbs.

It remains unclear how a recession will affect voters’ mood for a tax measure. Business and anti-tax groups have vowed vigorously to oppose the measure, saying it harms businesses.

The governor’s budget update projects California’s economic losses will fall disproportionately hard on low- and middle-income Californians, which will only exacerbate income inequality. At the same time, low-income households and people of color are at greater risk of contracting and dying from the virus as the number of confirmed cases reaches 60,000.

Since mid-March, Californians have filed more than 4.2 million unemployment claims.

“This is particularly concerning because the average income did not return to pre-Great Recession levels until 2018,” wrote the Department of Finance in its fiscal update Thursday.

It’s an about-face for a state that began the year with ambitions of expanding child care for working parents and health care for undocumented seniors. Compared to the budget Newsom released in January, the state’s three main revenue sources in the general fund are now projecting a 25.5% drop in personal income taxes, 27.2% drop in sales taxes and 22.7% drop in corporate taxes

The $54.3 billion deficit is driven by three factors: $41 billion in revenue loss, $7 billion increase in health and human services programs, mainly Medi-Cal, the state’s health program for the poor, and about $6 billion in additional spending, mainly driven by the state’s response to COVID-19. The Newsom administration’s response has come under scrutiny as lawmakers demand oversight of multi-million dollar contracts and federal investigators look into supply deals gone awry.

Now anti-poverty advocates are bracing for a deja vu.

The Great Recession led to deep, painful cuts to California’s social safety net — such as CalWorks, California’s welfare program for families with children, Supplemental Security Income for elderly and disabled people, and subsidized child care — even as unemployment and poverty spiked. Many social safety net programs are still less generous than they were in 2007.

“It’s devastating because at a time when people need government the most — which is any recession — it’s also the time when we have limited ability to help,” said Assemblyman Phil Ting, a San Francisco Democrat and chair of the budget committee.

Here’s how the deficit may impact major programs:

Before the pandemic struck, California’s twin housing affordability and homelessness crises were at the top of Newsom’s 2020 agenda. The self-proclaimed setter of “big, hairy, audacious goals” devoted his entire State of the State to housing the more than 150,000 Californians living outside or in shelters, and vowed to enact a signature bill to ease the state’s housing shortage.

California will have to scale back those ambitions, including:

Proposals to ease rules and regulations on homebuilding are also in danger. A slew of bills to reduce the fees cities can charge developers for new housing will run up against local governments’ desperate need for revenue. And legislative efforts to get cities to build denser housing may fail without new dollars for infrastructure and low-income housing.

Despite record increases in school funding over the last decades, the state’s school districts never seemed to fully recover from the devastating cuts made during the Great Recession. The state increased school spending by about $24 billion since 2013 through the Local Control Funding Formula at same time as schools saw significant increases in fixed costs, such as special education, healthcare and employee pension obligations.

For many schools, those rising costs offset the increases in state funding.

The state’s projected $18 billion decrease in minimum funding guaranteed for K-12 schools and community colleges come at a time when school officials are asking for more state and federal support to help cover emergency spending, such as buying computers to facilitate distance learning and distributing food to students in need.

The California School Boards Association estimates districts have spent roughly $400 per student, or $2.4 billion, responding to the coronavirus pandemic.

Already the COVID-19 pandemic has led to hundreds of millions of dollars in losses for the University of California and the California State University.

Through March, the UC reported losses and higher costs of $310 million because of the pandemic. The CSU says it has $337 million in revenue losses and new expenses for its spring semester because of COVID-19. The federal government did dole out stimulus to help out colleges, but the money isn’t enough to shore up the losses in California, say legislative analysts.

Community colleges will likely have a shortfall of $2 billion in state support based on projections from California finance officials.

The last recession gives clues to the hit on colleges. Staff reductions and class cuts had imperiled students’ chances of earning certificates and degrees.

Whether students will face tuition increases is an open question. While tuition and fees were already rising before the last recession, the trend only accelerated at the UC and CSU, where tuition effectively doubled between 2008 and 2012. And while state funding for the two public university systems has risen since the recession, they’re still well below per-student levels before 2008.

Medi-Cal, the state’s Medicaid program, covers almost 13 million, or nearly one in three, Californians. But the pandemic is expected to drive that number up to 15 million.

Since eyeglasses and hearing aids are not required by the federal government, they are most likely the first benefits to be cut by the state, said Linda Nguy with the Western Center on Law and Poverty.

Health advocates sought to expand Medi-Cal to undocumented seniors, but the proposal will be a tough sell in the current environment. “I think this is a message to temper our expectations,” Nguy said.

“We can’t afford to go back in the middle of a pandemic when so many people have lost employer-based coverage and need that help,” said Anthony Wright, executive director of Health Access, a statewide health advocacy group.

Immigrant advocates had hoped to extend California’s Earned Income Tax Credit to undocumented workers who file taxes. Now, they say it’s even more crucial. Undocumented and mixed-status families have missed out on unemployment insurance and the federal stimulus check, yet work in some of the hardest-hit industries. But at a price tag between $117 million and $167 million, it may be cost prohibitive.

Newsom had contemplated closing a state prison at the start of the year as the prison population fell from 165,000 in 2010 to 112,000 as of this month. A pre-pandemic budget proposal from the Legislative Analyst’s Office recommended closing two prisons.

The criminal justice system was forecast to spend $19.4 billion on courts, prisons, probation and parole, up $341 million from the last year, the vast majority of which — $13 billion — goes to prisons, parole and probation.

The analyst’s office recommended expanding pretrial diversion services to include misdemeanor convictions in an effort to reduce the number of people sent to prison.

The analyst also recommended against reducing the time individuals spend on probation, a proposal the office predicts would lead to longer — and therefore, more expensive — prison and jail sentences.

While California’s green intentions seem baked into the DNA of state policy, key environmental programs could nevertheless be put on a starvation diet in the upcoming budget.

Funding for transit, clean car rebates and urban forestry have all seen cuts during past recessions, according to a report from the University of California, Los Angeles that could foreshadow decisions to come.

Newsom signaled that California would prioritize the fight against climate change, outlining $12 billion-worth of climate programs in his January budget proposal. But continued funding for clean-car rebates and charging stations, some wildfire prevention programs, and funding to support response to immediate climate impacts could be reduced.

Some of those programs were contained in the governor’s nearly $5 billion climate resiliency bond, which would have allocated 60% of the funds for water-related projects, a particular interest of the governor.

In jeopardy, too, is the $20 million set aside to establish the first new state park in a decade.

Newsom’s initial budget was hailed by early childhood advocates for increasing child care, preschool and other efforts to support working parents. His proposal had

included $10 million to start a training program for adverse childhood experiences and raise public awareness on childhood trauma, not to mention an additional $31 million to create 10,000 more preschool slots.

Now those initiatives will likely be shelved.

“Child care took the brunt of the cuts during the last recession and we will fight hard against that same outcome,” said Keisha Nzewi, director of public policy for the California Child Care Resource & Referral Network. “It will be up to the governor and the Legislature to figure out how to keep child care functioning, because without it, Californians can’t go back to work.”