Newsom: Cities Blocking Hotels for Homeless Will Be ‘Judged’ by History 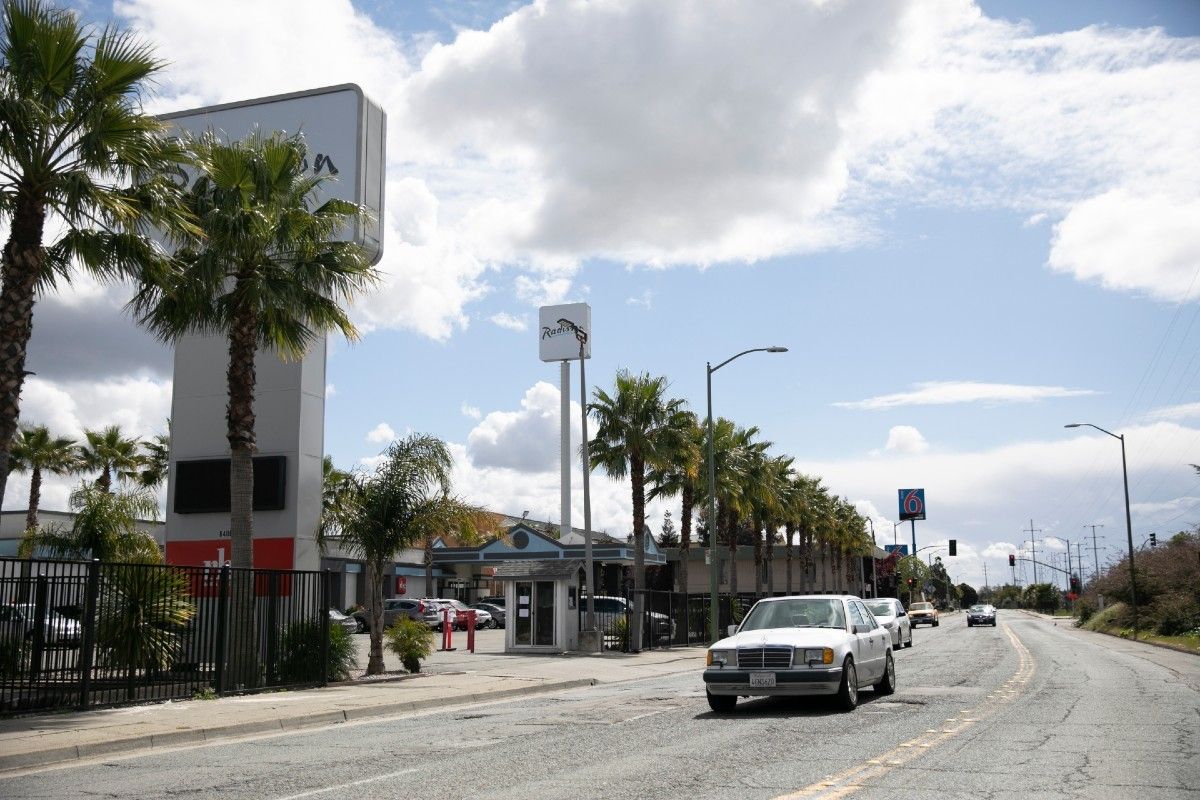 As California scrambles to protect more than 150,000 homeless residents from contracting and spreading novel coronavirus, Gov. Gavin Newsom had some harsh words Saturday for cities he accused of blocking the conversion of hotels and motels for emergency housing.

After touting the 10,974 vacant hotel rooms the state has acquired so far in a partnership with the federal government — roughly 4,200 of which are now occupied with homeless residents — Newsom charged some municipalities that have resisted the initiative with letting “not-in-my-backyard” politics interfere with a public health imperative.

(Image: A row of hotels and motels near Oakland airport on March 25. Gov. Gavin Newsom is encouraging cities to convert hotels into emergency housing to protect the homeless from COVID-19. Photo by Anne Wernikoff for CalMatters)

“I just want to encourage those cities that are blocking efforts like this to consider themselves in the context of others…to consider their actions in the context and annals of history,” said Newsom, speaking outside a Motel 6 in Silicon Valley that will be repurposed for the homeless. “They’ll judge themselves, not just be judged by others, by the extent they help the least among us.”

While Newsom declined to name specific problematic cities and praised others he said were eager to participate, his remarks suggest that the state’s unprecedented effort to convert hotel rooms to homeless housing has run up against a barrier beyond even the massive logistical hurdles of acquiring and staffing the hotels: political and legal challenges from local elected officials reluctant to allow COVID-19 positive and symptomatic homeless to be housed in their communities.

Resistance to the hotel initiative has surfaced most publicly in Southern California. The cities of Laguna Woods and Laguna Hills in Orange County, and Lawndale and Bell Gardens in Los Angeles County, have mounted legal challenges to hotels that inked emergency deals with county governments.

State, county and local governments across California have long fought over where homeless housing should be located, with few neighborhoods volunteering to devote land and resources to a population many residents associate with crime, mental illness and declining property values.

As the state prioritizes hotel rooms for the homeless who have tested positive for the virus or are symptomatic, a potent cocktail of fear is developing in some neighborhoods, say homelessness advocates.

“What is at stake right now takes this outside the realm of a conversation about NIMBYism,” said Shayla Myers, attorney for the Legal Aid Foundation of Los Angeles. “I think Gavin Newsom made the moral argument.”

A spokesman for the League of California Cities, which represents municipal interests in the Capitol, declined to comment on Newsom’s remarks.

Myers says that while she applauds Newsom’s rhetoric, homelessness advocates wish the governor would exercise more of the emergency powers granted to him during the pandemic to commandeer hotels or override zoning rules and other state and local laws cities use to mount legal challenges.

“The governor of the state of California has extraordinary authority in this moment of time to take concrete steps to address this emergency,” Myers said. “He is not using that authority to protect unhoused residents of this state.”

Beyond the admonishments to reluctant cities, Newsom on Saturday announced a partnership with Motel 6 that could include 5,000 more rooms in 47 motels across the state. While the state has negotiated a lease template with Motel 6, counties will ultimately determine whether to utilize the rooms.

Our most vulnerable unsheltered neighbors need protection from #COVID19.

The agreement with Motel 6 includes language that Newsom said will allow local governments to convert the sites into permanent homeless housing once the pandemic subsides.

Speaking with Newsom, San Jose Mayor Sam Liccardo said he hopes new rounds of federal funding will allow cash-strapped cities to avoid sending people who are homeless back to the streets. The Federal Emergency Management Agency has agreed to pay 75% of the cost of the motels during the pandemic, but funding after the emergency order is lifted is uncertain.

“We don’t want these rooms simply open for a few weeks or a few months; let’s give counties and cities the dollars they need to purchase motels so we can really aggressively address the homelessness crisis that will be here well beyond the time this pandemic passes,” Liccardo said.

In another sign that the pandemic is still not close to passing, Newsom reported that an additional 87 people had died as a result of COVID-19 in the past 24 hours, taking the state’s total death toll from the pandemic past 1,000, and that hospitalizations for the disease had ticked up 1.3%. The number being treated in intensive care units was little changed.