How Overwhelmed is California’s Health Care System About to Be?

By Rachel Becker, Ana B. Ibarra and Judy Lin, CalMatters 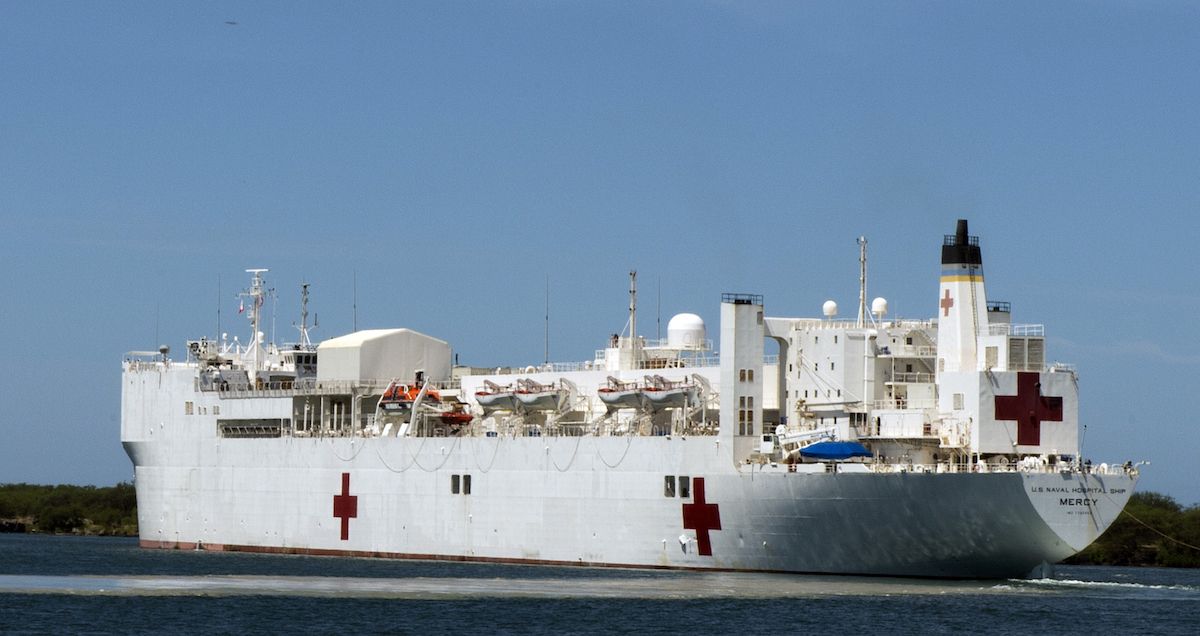 As the death toll from the coronavirus pandemic mounted Wednesday, Gov. Gavin Newsom prepared Californians for an unprecedented ramp-up of the hospital system, saying the state is procuring hotels and motels, bringing decommissioned hospitals back online and asking federal officials for two mobile hospitals and a naval hospital ship with 1,000 beds.
Projections by state health officials have indicated that California hospitals could handle a surge —right now, statewide —of about 10,000 patients. But given the potential for the virus to spread so far and so fast, some models project the state could need twice that, closer to 20,000 extra hospital beds.
(Image:  The hospital ship USNS Mercy. Credit: U.S. Navy photo by Petty Officer 1st Class Charles E. White.)
“We are laying out additional strategies and plans,” Newsom said in a Facebook address, explaining why health care capacity urgently needs to scale up. “There’s been a lot of focus in the last few days on our capacity to meet this moment and the moments to come.”
Experts say a surge of COVID-19 patients is almost inevitable if California doesn’t successfully slow the spread of the virus through social distancing measures that have shut down public gathering spaces. Although the state is not on lockdown, a growing number of counties have joined the Bay Area in requiring that all residents shelter in place, meaning people should not go out unless it’s essential. Such measures are aimed at slowing the spread of coronavirus to prevent hospitals and health facilities from being swamped.
Hospitals are bracing themselves. They have pandemic plans in place but also only so much capacity for so many bodies. An influx of patients would require more beds, staff, ventilators, protective gear —including respirators, gloves and face shields —more diagnostic tests and more of the swabs used to take samples.
One registered nurse working in the emergency room at the Kaiser Permanente Oakland Medical Center said there has been a rapidly escalating shortage of supplies, including surgical masks and n95 respirators that filter out smaller particles.
Already, the nurse said, hand sanitizer and cleaning wipes are scarce, or completely out. And some healthcare workers have stopped changing masks and face shields between patients, instead using the same ones for the duration of their shifts unless they’re obviously soiled.
Now, staff are taking dirty masks home and stockpiling them in case they run out completely. “A large number of nurses are bringing home their used masks and saving them in case we get to the point where they’re just out of masks,” said the nurse, who is keeping a paper bag of used masks in the laundry room.
Marc Brown, a spokesperson for Kaiser Permanente, said Kaiser has been preparing for months to ensure the medical system has enough access to protective equipment and medical supplies. Still, he acknowledged the stress on the medical system’s stores as the virus spreads and demand for screening increases. 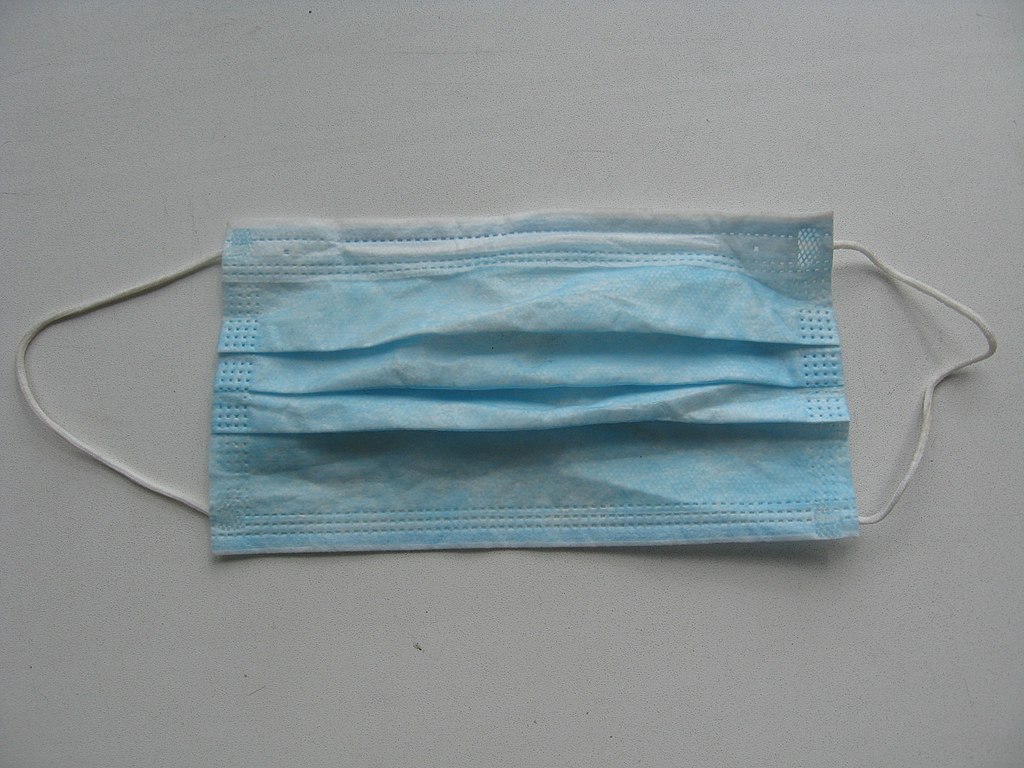 “At the same time, incoming shipments of new supplies and equipment we have had on order are now being delayed or cancelled, due to manufacturers’ supply chain challenges and a surge of demand across the global healthcare industry,” Brown said. “The increased need, coupled with the slowdown of new supplies coming in, means we are quickly moving from having adequate supplies to being at risk of running out of some needed equipment and supplies.”
Newsom said the state is pleading with the Federal Emergency Management Agency for supplies.
“We certainly are going to need more support, and we’re trying to pull on that support wherever we can,” he said.
(Image: Hospitals across the nation are running low on surgical masks. Credit: Wikimedia Commons)
Amid the ramp-up, the governor said he’s hearing directly from hospitals about the challenges they’re confronting. Newsom cited a case of price gouging in San Diego in which 3-cent masks were going for 83 cents apiece. He said hospitals have even asked seamstresses in the Los Angeles garment district to begin making surgical masks. And he punctuated the severity of the situation by describing scenes reminiscent of Hollywood thrillers.
“I heard one case —don’t over panic on this one, but this gives you a sense —where they were purchasing swim goggles because of concern about face protection,” Newsom said. “Others that were just going out and getting gloves from traditional hardware stores and grocery stores. That’s not acceptable under these circumstances.”
Clinicians echoed his concerns. One Bay Area internal-medicine physician who asked not to be identified told CalMatters her hospital has been planning since January for a potential surge of patients. It’s something the hospital typically does for flu season, but now, the calculations assume that there will be more critically ill patients.
Elective surgeries have been postponed, appointments have transitioned to telephone and video, medication refills are by mail. But the hospital is dealing with shortages of key supplies such as hand sanitizer, masks, gowns, gloves, face shields, and goggles.
“When you are running into a room, and you have to intubate somebody, you have to have the supplies on hand,” she said. “ And the ability to quickly monitor the equipment —and make sure it’s there and ready —has been hard.”
Clinicians have started eyeing other sources —dentists’ offices, closed elementary schools that may have cleaning supplies, trade schools that may have safety goggles. “In a week’s time, I don’t know if we’re going to care. I think an n95 mask is an n95 mask whether someone bought it on Amazon or whether they got it in the hospital,” she said.
Earlier this week the state Legislature approved a $1.1 billion emergency fund to help with the state’s response to the outbreak.
According to recent state data, California has 72,473 general acute beds with a 54% occupancy rate, meaning more than half were in use on a given day. The data showed the state had 7,274 intensive care beds, with a 58% occupancy rate. Newsom’s numbers on bed capacity were higher. He said the state had closer to 78,000 general acute beds.
Hospitals can create more capacity by moving patients who are not acutely ill to other settings. 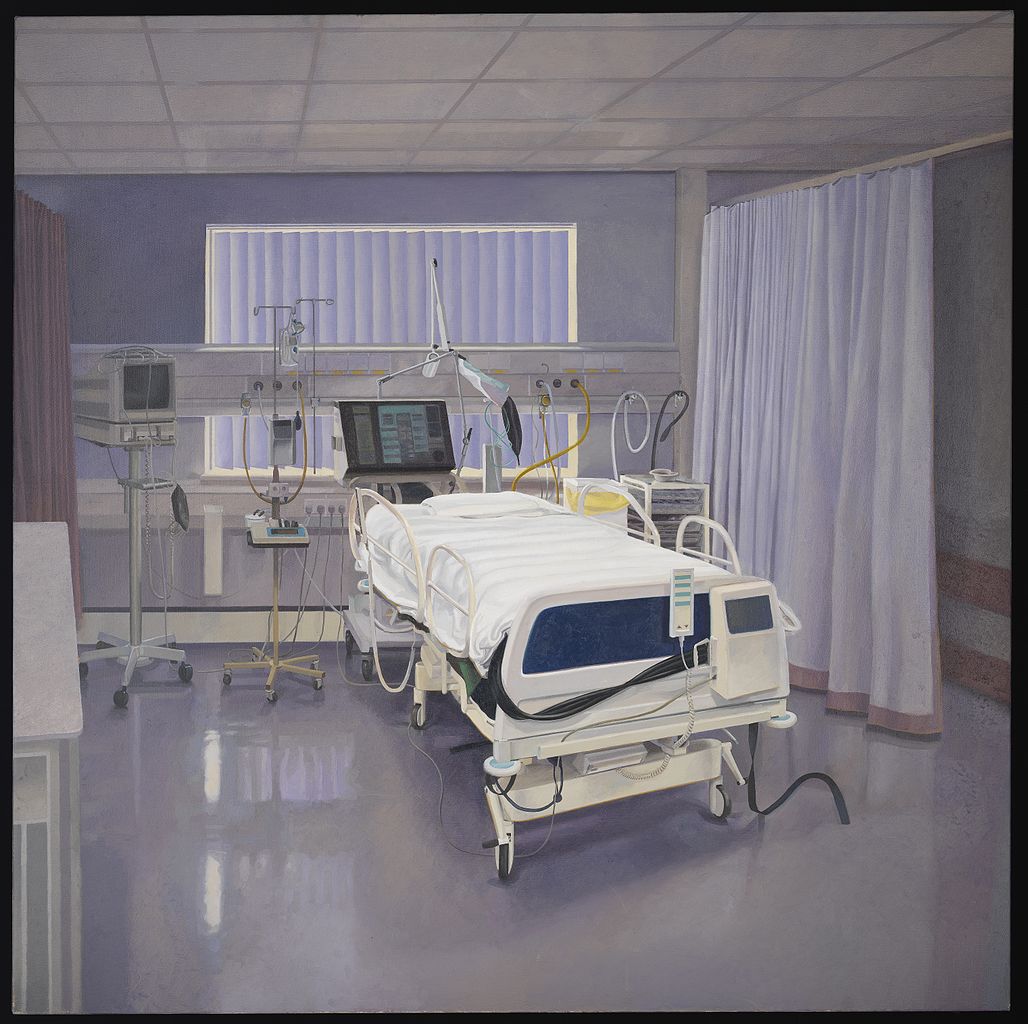 “We have an ability to shift and reshape and change that capacity based on our needs,” said Carmela Coyle, president of the California Hospital Association. “We want to maintain and reserve the hospital capacity for those individuals who are acutely ill.”
Newsom said the state is making the “modest assumption” that an average person infected with the novel coronavirus will go on to infect two more people.
One low-end projection that coronavirus will hospitalize 5% of Californians means the state is 4,000 hospital beds short. But if 20% of Californians require hospitalization, that means California will need closer to 20,000 additional hospital beds, Newsom said.
“That’s just one scenario plan,” Newsom said. “There’s others that are more modest, some that may, in some cases, be more extreme.”
(Image: A rendering of an intensive care unit. Credit: Wikimedia Commons.)
Lee Riley, a professor of epidemiology and infectious diseases at UC Berkeley’s School of Public Health, said these models are only useful to a certain extent. “Since real empirical data are now coming out of China, I would look to them to predict what would happen here in terms of hospitalization,” he said.
Besides California’s 10,000-bed surge capacity, Newsom said, the state has 11,400 adult and pediatric intensive care beds, but he did not say how many are currently occupied, or how many would be needed. “That number is misleading because that’s the entire system. We’ll need to look at that by county, by region,” Newsom said.
To add more capacity, California has procured two hospitals that he said will be announced Friday —one in northern California, one in southern California.
But Newsom added that the state also needs the federal government to chip in. One request —to ready the USNS Mercy to receive patients off California’s coast —would add 1,000 beds, as well as support for pharmacists and testing. California has also requested two mobile field hospitals, which would add 496 hospital beds each.
Quicker testing turnaround would also help, he said. As of Wednesday night, 598 people in California had tested positive for the novel coronavirus, of the 12,600 people the state has tested. But 3,215 outstanding tests still awaited results, which can take days. “We’ve got to see the turnaround on those tests move,” Newsom said.
The governor attributed the lag in results to a lack of supplies, including key test components required for extracting the virus’s genetic material and specialized swabs needed to collect samples from a patient’s nose or throat.
“Our capacity is increasing, but supplies can become increasingly challenging,” Newsom said.
Patients with severe disease may need to be placed on ventilators in order to breathe, and experts question whether the country will have enough to cope with a surge in cases like in China and Italy, where doctors were forced to make the terrible choice about how to allocate the limited, life-saving supplies.
“There’s been a lot of focus today around a directive from the administration for states to purchase their own ventilators,” Newsom said Monday. “I just want folks to know that the state of California was already of the curve. We already are procuring direct ventilators.”
The Bay Area internal medicine physician said that as hospitals decide how to redeploy staff to cope with the epidemic, clinicians have been rising to the occasion.
“We’ve been talking a lot about the tremendous pride —I’m going to cry —that a lot of people in healthcare feel right now,” she said. “This is why we went into medicine, the camaraderie that you’re heavily relying on your colleagues, and trusting one another. And, I don’t know, I’ve never felt so proud to be in medicine.”
CalMatters.org is a nonprofit, nonpartisan media venture explaining California policies and politics.