the COVID-19 deaths in the U.S. so far. David Ryder/Reuters hide caption 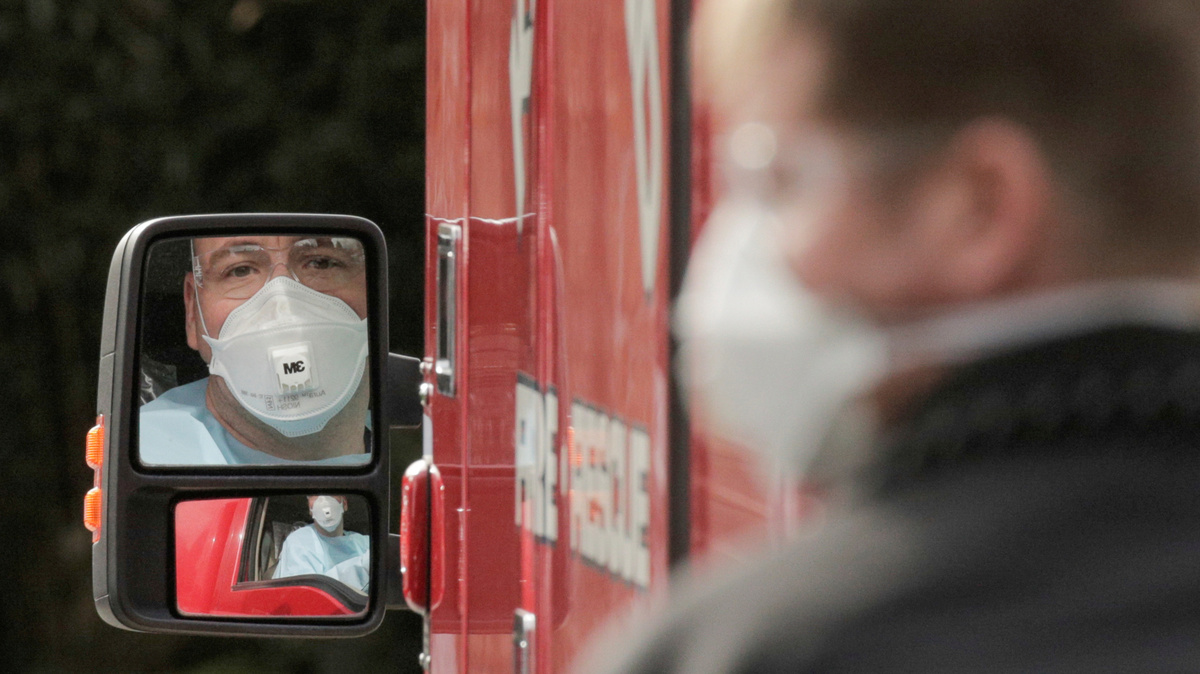 A medic drives an ambulance at the Life Care Center of Kirkland, Wash, which has been linked to most of the COVID-19 deaths in the U.S. so far.

COVID-19 has now caused at least 14 deaths in the U.S., as a Seattle-area hospital confirmed two additional deaths as of Thursday night. There are now confirmed cases of the coronavirus in 21 states, after the pathogen was found in Pennsylvania, Maryland and Colorado.

The new deaths occurred at EvergreenHealth hospital in Kirkland, Wash., which is now reporting 11 fatalities from COVID-19, a hospital representative told NPR Friday morning. Most of the people who died were residents of the Life Care nursing care center in Kirkland, which has been identified as the site of a coronavirus outbreak.

In addition to the people who died at EvergreenHealth, two others had previously died in Washington state and a third in California.

There are now 233 coronavirus cases in the U.S., according to a tracking tool created by the Johns Hopkins Whiting School of Engineering. That figure includes more than 40 people who were repatriated from outbreak locations in Wuhan, China, and Yokohama, Japan.

U.S. officials are closely watching a potential outbreak on a cruise ship that's currently in limbo, some 50 miles off the California coast. At least 21 people aboard have COVID-19 symptoms, Gov. Gavin Newsom says.

The Grand Princess, which is linked to a former passenger who died from COVID-19, is returning to San Francisco after a cruise to Hawaii — but it's now being kept from port to allow a small portion of the roughly 3,500 people on board to be tested for the coronavirus.

Coronavirus: Cruise Ship In Limbo Off California After A Former Passenger Died

Coast Guard helicopters have been ferrying coronavirus test kits back and forth from the ship; the first results of those tests are expected to emerge Friday.

Samples were collected from 45 people Thursday, according to Princess Cruises.

Officials are also working to track down the thousands of people who were on the earlier cruise from San Francisco to Mexico, and may have been exposed to the coronavirus.

More laboratories around the U.S. are finally gaining the ability to test for the coronavirus, after what Anthony Fauci, director of the National Institute of Allergy and Infectious Diseases, calls "missteps" in the federal government's plan to create, produce and distribute tests.

"We're not there yet, but soon," Fauci said of the effort to make tests more widely available.

NPR's Allison Aubrey reports, "some academic hospitals are developing their own tests and commercial options are expanding really quickly." She adds, "results can take three or four days" before they're reported to local health officials and the CDC.

How Coronavirus Spreads: A Cough In Your Face ... Or A Kiss On Your Cheek

Vice President Mike Pence acknowledged a shortage of tests on Thursday, saying "We don't have enough tests today to meet what we anticipate will be the demand going forward."

As the deadly respiratory virus spreads in the U.S., President Trump signed an emergency funding package worth some $8 billion Friday morning. The president had been scheduled to sign the bill at the CDC headquarters in Atlanta, but he opted to sign it at the White House instead, before leaving on a trip to Tennessee and Florida.