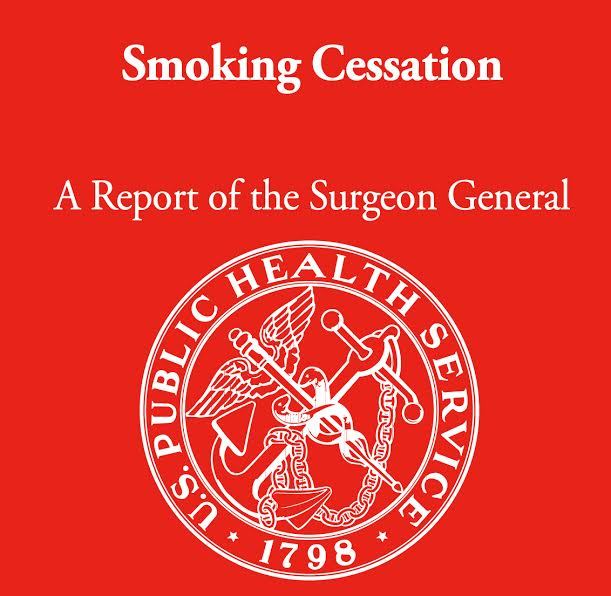 The United States Surgeon General declared in a new report last week that health professionals do not provide cigarette smokers enough support for quitting their smoking addictions and may not even bring up smoking cessation to their patients.

Interviewed about the report, Surgeon General Jerome Adams told the New York Times, “Forty percent of smokers don’t get advised to quit. That was a shocking statistic to me, and it’s a little embarrassing as a health professional.”

The report from the surgeon general also states that research has not shown e-cigarettes to be an effective treatment for smoking cessation.

As far back as 2018, Secretary of Health and Human Services Alex Azar warned that e-cigarettes contain nicotine and can act as an “on-ramp” for adolescents who experiment with smoking, even if they may provide an “off-ramp” for some adults. The surgeon general’s new report does not cite any new scientific evidence proving the usefulness of e-cigarettes for people who want to quit.

The surgeon general’s report on smoking cessation says that “nearly all adult smokers have been smoking since adolescence.” Further, the report warns that e-cigarette use by adolescents could “threaten decades of progress in tobacco control.” As the Times reports, “Millions of high school students now use e-cigarettes and many of them are struggling with nicotine addiction.”

E-cigarettes come in so many different forms that existing research cannot generalize whether they legitimately help people stop smoking, the report finds.

Although e-cigarettes do not meet the standards for effective treatment, the report noted that many adults “report using non-evidence-based approaches when trying to quit smoking, such as switching to other tobacco products.”

Dr. Robert R. Redfield, director for the Centers for Disease Control and Prevention, asserted in Adams’ report that the CDC knows which smoking cessation methods do work. Nicotine replacement therapy, like the nicotine patch, and behavioral counseling are FDA-approved as effective treatments, particularly if done simultaneously, the report says.

According to the Office of the Surgeon General, “We know that the very design of tobacco products, especially e-cigarettes, makes them more attractive and addictive than ever.”
A fact sheet from the Centers for Disease Control provides a good summary of the dangers of e-cigarettes, especially the national leader in the market, JUUL. JUUL loads “about as much nicotine as a pack of 20 regular cigarettes” in the average cartridge, the document says.

Adams’ new report adds that banning the “entire categories of flavored tobacco products, including menthol” is part of one potential strategy to lower the health and financial impacts of tobacco use.

At the same time the Trump administration has outlawed most flavored e-cigarette cartridges, it still allows vape shops to sell open-tank liquid nicotine in various flavors, according to the Times. Tobacco- and menthol-flavored cartridges and disposable e-cigarettes are also still allowed.