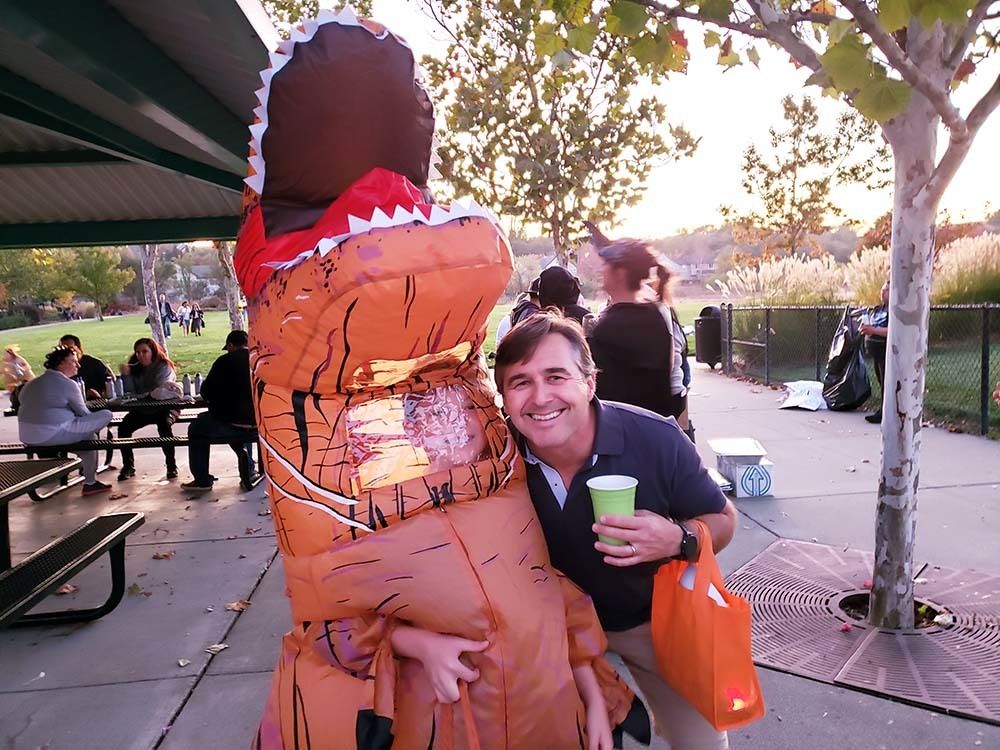 by Matt Villano
When it became clear that Healdsburg was downgrading its evacuation status on Halloween, two local women figured most people would miss out on the typical trick-or-treat experience. The women, Elena Halvorsen and Mandy Carpenter, both have kids in the local public school, and both live in the Parkland Farms neighborhood, the northernmost section of town.
(Image: David Reed and his son, Harlan, enjoy hot food at the Healdsburg Hallloween Do-Over in the Parkland Farms neighborhood on Saturday, November 2. Credit: Matt Villano)
This particular neighborhood — it's where I live, too — is famous for how it goes off on Halloween; during a typical year most residents give out 1,000 pieces of candy in just a few hours. Halvorsen and Carpenter thought about how much their own kids (Halvorsen has three; Carpenter has two) like trick-or-treating in the hood, and organized a trick-or-treating do-over for Saturday, November 2. The moms sent out a flier on Facebook and Healdsburg's Mayor, Dave Hagele (who also lives in the neighborhood) offered to help spread the word. Within a few hours, the word was out all over town: Halloween Do-Over in Parkland Farms on Saturday, everyone was welcome.
Listen: Halloween Do-Over Bringing Neighbors Together:
Other locals decided to sweeten the pot. Ariel Kelley, who is the CEO of Corazon Healdsburg, contacted the folks at José Andrés' World Central Kitchen, and they worked with another regional nonprofit, Nuestra Comunidad, to come and set up in the park to give out free hot dinners. Local police got on-board. Local firefighters agreed to come. Even the manager of the local Safeway got involved, donating more than 200 pounds of leftover candy for the event. The neighborhood braced for a bigger-than-usual crowd.
Hagele, Carpenter and Halvorsen came up with a specific route for trick-or-treaters to walk. The route included three streets: Arabian Way, Latigo Way, and Saddle Draw. The idea was for trick-or-treaters to make a big loop and end at Barbieri Brothers Park at the end of Saddle Draw, where the gang from WCK and Nuestra Comunidad would set up shop.
The festivities started around 4 p.m. Crowds funneled in by 4:30. Residents set up tables in front of their houses with buckets of candy and wine for friends. Folks came from elsewhere, parked on the street, popped open their trunks tailgate-style and set out buckets of candy of their own. A police officer showed up, parked his cruiser at the entrance to Barbieri Brothers Park and distributed candy as well. When the fire engines arrived, everyone stopped what they were doing and clapped. The truck parked at the end of Saddle Draw, across the street from the entrance to Barbieri Brothers Park, and all the kids and parents came running to thank the firefighters in person.
Volunteers from WCK and Nuestra Comunidad started serving potato-Brussels sprouts-chop meat hash around 5 p.m. They also served salad and reusable bottles of water. 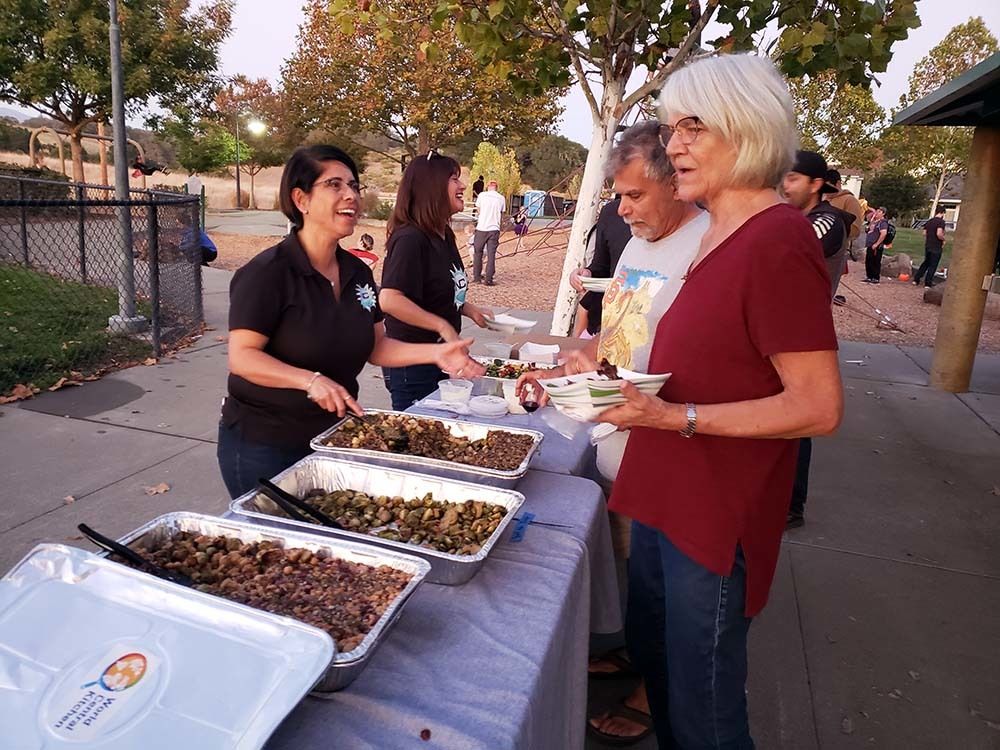 Alma Bowen, executive director of Nuestra Comunidad told me her group brought enough food for 400 people and they ran out.
(Image: Alma Bowen, executive director of Nuestra Comunidad, serves free hot dinner to residents of Healdsburg on Saturday, Nov. 2. Credit: Matt Villano)
Listen: Alma Bowen of Nuestra Comunidad on feeding the neighborhood:
By 6 p.m., the neighborhood was teeming with kids and parents met in the street hugging and pouring each other glasses of wine and beer. Many of these parents were drinking on the street right in front of the aforementioned police officer. There were no open container citations that night; instead, the officer smiled and wished passersby "Happy Halloween" the entire time.
At 6:45 pm, Hagele, an amateur DJ, blasted Halloween music and sponsored a dance party in the street right outside Barbieri Brothers Park. About 150 kids and their parents participated. When the music ended at 7 p.m., Hagele thanked the first responders, thanked the community for participating, and wished everyone a good night. The party wound down around 8 pm, though many neighbors lingered into the evening at afterparties along the trick-or-treat route.
Participants said the event typified the type of community in Healdsburg — a city where everyone looks out for each other and strives to retain the small-town way of life. In all, I estimate about 1,000 people showed up over the course of the night. It was by far the biggest and most memorable Halloween celebration we've ever had.
(Image: The dance party in front of Mayor Dave Hagele's house was a great way for Healdsburg locals to reconnect with each other -- and their community. Credit: Matt Villano) 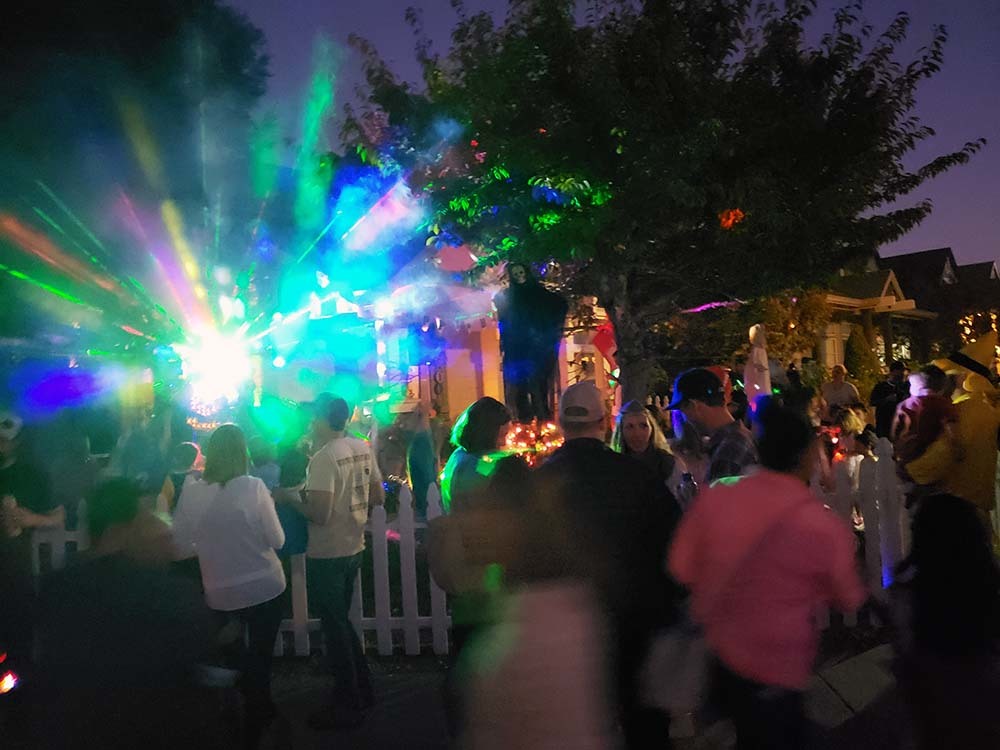