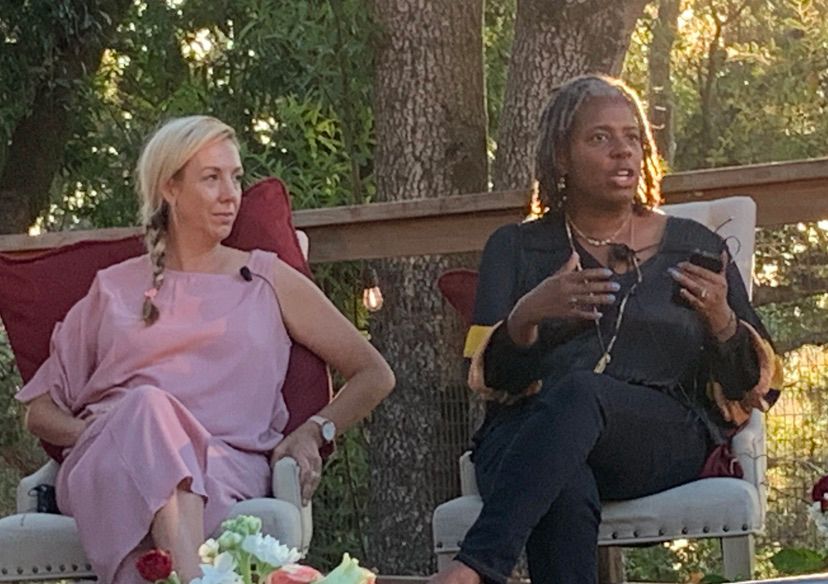 On Friday, August 16, a group of California leaders sat down for a conversation at the Paradise Ridge Winery in Santa Rosa. The panel was presented by California Human Development, a nonprofit based in Santa Rosa.
The participants were:
The panel was moderated by Karin Demarest, Vice President for Programs, Community Foundation of Sonoma County.
[Photo: Elizabeth Gore listens as Barbie Robinson makes a point. Credit: Steve Mencher]

Moderator Karin Demarest began by asking the women on the panel to tell the stories of the origins of their leadership.

Karissa Kruse shared the story of running the state organization of a marketing club in high school. “I was a super nerd, really into marketing at a really young age. I thought I was going to improve all commercials in the world so we wouldn’t have to watch bad commercials in between our TV shows anymore.”

Lynda Hopkins thought back to her childhood, as the older sibling to two younger brothers. Hopkins said she would arrange musicals, making her brothers dance and sing for their family. “I think about the role I played sort of taking care of my younger brothers and really wanting the best for them and also feeling a sense of accomplishment when they did what I told them to do.”

Elizabeth Gore said that after Peace Corps, at the United Nations, she was chosen to represent the UN to the general public. “My job was to take really complex issues and boil them down to where very busy people trying to live their lives might pay attention and care and understand, whether it was climate change or malaria or adolescent girls.”

Barbie Robinson said that as the youngest of nine children, raised by a single mother, she was in leadership training coming up behind her seven strong sisters and her mother. However, Robinson said her leadership developed when she “handcuffed [herself] to the back of a cadillac, blocking the entrance to the United Nations building in 1992,” protesting against George H. W. Bush’s position on climate change.

Following their introductions and leadership origin stories, Demarest asked the women on the panel to share how they are mentoring young women to step into leadership roles. The panel went on to give advice to young women, expressing the importance of empowering women, particularly women of color, and lifting them up to positions of authority. Along with advice on how to take the criticism, building a community of support and taking the first steps to get involved in leadership, each woman on the panel concluded the discussion with a final call to action for the people gathered at the event and for young women.

Robinson shared an Ethiopian proverb, “when spider webs unite, they can tie up a lion.” Robinson asks the audience, “Who in this room can you join your spider web with to advance equity?”

“One. It just takes one,” said Gore. “My ask of all of you is just to commit to one human that’s a woman or a girl or identifies as one. And it could be a check or your time.”

Aldana agreed with Gore, saying, “you have either time or money and both are necessary right now.” She said that despair can take over and often exhibits itself in inaction, but Aldana asked the audience to work together. “We need everyone participating to get past this dark moment for our country.”

“Money is money, time is money, relationships are money and kindness is free,” Hopkins said. Hopkins told the audience that “the people on this stage are all very wealthy in relationships” and encouraged people to build relationships with and invest in other women.

“Find your voice,” said Kruse. She said the best advice a man gave her was to ask for what you want. She had waited for people to recognize her hard work, but when she went and asked for it, that’s when she got what she wanted. “You are your best advocate. Go own your voice.”

Finally, Demarest advised women to trust themselves. “If we were to truly trust and embody the depth of our power and see it in each other and raise each other up based on that true power, I think it would be a different world.”